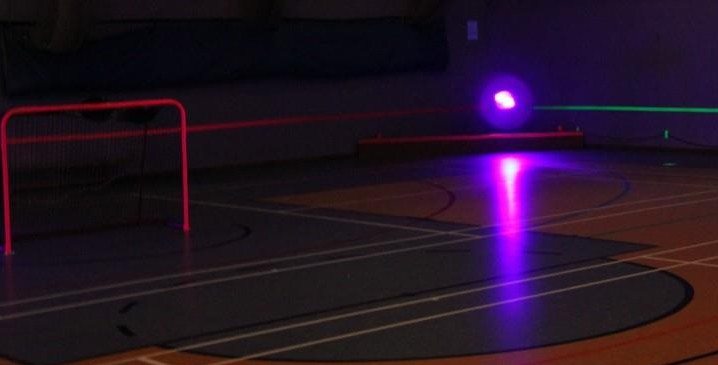 Light and dark: a picture of the Desso Hall in UV conditions. photo: Chandru Lekraj

Not many readers will be familiar with floorball. Put simply, it is an intense, fast-paced form of hockey played indoors – much like ice hockey without the ice.

Originating in Scandinavia as an alternative to ice hockey, its popularity is growing, and plans are in place to attempt to have it included in the Olympic Games from 2020.

Floorball is slowly catching on in this country too. Great Britain is currently ranked 29th of the 31 registered floorballing nations, just below the titans of Liechtenstein, but that tide is beginning to turn.

And with its members spread across three separate teams, Warwick is actually home to the largest floorball club in the country.

On the final day of last term, the club, in co-operation with Warwick Sport, organised a groundbreaking event: the world’s first recorded UV floorball tournament, hosted at the university.

With three teams, Warwick is actually home to the largest floorball club in the country

Following on from the success of other sports, the lights were turned off in the Desso Hall to be replaced by the glow of ultraviolet light.

Various clubs and societies were invited to enter a team for the full-sized, six-a-side matches, which resulted in seven teams participating, from Singapore Society to Dodgeball and Pick & Mix.

What’s more, the teams were actively encouraged to come in seasonal dress, and the array of Santa hats and tinsel on display suited the event’s title: Floorbauble.

Floorball club president Phil Redhead said: “We wanted to try something different to help promote the club and the sport, and we don’t think this has ever been done before.

“It wasn’t without its difficulties, but on the whole I think the event went well and the people I spoke to said they really enjoyed themselves, that it was fun for them to try something completely new – especially as most of those playing were not floorballers, so it was their very first experience of the sport.”

The players encountered little difficulty navigating their way around the hall, as the goals, walls, sticks and kit were adorned with high-visibility tape.

The main issue, though, was how to make the ball as visible as possible. The UV paint it had been covered with did not last long, and the trouble of keeping up with an eternally fast-moving ball in such conditions proved to be a great leveller.

As a result, every game was competitively fought, including the final, which saw Mixed Hockey and Just Stoke go to penalties after a 1-1 draw, with the latter emerging victorious.

Captain of the Just Stoke team Carl Oliver said: “It was an exciting tournament despite us not always showing great skill.

“The game was very easy to get your head around, and the occasional inability to see the ball really levelled the playing field, resulting in a fun and competitive tournament.”

The problem with seeing the ball did meet a solution towards the latter stages of the tournament, as the UV tape gracing the sticks was added to the ball, which only slightly affected its mobility.

While this issue proved to virtually aid the players’ enjoyment, the goalkeepers and referees found their job all the more challenging.

The flow of play was thus seldom interrupted by barely visible infringements, and the goalkeepers were given a very stern test.

Chandru Lekraj, goalkeeper for the club’s second team, insisted: “It was almost impossible to see the ball as a goalkeeper, so most saves I made were just pure luck!

“Overall, though, it was great fun and an event I hope will be done again next year.”

Following this endeavour, floorball can now be added to the list of clubs which have teamed up with Warwick Sport to successfully try out UV.

These include squash and zumba, while a UV Roller Disco is set to take place in the early part of this term.

Warwick Floorball Club, however, now holds the honour of having hosted the world’s first recorded UV floorball event; something they take pride in as they look to boost membership yet further.

Redhead went on: “The club has grown hugely in the last three years, which has meant we’ve been able to put on events like this. It’s really encouraging to see something that’s very underrepresented in the UK being played and talked about on campus.

“We would definitely consider doing it again, and we’re also currently looking at other potential exciting events to try to raise more awareness of the sport.”

The sport is effectively a new innovation in the UK, and the UV event was certainly an innovative idea, but one which proved a hit and provided a great afternoon’s entertainment to herald the end of the sporting year.