“Girls and women, show your anger!”

**You wrote in the New Statesman earlier this year that addressing the hatred of women should be a priority issue for feminist campaigners. What is, in your opinion, the most obvious manifestation of misogyny in British society today?**

There are many examples, such as the fact that current or former partners kill two women a week. ‘Domestic’ violence and rape have become totally endemic. There are numerous cases of regular sexual harassment on the street and in the workplace.

Furthermore, we must recognise the severe under-representation of women at all levels of meaningfully powerful professional life, both in public professions (ie. politics, the arts and culture) and non-public (ie. medicine, law, business). Equally important, the trend of victim-blaming, the excusal of perpetrators of rape and other kinds of violence, the disbelieving of victims…

In short, there are too many manifestations to choose just one, which is why I tried to identify the contempt and derision which are the common factors in all types of treatment of women, all over the world.

**Do you think the Leveson inquiry has adequately addressed the issue of the tabloid media’s representation of women?**

Leveson hasn’t given his recommendations yet, but I am surprised that the issue of the representation of women came as such as surprise to him. It is even more surprising that he had to call in women activists and commentators to provide evidence on what is after all, completely obvious to anyone (male or female) who reads the tabloids.

This goes way beyond the issue of Page 3 (although I of course support the campaign to get rid of Page 3 images) and encompasses all of the following: the smearing of women in public life from female politicians to female pop stars; the way sexual violence and gendered murder cases are reported and the reinforcement of myths about these types of crime; the way women are depicted and described; the under-representation of women as speakers, academics, experts and endorsers rather than victims, case studies, objects; and much, much more.

If we are really to live in a world which is free of misogyny and the violence and inequality it supports, we need a total overhaul of the media, culture, politics, everything, in terms of personnel, values and policies.

I do think this can happen – but there’s an awful lot of wilful blindness going on, and people are generally very resistant to change. I’m not, though.

**You started writing at a remarkably young age. What inspired you?
**
Enthusiasm for the world – there was literally nothing I wasn’t interested in – and a great desire to participate, to meet people, to think, to write, to analyse, to speak.

I wanted to be a shaping part of the culture I so enjoyed and I was lucky because I wasn’t shy. I was in no way a bookworm as a kid or young teenager. I was the opposite: an art-worm. I went out all the time and naturally gravitated towards journalism as it is wholly world-facing.

I have never, ever hung around my bedroom daydreaming. I knew I wanted to be a journalist at 13 and by 14 I was doing it. I think the key to a fulfilling and successful career is to do what you love.

**What are the obstacles to greater representation of women in public life?**

There is only one obstacle and that is misogyny.

**Your latest book _Beyond the Wall_ looks at Palestinian life under occupation. Is there a solution to the Israel-Palestine conflict?**

I am one hundred percent against the military occupation, the quasi-apartheid atmosphere of Jerusalem, the illegal settlements and the annexing of land rich in Palestinian families’ olive groves. I favour a two state solution and am extremely disturbed by the latest thinking on this issue: that the settlements infiltrating and bordering Palestine are so plentiful and strategically placed that a two state solution would not be workable.

I address all of this in _Beyond the Wall_; a chapter towards the end includes an analysis following my study of the latest UN Access and Closure map of the region. I hadn’t realised how strategic and how dire the situation was until I looked at the map. You can see how co-ordinated the planning and building of the wall and the location of settlements, roadblocks, refugee camps and checkpoints is. The goal is to completely break up Palestinian society economically, geographically, politically and psychologically.

**Some black feminists have objected to SlutWalks on the grounds that black women feel unable to appropriate the racialized stereotype incorporated into the word ‘slut’. Is trying to reclaim the word an objectionable project, particularly for black women?**

Yes. I am not about to call myself or any other woman a slut or spend a lot of time turning myself inside out to reclaim, reappropriate or invert particular words. It strikes me as subservient rather than radical to take a word that is used against you to express hatred of you and basically make it all okay.

But I totally support the underlying purpose of SlutWalk. We mustn’t forget what prompted it: an American police officer victim-blamed women who survived the endemic sexual violence committed against us. Perpetrators of sexual violence all over the world now know they have an ally in that police officer.

**What’s the hardest part of your work?**

I feel great despair at the repetitiveness of much of the gender and human rights activism I do: having to say, again and again, that survivors of rape are not to blame in any way for what has been done to them. Having to count up just how many – or rather, how few – women there are in any area of the media or public life. Trying to communicate something urgent and coming up against a wall of denial, hypocrisy, messenger-blaming, victim-blaming and derailing. But aside from that, I love being a journalist and commentator as I have the freedom to do whatever I want. And I have complete faith that reportage, witness, testimony and simple truth-telling do make a difference, or at the very least connect with many others who feel the same way.

**Do quotas for women and ethnic minorities work?**

Yes. People seem to be in denial of the fact that patriarchy has, for the last 3000 years, all over the world, been one massive act of high-quota positive discrimination by men for other men. Now, we’re going to do it the other way and if the chaps don’t like it, tough. I am bored by misogynists and their misogyny and when they talk I just hear a low grinding noise and think about something else. We tried it the patriarchs’ way for 3000 years. It was rubbish. Time for the overthrow.

**Have you been following the US Presidential election?**

I haven’t been following every twist and turn but of course I’m interested in the debates and appalled by how out of step the Republican Party are in terms of their stance on women’s control and ownership of our own bodies, sexual violence, gendered roles, religion, the welfare state and… Put it like this, I’d be standing in the same corner as Barack and Hillary.

Although I do wish Michelle Obama would step up and be the politicised, highly intelligent, driven, vocal activist we all know she really is, instead of playing at being a black Doris Day housewife type. There is no need for Michelle Obama to pretend to be this docile First Lady type. You’re in the White House, woman! You’ve got a Harvard degree! You were the family breadwinner while your husband climbed the greasy pole! Now ditch those unthreatening 50s cardigans and circle skirts and run this joint!

**Is there anyone you would like to debate with?**

No, I don’t get involved in interpersonal back and forth, ever. Not even on Twitter. Sometimes debates just make all parties more entrenched. But there are many people I would like to meet and learn from, from Aung San Suu Kyi to Hillary Clinton to Nawal el-Sadaawi to the three amazing women who won the Nobel Peace Prize this year to the many women who led protests during the Arab revolutions.

I’ve got a few on the go at the moment: the novel Swimming Home by Deborah Levy, which is shortlisted for the Booker; a very enjoyable joint history of Elizabeth I and Mary Stuart by the German academic Anka Mulhstein; and the military strategy manual The Art of War by Sun Tzu because I need some career help at the moment! The next thing I want to read is Citadel, the latest novel by Kate Mosse. I know her via the Orange Prize for Fiction, which I fully support. 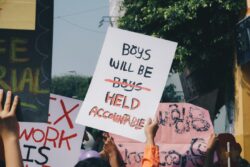 Anything you can do (I can do just as well) 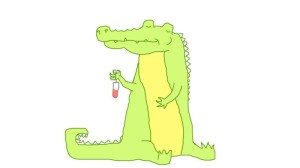 The ongoing battle of the tampon tax