TV is dire at the moment.

For some reason the Loose Women are still allowed to screech in the daytime, Gok Wan still molests fat women at night and the rest of the day is punctuated with those bloody annoying adverts voiced by an unlikely host of regional accents who are united only in their ability to somehow talk with their mouths full. If you don’t know what I’m talking about, imagine Tom Baker with clogged arteries speaking through inflamed cheeks and you’ll get the picture. Without a doubt, the best example of this is the man on the Mr. Kipling adverts, who sounds like he’s just about to have a heart attack. He somehow manages to wheeze on about how delightful and whimsical Mr. Kipling’s cakes are, but I’m still filled with concern. With a voice that obese, this man surely has diabetes? At the very least, he’s headed for a stroke. My concern for his health and my lack of desire to buy his snacks aside, the man is still ruddy annoying.

Not that this is anything new. Derren Brown has been torturing audiences for years with his smarmy ‘I’m vaguely posh and slightly rapey’ sneer, and although I keep hoping that his television career will expire (anyone who saw his awful attempt to make people stick to their seats should agree. If it worked, it wasn’t magic that kept you there, it was Derren’s Rohypnol eyes), I know that he still has popular appeal. For some reason, he is still relevant enough to merit the commissioning of endless series on Channel 4. The fact that I tune in every week just to mutter vague obscenities about him being arrogant and creepy probably does not help.

I try to convince myself that I’m just watching the wrong shows. Perhaps I’m sadomasochistically hunting for crap? Has watching too much Murder She Wrote over the holidays eroded whatever was left of my brain after RuPaul’s Drag Race? Should I make like Moira Stewart and just leave TV-land forever?

Well, no. The truth is, I quite like the crap. Yes, the new ‘let’s film this like a serious documentary’ Hollyoaks annoys me immensely, but I still want to know if crazy Newt is going to kill anyone. Yes, America’s Next Top Model is essentially an hour of Tyra Banks screaming “LOOK AT ME!”, but I really really care about who’s going to ‘be on top,’ win that covergirl commercial and fade into the forgotten library of TV history along with every ex-Big Brother housemate.

Speaking of which, I would like to make a confession. I once wanted to be part of the crap. I wanted to contribute to the steaming pile of excrement that is British entertainment TV. I auditioned for Big Brother. I advanced through the initial Birmingham auditions, two London auditions and a psychological and psychiatric evaluation where I was told that I was both “too naive” and “the most sane person I’ve seen all day.” Along the road, I met people who told me earnestly that going on Big Brother was their life’s ambition. It was hilarious to see antsy Page 3 models and pouty muscle boys awkwardly flirt and shout abuse at each other for the sake of the cameras.

Like the bloated cheeks of the Mr. Kipling man, we’re headed for an explosion. Surely such self-centred delusion can’t continue forever? But even after Big Brother’s funeral next year, I doubt much will change. In ten years we’ll all be tuning in to see Derren Brown showering with Gok Wan on I’m a Celebrity… 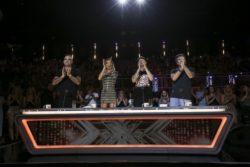 The death of the talent show