At fifty-three years old Lars Von Trier is not so much l’enfant any longer, but he’s certainly still terrible, to which the furore accompanying Antichrist attests. Condemnations of misogyny have dogged the Danish filmmaker throughout his career: he mutilated and murdered Emily Watson in Breaking the Waves; hanged Bjork in Dancer in The Dark; repeatedly raped Nicole Kidman in Dogville; and now he, apparently, posits Charlotte Gainsbourg (and all womankind at large) as evil incarnate. The fact that he has recently suggested himself as an analogue for Strindberg certainly doesn’t help dispel such accusations and, ostensibly, neither does Gainsbourg’s nuevo-erinye catatonics and the resultant graphic violence which feature so prominently in the film (the latter of which being the reason for much of the controversy).

The debate, though (with the exception of one furious Daily Mail incendiary who would apparently rather inflict the torture endured by both central characters upon Von Trier than have it pollute our cinema screens), has mainly been fought on the grounds of whether actually showing the grisly is ‘necessary’ (as if anything in art is ‘necessary’). This evokes the Hays’ code era contention that intimating and not showing requires more creativity blah blah…and is entirely missing the point. The scenes of extreme violence are not about Dafoe ejaculating blood or Gainsbourg circumcising herself with rusty scissors; they are Dafoe ejaculating blood or Gainsbourg circumcising herself with rusty scissors (not literally of course, although I’m sue Von Trier was as disappointed about this as he was when the cast of The Idiots refused to actually take part in an orgy)

As the director has stated, “Scenes were added for no reason and images were composed free of logic or dramatic thinking” and so for these gruesome moments a symbolic train-through-tunnel-innuendo simply would not suffice as it does when the audience need to know, say, that the central characters’ husband is having an affair. The film’s punctuations of visceral sensationalism do not serve any propulsive narrative purpose: coherence leaves by the window when the disembowelled fox sings at the end of act two. These moments should be considered on the same level as the remarkable reprised cutaways to claustrophobic disembodied close-ups of Gainsbourg’s body parts (which are accompanied by brilliant sound design – insufficient kudos seems to have gone to Kristian Eidnes Andersen for this job) in that they might not be ‘necessary’ but they’re surely effective. As that often subversive streak in populist mainstream banality Roger Ebert has so succinctly put it: “In this case, perhaps, a film should not mean, but be”

What lets the film down far more than its middle-England baiting ‘degeneracy’ (which, according to the aforementioned tabloid demagogue, fully confirms “our jihadist enemies’ view of us as a society in the last stages of corruption and decay”) is its frequent silliness. One would assume that a work which is so candid in representing sexualised violence would also attempt to keep the unintentional hilarity to a minimum, but there is much in this film which seems almost to invite adolescent snickers.

For example, the sequences wherein Dafoe’s character ventures out into nature and finds its arbitrary evils abound (instances which find a fun parallel in Stand by Me’s Lachance-sees-a-deer scene: the difference is the dead foetus, folks) suffer from atrocious GCI and a sense of unjustified portent; the prologue’s tenderly shot black-and-white deep-focus sequence would be as adept a parody of art-house prestige as Barney Gumble’s film-festival winner (not to mention the slo-mo penetration: watch Dafoe’s cock-double’s balls slap against the thighs of a vagina-for-hire so gradually that you can see each bead of sweat!) and the film also provides a wealth of quotable one-liners, from the already ubiquitous “Chaos reigns!” to “But there’s no such constellation…”

Yet what everyone seems to have forgotten is that much of this sensory assault, whether laughable or affecting, probably takes up little more than a third of the film. The rest of the work is a sensitive portrayal of one woman’s handling of her grief over the death of her son, and so a consideration that Von Trier wrote and shot the film while suffering from severe depression should nullify the catcalls of woman-hater. Of the film’s only two characters it isn’t hard to guess who Von Trier must have identified with most, and within this context the fact that we are mostly epistemologically aligned with Dafoe’s smug therapist (who we can assume Von Trier has had his fill of) seems almost irrelevant. The same goes for the trivial narrative points such as the revelation of their child’s fractured feet and Gainsbourg’s apparently nefarious scheme from which it resulted. The intensity of the film’s culmination(s) should instead be read as the manifestation of the absolute despair and hatred for self and the world at large experienced by depressives, and such claims can only be reinforced by Von Trier’s admission to the use of automatism in writing the script.

Since his Dogme ’95 eureka, Von Trier never fully quashed the expressionistic streak so evident in early work such as Europa or The Element of Crime, and now in the last half of Antichrist it comes to the fore once again. Those disappointed that the filmmaker seems to have lost his stylistic asceticism should consider Antichrist’s extended coda as a longer version of the almost-as-ludicrous bells in heaven conclusion to Breaking the Waves. The raw human melodrama which paved the way for that film’s ending and lent it a poignancy which belied its preposterousness is still present, only here the preposterousness outweighs the poignancy. 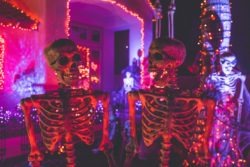 The Umbrellas of Cherbourg at 50