I can understand why Michael Grade left ITV this week. Aside from the fact that it is generally a god awful channel that accommodates my future best frenemy, Jeremy Kyle, I can’t think of one occasion in the past year when I’ve honestly felt like I have to stay in and watch ITV.

Even when I watch television just for the sake of not working during the daytime, their programs make me want to go out and plough the fields just to escape those terrible Loose Women. Any programmer who thinks that watching those delusional and menopausal ingrates in a debate over the merits of the latest Duncan James calender is entertaining needs to make like Richard Nixon and leave. The fact is that ITV actively encourages people not to watch TV. If you’re a fan of The Bill, then you know that you can probably miss a couple of years of it and still manage to keep on top of what’s going on. The same can be said of Heartbeat, Emmerdale, The Royal and a whole legion of programs that I’ve simply forgotten exist.

Then there’s ITV2, which makes BBC3 look like a high class, intellectual channel. Dominating its limp roster are re-runs of centuries-old episodes of Homes From Hell, Paris Hilton’s BFF (it’s almost fitting that the most rancid woman in the world is on the most pointless show in the world) and, God forbid, all that’s going on in the land of Jordan and Peter. Ladies and gentlemen, I have a confession to make: I am mildly appreciative of Victoria Beckham, so a few of my dead brain cells actually got quite excited when she made her television program about moving to America. She has an acerbic tongue and a wicked sense of humour. It was a laugh a minute mockumentary, I kid you not. However, these few dead brain cells let me down somewhat by deciding that I might emulate that Victoria Beckham moment by watching Jordan and Peter: Stateside. I managed to stomach about five minutes of it. I had cheated myself by believing that the celebrity equivalent of ALDI’s own brand would be as tasty and satisfying as a millionaire shortbread from Marks and Spencer.

Surprisingly, I do not believe that these awful programs led to Michael Grade’s demise. Even though I don’t like Jeremy Kyle, I know hundreds who do. Including my Gran. Without Loose Women, the increasing legions of unemployed would have nothing to watch other than Cash in the Attic. Without Heartbeat, old people would drop dead from all the excitement that pervades the rest of television land. Heck, Paris Hilton’s BFF might even keep a few potential teenage mums off the street and out of Jeremy Kyle’s hellish studio. And people who read ‘Love It’ and ‘Take a Break’ might enjoy Jordan and Peter’s many shows. It’s a long shot, but they must have some sort of audience. I will even go so far as to say that I enjoy watching Poirot and Midsomer Murders on ITV1. When I was younger, I used to have to record them in secret because my parents had banned them for being too violent. Granted, not that many people would share the same thrill that I get from watching Tom Barnaby slowly and ineptly solve another multiple murder case, but Midsomer Murders will forever be a symbol of my rotting affection for ITV.

So, why did Michael Grade go? Avoiding the obvious answer that he was fairly terrible at attracting advertising revenue, I believe that the answer lies in one very special woman. One woman who transcended not only ITV, but the world. One woman who stole my heart the moment that she opened her mouth. Oh, Susan Boyle, you had me at ‘I dreamed a dream…’ If you don’t know who I’m talking about then I truly believe that you’ve been living under a humongous rock for the past couple of weeks. Susan Boyle’s triumphant turn on Britain’s Got Talent has attracted over 50,000,000 views on Youtube. To put this into perspective: Obama’s inauguration speech has only had around 4,000,000 views. That’s right, Susan Boyle is bigger than Barack Obama. Fact. She is a divine creature sent to turn the judging finger of the viewing public away from the obese, unemployed and generally freakish back onto themselves. She’s deep. She chose Britain’s Got Talent for one reason: because it’s on ITV1, the channel that is home to the bear baiting Jeremy Kyle, the faux concern of Phil and Fern and the abusive charm of Vernon Kay. In the seven minutes that she elegantly graced our television screens, she laid a delicately knitted quilt of shame over the nation, suffocating Michael Grade in the process. For killing the Wicked Witch of TV, Susan Boyle, I salute you. 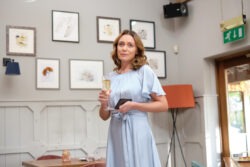