Perhaps I’m being cynical, but Naked: Beauticians seemed to be nothing but sanctimonious bullshit, taking advantage of the vulnerable and gratifying the egos of the sofa-psychiatrists who spout tripe like ‘bringing the inside outside…find within yourself…’ Headed by Jonathan Phang (the BBC’s fatter, less exuberant version of Gok Wan), this was the BBC’s trashier version of Gok’s How To Look Good Naked. Taking place over the course of four whole days – apparently the ideal amount of time to tackle deep-seated personal issues – Phang seems to believe that dragging these people, in his own words, ‘kicking and screaming’ through banal activities before literally forcing them to derobe in front of the television cameras and a group of discerning artists will actually help their self esteem. I fail to grasp the logic here.

One of the girls, Ruth, was absolutely terrified by the whole experience. She was fat and she knew it…and so did everybody else, including Phang and his guard-dog doctor type lady. That was the problem. They made her shout ‘I AM FAT AND UGLY’ at the top of her lungs. Thrice. Everybody whose eyes weren’t hidden behind an impenetrable life-makeover gloss could see how distressed she was. But, darling, since it makes for ‘good TV’, she’s given a hug and then pushed aside.

Naked… exposed two key malaises in society that surface (like mould on a stale loaf of bread) only in television programs as utterly useless as this. On the one hand, we have people like Ruth who seek validation. I am not ignorant of the fact that she knew that she would be on television, but I still feel as though she was tricked. ‘I feel beautiful,’ she says, through gritted teeth, at the end of the program. After all, this is the stock response of a vulnerable contestant lifted from the rank of obscurity into an embarrassingly exposed position before being flung back into her unglamorous, lonely existence. I can’t help but feel that the whole television experience was the attraction for Ruth and the majority of the contestants – for an hour of their lives, they were valued and cared for by thousands of strangers. Except…the audience doesn’t really care. The audience judges. The only people who are oblivious to this blatant abuse, sadly, are the Ruths of the TV world.

On the other hand, we have people like Maria. Maria had absolutely no issues with her self-confidence and was obviously on television in some vain hope that an hour on BBC3 would show her inflated boobs to the world and make her famous. ‘Yeah, I want to be a WAG,’ she says, ‘what’s wrong with that?’ Even Jonathan knew that she was on TV for the sake of being on TV, but she was kept on because, darling, a lady as voluptuous as Maria makes for excellent television.

Naked… is a vile program. It is obese with patronising intolerance, and I leave you with my dying – and probably useless – plea: Save our Ruths!

How the Simpsons would cope in lockdown 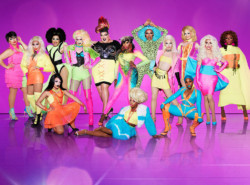