I cannot tell you how excited I am about the new series of Celebrity Big Brother. I am, shamefully, a Big Brother fiend. Last year someone bet me ten pounds that I could not name every single house-mate who had ever (dis)graced the Big Brother house, and I left him ten pounds poorer.

I am not proud of my obsession. If they had support groups I would attend them for the sole purpose of finding other, whisper it, addicts, to share my salacious daily fix. I suck up Generic House-Mate #311’s movements like a pig hunting for truffles. Of course, unlike the pig, I recognize that there is little to gain from my activity (so why do I feel so good?), and that my brain is slowly being numbed into believing that I WILL care about who-so-ever I decide to support in that television studio FOREVER. I create divisions between me and my friends if they hate on Generic House-Mate #311. Or, even worse, if they hate on me, because although I am not proud, I am not ashamed of being a Big Brother addict. Like the Spartans before me, I stand up and exclaim: I AM BIG BROTHER!

So, back to this year’s offering of pitiful celebrities. I had anticipated their imminent arrival by gorging myself on the celebrities who were rumored to be moving in to those hallowed walls. I found out so much about the president of Sri Lanka, Mahinda Rajapaksa, that I was almost devastated when he didn’t appear on my television screen. Instead, we have contestants who excite exclamations of: ‘oh! Is she/he the one who..?’ (or, in the case of Tommy Sheridan just, ‘who?’). The early favourite, and probable winner, is Verne Troyer, who many of you had the good fortune to meet a few weeks back. Well done, you now have the privilege of claiming that you met a celebrity before he became a megastar. Because Celebrity Big Brother does transform celebrities into megastars, doesn’t it? Just look at…Chantelle? Oh! Or Jodie Marsh! She’s…kind of known. Or Jo from S Club! She played at Warwick last week and everything!

My past week has been spent learning more about the lead singer from A1, the skanky looking one from the Sugababes and the singer of Gangster’s Paradise than I ever thought I would. Most of my pleasure, however, has been derived from the softly spoken LaToyah Jackson. Who knew that a woman who has no friends could have led such an exciting life? She is her own walking headline-maker: I was forced into marriage! In Vegas! By my manager! And wasn’t allowed to escape…for six months! Michael Jackson and I were Jehovah’s witnesses!, Michael Jackson’s FINE! ABSOLUTELY FINE! According to the fat one from Shameless, La Toyah is a ‘walking enigma’ and I absolutely agree. If she hadn’t had plastic surgery, however, she might be less ‘enigmatic’ and more just old, unlike the format which, in my opinion, feels as fresh as ever. Viva la Big Brother! 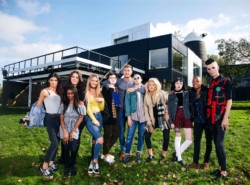