In a close game which saw Warwick make a poor batting start, spirits were lifted as some excellent bowling saw Birmingham dismissed well short of the target required. The real success on the day however, was not on the field but more off the field. Over a hundred students from the University of Warwick came to watch the clash and were shipped into Birmingham in order to see the historic event. The match was scheduled to take place before the Warwickshire v Worcestershire Twenty20 match later in the evening. The day started early with students arriving at around midday to see the clash between the two local rivals. Turnout was good, with a large number of travelling supporters from Warwick making the trip to Birmingham. The day started off extremely well with the Warwick students getting a chance to cheer their side onto victory and see them lift the cup after overcoming a pugnacious performance from Birmingham.

The entertainment continued, as shortly after Warwick’s victory the professional cricketers were out onto the field in a thrilling game of Twenty20 cricket which saw plenty of sun, sixes, and success with Warwickshire romping home by 36 runs.

This was the first fixture to take place between the University of Warwick and the University of Birmingham at Edgbaston. However last year’s Match Secretary and this year’s President Daniel Sutton was confident that it would be the first of many. Daniel stressed that he was keen to cultivate further sporting links between the universities, and that that he believed that the fixture could become a big part of the sporting calendar at Warwick in the future.

The UWMCC has said that it intends to try and schedule another match between the Birmingham and Warwick this summer at Edgbaston again, and they will be hoping for an increase in support from Warwick Students in order to make this an event which can really make for a better turnout next year. 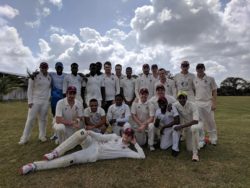 Why you should join… Men’s Cricket