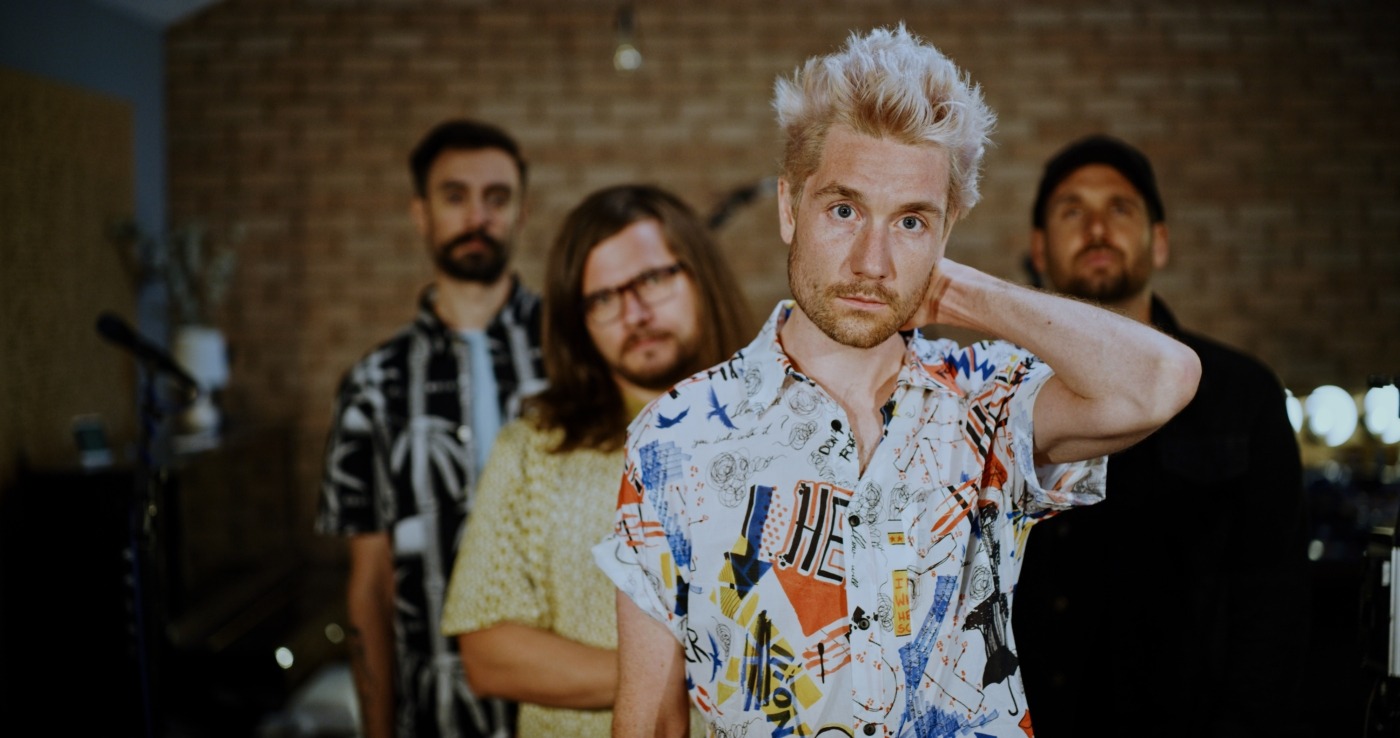 Bastille released their last album Doom Days way back in June 2019, a record centred around the experiences of a night out. Now, at a time when pubs and clubs have a curfew, Bastille are moving on and releasing new music with a distinctly different sound.

They have released two singles in the last three months: ‘WHAT YOU GONNA DO???’, collaborating with Blur’s Graham Coxon, and most recently ‘survivin’’. Over a Zoom call, I chatted to Chris ‘Woody’ Wood,  Bastille’s drummer/percussionist, to find out more about their new singles and the musical direction of their impending 4th album.

Woody: Ah mate, I think everyone’s had very different experiences of lockdown. My one’s been centred largely around trying to tame two small children 24/7. Apart from that, I’ve been, I guess, quite busy. I’ve set up a record label, so there’s an artist who we’re releasing through there called Ulysses Wells, from Banbury. I’ve been recording drums for other people as well, there’s been a couple of releases that have come out, and doing Bastille stuff obviously as well as that. I’m quite bad at doing nothing. It’s still very surreal times because I was fully expecting to be out on tour and stuff this summer, but it didn’t quite pan out that way.

W: It would be the new IDLES one, I’m obsessed with that at the minute, Ultra Mono. It would be probably Queens of the Stone Age, Songs For The Deaf, its just one I never seem to get bored of. What else? It’s a tough one. Going to say Dr Dre’s 2001.

C: Now that the era of Doom Days has come to an end, how did it feel coming out of it, to then look to start something new?

W: Ordinarily, in non-Covidy times it would be quite exciting. We would be thinking about not only the music but the whole creative, aesthetic and concept around the tour. Which to an extent, that still exists – that’s still part of it. I just don’t know if we’re going to be able to get to play at all next year, to be honest. No-one knows. The rules keep changing, week to week almost. It’s been different but also I guess it’s been quite cathartic just being able to still make music and feel like you’re part of a band. It’s been a very, very weird few months and kind of watching our industry kind of crumble a bit and, well, be outright abandoned by our government in many ways as well.

C: Since the end of Doom Days you’ve released two singles. The first being ‘WHAT YOU GONNA DO???’ which features Graham Coxon from Blur. How was it working with Graham?

W: Well, it was very distant. It was more sending parts back and forth on email and getting on calls. I’d love to say we got in a studio and all riffed it out together in the same place. That was our first experience of making lockdown music. I’d like to see him face to face at some point.

C: There must have been some unexpected challenges having to record everything remotely.

W: Yes and no. It’s not too dissimilar to the way we operate normally, I suppose. Songs would start out like on a laptop or in someone’s bedroom, then we’ll go to a rehearsal room together and just knock it out. That one aspect hasn’t really changed. Other than that, I’m really fortunate in that I’ve got a drum studio at home as well that I can record in, so it’s not really going to stop us from making stuff, but obviously just changes it a little bit.

As I’m sure everyone’s very aware now, it’s not as easy as doing things face to face, we’re having to do it over Zoom now being in different houses when we’re trying to work. I think, largely speaking, we’re OK, it’s the other acts and people in the industry I really worry for and despair for. There’s going to be so many acts who should have had their kind of break out summer this year at festivals. I keep mentioning Celeste a lot, she won Critics Choice at the Brits. This would have been the summer she would have gone and done every festival under the sun and really got herself out there but that’s been taken away from her now. It’s wholly unfair. It feels quite bleak at the minute, but I’m sure it will become good eventually.

Everyone would think, being the title track, that was a sort of centrepiece. But it’s quite the opposite. We just kind of threw it together at the last minute

C: I’m sure that there are going to be some massive plans, not just for Bastille, but for everyone, once we start to return to a place when we can go and do live shows.

W: I hope it’s sooner rather than later. There’s going to end up being a bit of a talent drain in the industry if we’re not careful because people aren’t going to put their lives on hold forever. They’ve obviously got families to feed, mortgages to pay etcetera.

C: Bastille’s latest single ‘survivin’’, is not only sonically very different to the familiar Bastille sound, but also different to ‘WHAT YOU GONNA DO???’. Can we expect this from the next album? A collection of independently standing tracks, rather than a meticulously curated cohesive body of work?

W: That’s a great question. Working with Dan as I have over the years, I can tell you something that I believe is absolutely cast iron, never going to change and I’ll find out the following week that it’s been completely turned on its head. ‘survivin’’, that was done in lockdown so maybe that will inform the sound a little bit. Quite often, as with most things, we kind of meander through it, see what comes out. As happened with Bad Blood and Doom Days, on those albums, the title tracks were written and finished with about a day or so to go before the deadline. So everyone would think, being the title track, that was a sort of centrepiece. But it’s quite the opposite. We just kind of threw it together at the last minute.

C: With ‘survivin’’, it has an infectious groove. How has it affected you? It’s got to be different being on drums, being on percussion, with that.

W: It’s quite layered and programmed. Yeah, there are real drums underneath it but there are programmed bits as well. To be honest, to me it sounds a bit like a sort of James Brown loop- that’s kind of my bread and butter anyway. I grew up playing a lot of that sort of stuff. Normally with Bastille stuff, I’ll end up playing the drum part that I did in the studio, but then at the same time, we’ll end up programming stuff over the top of it as well. I essentially end up having to play two drum parts at once. To be honest ‘survivin’’ is one of the easiest tracks I play now, which is great.

C: It was originally about the ups and downs throughout Bastille’s career. But now with everything that’s going on and with the state of the world, it feels relevant to everyone, not just in the sense that it was intended.

W: It’s funny, isn’t it, how that panned out, but I guess also we try to never explicitly explain what every song is about. We try and leave it open to interpretation a little bit. And also, it’s interesting seeing different meanings that people find in songs. There’s one song which, I’m not going to name it, but everyone thinks it’s this real sort of, yearning love song but it’s really about someone getting drunk. It’s quite funny seeing how people take certain songs or find things that aren’t necessarily there.

C: Which would you rather own, the Delorean or the TARDIS?

W: Oh the Delorean. Absolutely, one hundred per cent. Because I’m a massive Back To The Future fan. I’d probably crash it and write it off in the first day, but it would be a hell of a day. I think with the TARDIS, there’s way more scope for ruining the fabric of space and time. With the Delorean, if it’s not a flat surface, you’re pretty f***ed.

Listen to Bastille’s latest singles ‘survivin” and ‘WHAT YOU GONNA DO??’ on all streaming platforms.