The information was requested by Dr JJ Hermes, a postgraduate fellow in the astronomy group of the physics department.

Sir Thrift’s spending on air fares last year was over twice the amount spent in 2011-12; he was reimbursed almost £26,000 for 17 international trips in 2012, a previous study by the Boar revealed. 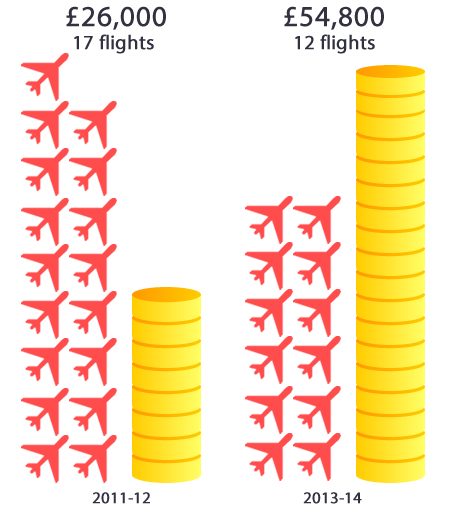 The number and cost of flights taken by Nigel Thrift. Photo: Ann Yip

According to the information given, Professor Thrift mainly flew via British Airways to a wide variety of destinations, including but not limited to: Melbourne, San Francisco, Mumbai, Mexico City, New York, Budapest and Rio de Janeiro.

He also flew Emirates twice and took Qantas whilst touring Australia and Indonesia. He took one flight with Ryanair while returning from Budapest.

The majority of flights cost over £2,000, with the most expensive single destination flight costing £6,126.25. Professor Thrift’s round trip within Australia and Indonesia cost a total of £8,208.

Dr Hermes said that he submitted the FOI request out of “sheer interest in starting a conversation about whether or not the vice-chancellor or other senior members of staff should be in the habit of flying business (or first) class while representing the University internationally.”

Dr Hermes added that information he was given is “likely [to] represent only a small part of Thrift’s total travel reimbursements, since he is entitled to a University-funded credit card for hotel bookings, meals, and other expenses incurred overseas.”

Nonetheless, he said he thought the airfare costs are “an exceptionally excessive spend.”

He commented: “I am not aware that the decision to allow such expensive travel, totalling £54,841.08 for the last academic year, was ever discussed let alone voted on by the Senate.”

Peter Dunn, head of press and policy at Warwick stated: “The flights reflect the specific commission he was given, as vice-chancellor, to raise our international profile.”

He added: “Also in that list of journeys are two that were taken to accompany government ministers promoting UK universities overseas. Each of those journeys in fact cost us less than just one of the lowest overseas fees we charge for a degree course.

“As our overseas student applications are up it is clear that the promotional activity we have undertaken such as this has greatly benefited the University, bringing in more funding to allow us to deliver even better teaching and research.”

Research conducted by UCU suggested that the average spend on flights for heads of 128 universities in the 2013/14 academic year was £9,705.75.

The study also revealed that the head of the London School of Economics (LSE) had the highest travel expenditure. Professor Craig Calhoun spent £59,811.14 on flights last year.