I’ve never been a massive fan of survival horror, a fact which began ringing in my head like an alarm bell as I queued to have a go on Alien: Isolation at this years EGX Rezzed. The eponymous villain of the Alien franchise has never really been a particularly friendly chap. It’s not as if he ever tried to offer Ripley a cup of Tetleys. He’s only on screen for about 3 minutes in the original Ridley Scott film, but I doubt he was spending the remainder of the time giving to UNICEF and helping old women across the street.

Matters weren’t helped as I listened to the game’s Lead Game Designer, Gary Napper, in a developer session as he explained the non-scripted, erratic nature of Isolation’s Alien: “When you learn the pattern of something, you get more information than he has…we never wanted that to occur, so we needed to build a systematic, non-scripted Alien”. Well that’s just dandy. Terrifying and completely unpredictable. I was beginning to wish that they’d use the rather camp alien from American Dad as source material (although admittedly that wouldn’t be so much terrifying as it would be utterly annoying). 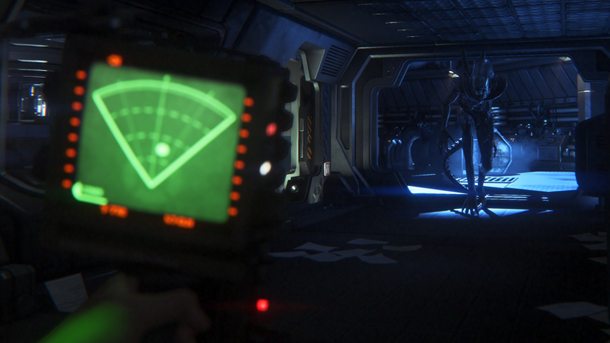 Despite my pathetic capacity for horror, I actually found my short time with Isolation not only enjoyable, but also one of the most authentic gaming experiences I’ve had in a long time. If there’s anything Creative Assembly wanted to stress about the game it’s that it’s the most faithful video game adaptation of 1979’s Alien yet, and from the claustrophobic spaceship environments that could have been plucked from the Nostromo, to the retro motion tracker held quiveringly by the player, there is never a dull moment in just looking around to see how well everything has been referenced, replicated and arranged. What’s more, the stylised VHS filter that hangs over it all is the nostalgic tip of the iceberg, giving a grainy, imperfect look which Lead UI Designer Jon Mckellan referenced quite well: “You spend a lot of time trying to work out a style and then look back at the footage and think ‘Wow, this looks awful. We’ve nailed it.'”

But its not just the 70s low-fi feel that Isolation aims to bring back. The feeling of dread, the feeling that there is something hunting you and there’s very little you can do about it, is there in a way that somehow manages to make Dead Space look like some kind of fun run. At least Isaac Clarke had some kind of weapon. All Amanda Ripley has is a small wrench, which I quickly found to be useless when confronted with a very scary, very pissed off Alien with unpredictable AI. 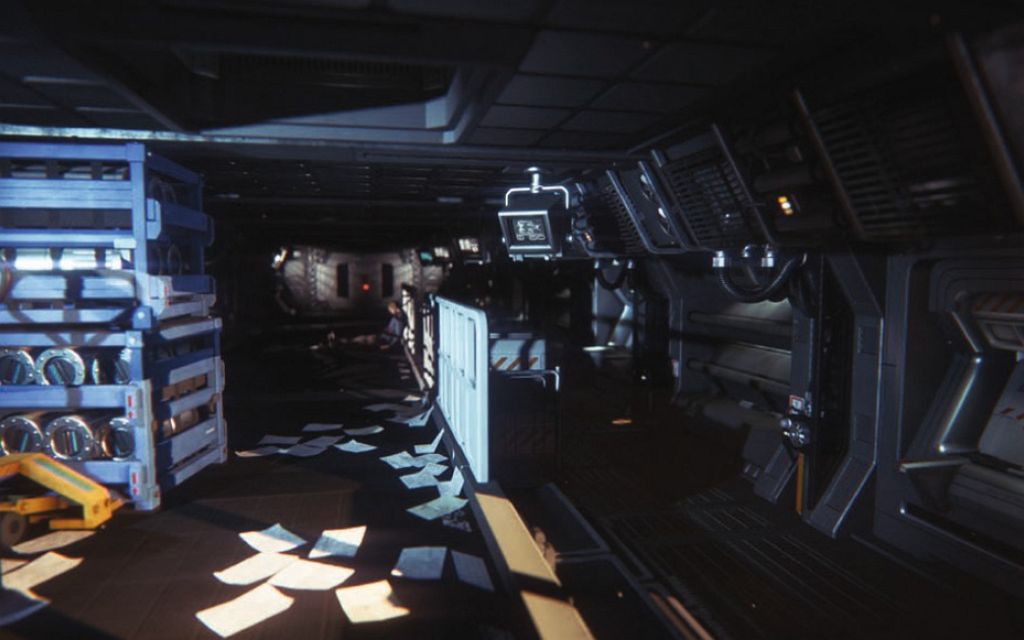 But it was ultimately this vulnerability which (like every horror game that I’ve eventually wimped out of) truly got my heart racing. Isolation goes one further than the rest, proving that you don’t need to have more than one enemy to end up completely beside yourself with fear. It’s just you, and something that wants to eat you, in a confined space, in space. A battle of wits, where the loser in one scenario definitely comes off a lot more dismembered.

The highlight of the demo I played came when, after an atmosphere building, alien-less traipse around the station, it coiled almost sadistically out of a vent in front of me, leading to a cat and mouse situation in which I had to reach an airlock without being seen. Hiding is not so much an aspect of Isolation as it is the main mechanic, and with the knowledge that every noise made can change the Alien’s course in a heartbeat, learning how to hide well is your only chance at survival. Keeping low is also advised, as your adversary’s size does mar its vision slightly. At one point I hid under a desk just before seeing its legs slowly skulking past, in a manner similar to when I used to hide from my Maths teacher at school. 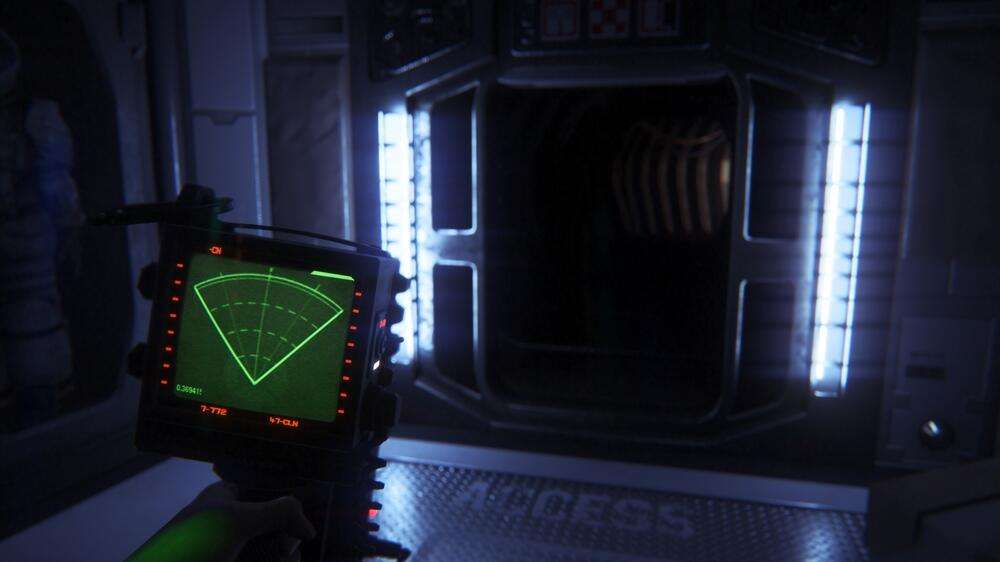 Your only defence: keeping an eye on the motion tracker is vital for survival

Aside from a flashlight that is often more conspicuous than it is useful, your motion tracker is your only friend, albeit an extremely useful one as it tells you when your big-headed buddy is behind and to the side of you, as well as in front. It did seem an odd decision to have no toggle option for it – I was unable to remove my finger from the right bumper for fear of missing the slightest movement – and the framerate seemed to dip a bit every time I pulled it back up to look for monsters, but these may just be problems with the game’s unfinished state. Even so, a pant-wettingly scary video game is probably worth the trial of having a marginally hurty finger. 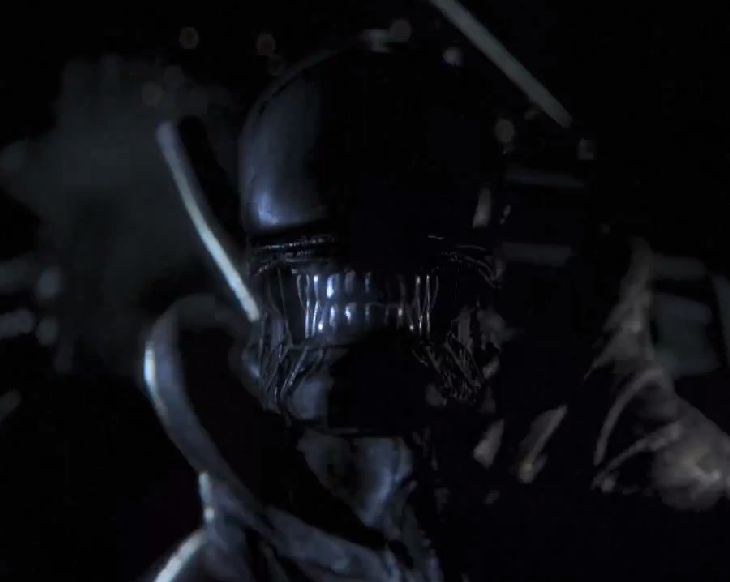 “Game over man, game over!” A sight you’ll dread seeing

A much greater deal breaker for some will be the difficulty, which, you might already have guessed, is on the unforgiving side of the spectrum. You’re facing an enemy who makes no compromise for human error, pouncing on you when it so much as glances in your direction and delivering what might be one of the most unnerving Game Over executions we’ll see this year. A lot of thought has been put in to making sure there are plenty of alternate routes, nooks and crannys to escape through, but when you are facing something so smart which punishes every minor mistake so heavily, it is rarely ever clear how safe you are, and how safe you are going to be in the next few nerve-racking moments.

Needless to say, by the end of the preview I was definitely worse for wear (there were six year old girls who would’ve fared better), but it does need saying that at no point had any of my deaths in the game been arrived at cheaply. At no point during play did I look around and see anything that would be out of place on Ridley Scott’s original film set, and at no point had the creepy atmosphere been anything less than stellar. Whether you are a fan of the source material, or just like the idea of being hopelessly, dangerously alone, then Alien: Isolation is definitely looking to be worth the wait.

Check out the trailer below, and if you are interested you can follow the further links to developer sessions with the senior development team at Creative Assembly. Alien: Isolation is scheduled to be released on October 7th 2014 on the following platforms: Xbox 360, Xbox One, PlayStation 3, PlayStation 4  and PC.[divider]

Will Alien: Isolation be the best Alien game yet? Tweet your opinion @BoarGames Game over man, game over