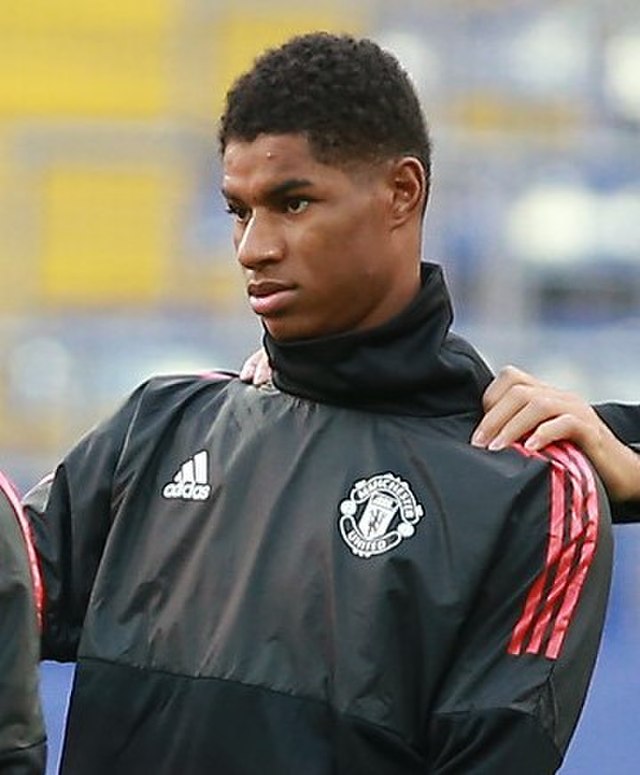 The story of Marcus Rashford

No footballer in recent memory has carried as much weight on their shoulders, both in football and outside of it, as England and Manchester United forward Marcus Rashford. Brought into the starting line-up at one of the world’s biggest football clubs, due to an injury crisis, aged 18, he immediately became a cult hero at Old Trafford with his spirit, determination, and incredible talent. Following in the footsteps of greats like David Beckham, Ryan Giggs and Paul Scholes would be difficult enough, but Marcus appeared at a time of crisis for the club, and immediately became a shining light in an otherwise dire period at Old Trafford.

It is now over seven years since his debut for the club, and Marcus has overcome injuries, drops in form and confidence, and not to mention the entire British government. How did a young lad from Manchester become a footballing and political icon, and can he finally return his boyhood club to the glory years of old?

Marcus Rashford made his debut in a Europa League group stage game in late 2015, replacing Antony Martial after a warm-up injury. The image of him scoring twice at the Stretford End and sprinting to the corner to embrace his friends, including a young Dean Henderson, is one seared into the minds of every Manchester United fan. Everyone from Nicky Butt to the first team manager, Louis van Gaal, heaped praise onto his young shoulders.

Despite the pressure, he continued his form and became a mainstay in the first team over the next few years. He would achieve his first handful of trophies under Jose Mourinho and Rashford continued to flourish, even when he was played out of position. When Mourinho was sacked in 2018 and Ole Gunnar Solskjær brought in, Rashford was able to play a in a less fixed position, which further allowed him to express himself and his ability.

During the early period of Solskjær’s reign, Rashford played arguably his best football for Manchester United. Rashford was an ‘agent of chaos’ when faced with a defender to take on, with the ball at his feet, using his ability, pace and power to take defenders out of the game. From the left-hand side of attack, Rashford often cut inside onto his favoured right foot, linking especially well with a reinvigorated Anthony Martial. The highlight of this period was a last-minute penalty in the Champions League against tournament favourites Paris Saint Germain, smashed past the experienced gloves of Gianluigi Buffon.

Near the end of 2020, Rashford suffered a shoulder injury and with the player already carrying a double stress fracture to his foot, the cracks began to show. Rashford’s playing style slowed, he became fearful to take on players, he was fatigued, and like so many unfortunate youngsters before him, it seemed his strength was fading. When players are pushed into professional football, playing 50 games a year at such a young, developmental age can cause issues further into a footballer’s career.

In April 2021 it was reported that Rashford had not played football pain free in two years, now also suffering from a back injury. Then the hardest night of Rashford’s career threatened to kill his career for good. He came on in the final minute of the Euro 2020 final at Wembley for England and missed a crucial penalty, as England lost on penalties to Italy. The decision by England manger Gareth Southgate to bring him on solely to take a penalty has been criticized since. Rashford, along with England teammates Jadon Sancho and Bukayo Saka, who also missed their penalties, were subject to disgusting racial abuse in the months following the match.

There is an air of excitement around Manchester United currently

After surgery at the start of the 2021-2022 season, Rashford struggled to return to his former self, not helped by a tumultuous time at Manchester United, with the departing Solskjær making way for Ralf Rangnick as interim coach. After his poor form, many Manchester United fans began to write him off, with some fans and pundits suggesting he should be sold.

Rashford’s salvation came under Erik ten Hag at the start of the current season. After a shaky start, the Dutchman’s fresh tactics have revitalised the entire team, with Rashford arguably benefitting the most. Rashford is currently Manchester United’s top goal scorer for the season, with him scoring in his last nine appearances at Old Trafford, equalling Manchester United’s all-time record for goals in consecutive home games. The confidence and ability on the ball we saw at a young age has returned. There is an air of excitement around Manchester United currently, amplified by their victory over current champions Manchester City last weekend.

The question is, can Marcus continue his current form? As United look likely to secure a top-four finish, as well as progressing in every cup competition, the fixture list is becoming more clogged than ever before. Maintaining his fitness will be a huge challenge, as Manchester United will need him to deliver in the big moments throughout the season. Whatever happens in the coming months, the determination that Marcus has shown to return to full fitness and form is to be praised. Seeing a full-strength Marcus Rashford walk onto a football match, the number 10 emblazoned on his back, and a team on his shoulders, is enough to strike fear into defenders once again.