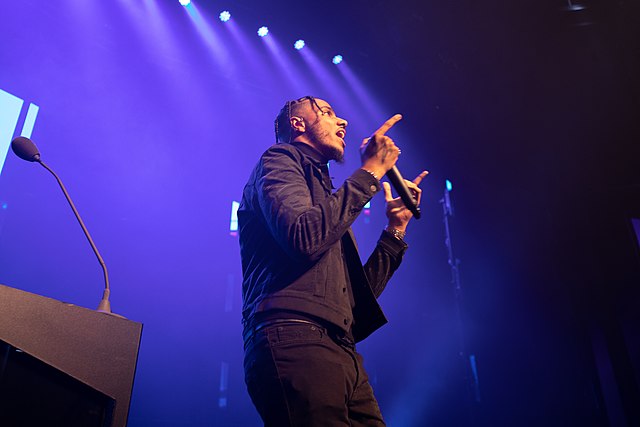 “Stay on the ball like Agüero”: Football references in UK grime music

Music, just as any other art form, reflects life. But one genre in particular has been prevalent in explicitly pointing towards inequality, police brutality, and popular culture. Just a brief look at the history of rap music from Wu-Tang Clan’s ‘C.R.E.A.M.,’ (an acronym for ‘Cash Rules Everything Around Me’) and the fight against racism and police brutality by N.W.A., to Eminem’s slander of celebrities in his 2000 song ‘My Name Is’, shows us important features of the rap genre. Name-dropping, in particular, has become essential in rap music – be it in the States, United Kingdom, or anywhere else in the world.

Britain has not fallen short of any of these things. UK grime, a genre that has evolved through the mixture of rap music, jungle, and dancehall, has very similar motifs – be it Stormzy’s hatred towards the UK’s ex-Prime Minister Boris Johnson in ‘Vossi Bop’, or Skepta’s urge to stop violence among the youth in ‘Blood, Sweat and Tears’. He asks: “What did Bob Marley sing for, what did Rosa Parks fight for, if we’re gonna kill each other anyway?”

For UK-based grime artists, finding a club means a sense of identity

In any sub-genre of rap, from the violent and aggressive drill, to the drug-infused, slowed-down cloud rap, there is a constant reference to popular culture – and one thing specifically comes up time and time again in British rap. Football. The English Premier League itself is of major cultural significance: in the 2020/21 season, the one affected by lockdowns, almost 27 million UK residents watched live Premier League coverage. In global terms, the Premier League reaches a potential TV audience of 4.7 billion people. The importance of football for grime music is threefold – it works on a cultural, geographical, and thematic level, as a metaphor of personal success.

Ask a football fan why they started supporting a club and wait for a long journey down memory lane: was it that they lived close to a particular stadium, their friends or parents influenced them, or was it the club their favourite footballer played for? For UK-based grime artists, finding a club means a sense of identity – and they are explicit in showing their support, and club affiliation. Music can put rappers in contact with their favourite players – as is the case with Capo Lee’s Chelsea FC remix of ‘Style and Swag’. There he raps: “Hudson’s out here, nutmeg, see you, Scorpion kick, could have been Giroud / Only London club with a champions league in the cabinet let me continue.” The music video was shot with Chelsea FC players Ruben Loftus-Cheek, Callum Hudson-Odoi, and N’Golo Kanté.

Rather than Capo Lee using these football references as metaphors of personal successes, the object of the track is purely an adoration of the club, which we can see in other examples as well. One being Discarda’s verse on Reece West’s track ‘Arsène Wenger’: “Arsène Wenger, three at the back / Yo, Lacazette, launch an attack.” As in the case of Capo Lee, the artist behind the lyrics is invisible, delivering lines of praise – in this case about ex-Arsenal coach Arsène Wenger and Arsenal’s forward Alexandre Lacazette. There are also ‘anthems’, such as The Squad’s track ‘Fearless’ which celebrates Leicester’s victory in the 2015/16 season. Supporting a club means being a part of something bigger – and through songs like this, artists can show their loyalty.

Rap music has always been about the individual. While artists like Capo Lee focus on praise for a particular club or player, AJ Tracey, known for many football-related songs, uses football as a metaphor of personal success. In ‘False 9’, he compares himself to a football position false nine – a centre forward that can continuously act as a midfielder and a striker. By that he shows that he can “play anywhere” and “shine”.

Another example is the song ‘Packs and Potions’ by HAZEY. The track blew up on TikTok and we can only ask why: was it due to the artist’s heavy scouse accent, the beat with bongo drums, or the constant wordplay around English football, mainly his favourite club Liverpool F.C. Football here also becomes a personal characteristic: “Ten toes, I done laps in the trench/And when they need more, I’m right back like I’m Trent.” The reason for mentioning English national Trent Alexander-Arnold is also a pun – the footballer plays a position of right-back for Liverpool.

Another aspect is the connection of football terminology and drill music. This sub-genre is thematically based around violence, murder, and drug dealing, thus Headie One’s line “excellent finish, Mo Salah” in ‘Know Better’ can be read in a different sense to just kicking balls in a net. In ‘Mourinho’, a track by drill artists POUNDZ and J.B2, the latter Dublin rapper states: “Tryna put the republic in check, so I stop shots like Peter,” using the reference of Czech goalkeeper Petr Cech to allude to J.B2’s control of the Republic of Ireland. Grime artist Skepta uses football terminology to describe loyalty to his friends in his song ‘English Breakfast’: “My men are united like Giggs, I will never leave my young gunners like Thierry.”

Football is not only a topic discussed in pubs or the sport section of your favourite newspaper. Grime and drill music use the sport to refer to personal characteristics or successes, making it relatable and interesting to its audience. Instagram accounts like @sportsmafiaboys show that there is a direct link between rap music, street fashion, and football. Now, in the aftermath of the 2022 World Cup, and with Premier League football underway, music can persuade people to start watching football even on a club level, and also to understand references to it in music.