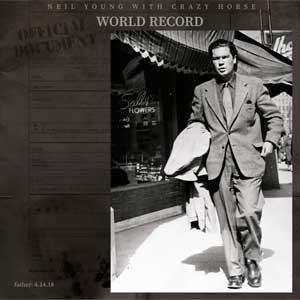 The 77-year-old country rock legend Neil Young collaborates again with American rock group Crazy Horse to produce World Record, an album overflowing with hope and despair for our planet Earth. At first, it follows a similar style to their last release, Barn, in 2021. It is detached from the simpler acoustic guitar and rustic voice Young became known for when his career began in 1969. World Record is an album of desperation containing more anger and experimentation with technology than his previous work. Young sings against how we treat our world, starting with the positive repetition of hope and ending in a position of complete desolation.

The album is full of great country blues and rock songs

World Record welcomes the listener with simple background noises, pulling you into the recording studio with Young and Crazy Horse. Then the first song plays – the hopeful and innocent single ‘Love Earth.’ Young’s simple blues tune and optimism are contagious, leaving you singing the chorus all day. The song is the perfect accompaniment to walking admiringly through nature. It is an expression of love for the past and the present. World Record continues by expressing the need to do more in future to prove we love Earth. The hopeful, innocent, major tone however, has sorrowful lyrical undertones, setting the stage for the album’s increasing bitterness.

The album is full of great country blues and rock songs. ‘The Wonder Won’t Wait’ has aggressive lyrics that perhaps come from Earth’s perspective daring humans to make the most of our time here, as Earth will outlast us. ‘The Long Day Before’ is a sweet waltz critiquing the lack of media attention on global issues. The hopeful tune ‘Walkin’ On the Road (To the Future)’ feels more like Young’s earlier work and features one of his iconic harmonica solos over a beautiful acoustic guitar line. ‘Overhead’ features harmonica too, but its dustier tones amplify the decaying world album backdrop. The listener is often immersed in the recording studio. ‘I Walk With You’ is a slow country rock tune inviting you to explore our dying world with Young, and ‘Break the Chain’ ends with studio chatter.

Some of Young’s higher notes don’t quite make it, like “war” in the chorus of ‘Walkin’ On The Road,’ but Young’s decaying voice on some songs builds the atmosphere of our crumbling world. This is also understandable given Young’s age and rarely hinders the album.

‘Chevrolet’ ends on an uncertain note, leading perfectly into a reprise of ‘This Old Planet’

‘Break the Chain’ is a more experimental blues-rock version of Fleetwood Mac’s more pop-rock song ‘The Chain.’ Despite their similar tones, Young’s bitterness and anger come through stronger throughout with more experimental guitar effects Young is not known for. ‘The World is in Trouble Now’ feels lighter than it ought to be, lacking slightly in the power it should contain. The almost jolly accordion synthesiser melody contrasts with the incoherent ominous background singing of “the world is in trouble now.” ‘Break the Chain’ is the stronger, more rageful song of the two that fits the mournful album better, carried by distorted guitar solos, and a sturdy beat.

The 15 minutes 15 seconds long ‘Chevrolet’ showcases the technological experimentation this album contains in one big song full of guitar discordance and distortion. A ‘Chevrolet’ is a car, and the powerful guitar riffs crying out drive the listener into believing something needs to be done to help our world before it is too late.

‘Chevrolet’ ends on an uncertain note, leading perfectly into a reprise of ‘This Old Planet’. This stripped-back piano and vocal line version is fully mournful of the completely broken world that now remains. The whispered solo vocals promise you’re not alone. This contrasts the earlier version’s bouncier, optimistic tone, and message of community in a beautiful world, highlighting how the ruined world we have created has no comfort for us. The broken song bleakly ends with about 25 seconds of fuzz, then nearly 10 seconds of silence before suddenly cutting off, leaving the listener in utter despair.

World Record records the damaged state of our world and the sarcastic achievement we should award ourselves for ruining it. It takes the listener on a journey promising hope but ends feeling abandoned after realising what we’ve done to Earth. Our efforts at the current rate seem bright, but at this rate, we will end lost in the depressed tone the album leaves us with. But Young reminds us from the start, it is not too late to make a change if we simply ‘Love Earth.’