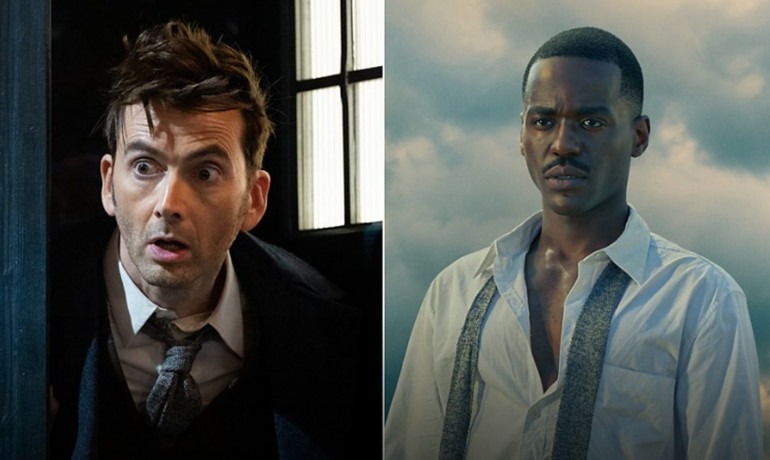 Doctor Who: The Power of the Doctor – A Final Chaotic Send-off to the Show’s Worst era

Despite featuring 8 Doctors, 9 companions, and 3 iconic villains, Jodie Whittaker’s last outing in the TARDIS ultimately attempted to spin too many plates. The episode’s flaws were endemic of scriptwriter Chris Chibnall’s time at the helm of the show – weak plots, wasted monsters with rushed crowd-pleasers which failed to appease viewers.

The finale began with a mini-episode of sorts which ends with Dan (John Bishop) deciding after a series of near-death experiences, that a crack in his helmet is a step too far, causing his show exit ten minutes into the episode. The rest of the plot involves the Master (Sacha Dhawan) with the Cybermen and the Daleks, switching between 1916 Russia and the present day, in an attempt to force the Doctor to regenerate into the Master.

The story is a complete mess. Dominic Maxwell stated: “The trailer-like pace and lurches of logic made it more Marvel comic than marvellous drama.” Marvel comics, that is, if they had the budget of a BBC show that’s been in decline for years – apparent in the vast and unconvincing use of CGI. The action is non-stop and largely non-sensical throughout, as companions magically escape with no explanation. As a result, it never feels like there are any stakes to the danger. Furthermore, insufficient time and care is given to the endless callbacks or goodbyes for them to really be appreciated, (it’s as though Chibnall was overwhelmed by everyone in the phonebook saying yes).

The use of the episodes monsters feels somewhat wasteful. While the Master is put to good use, the Time-Lord Cybermen act as henchmen, yet don’t feel all that scary. The Daleks feel as though they were chucked in for the sake of it; doing nothing besides standing by erupting volcanoes and looking despairingly as Sacha Dhawan takes a two-minute interlude dancing to ‘Ra Ra Rasputin’.

The show’s use of companions was a mixed bag. For hardcore fans of the show, the return of Tegan and Ace (Sophie Aldred) was a lap-of-honour bringing back popular faces, and giving them a chance to speak to their respective Doctors; Peter Davison and Sylvester McCoy, tastefully marking the BBC’s centenary. To anyone else, it was the return of two ageing companions no one asked for, who have nothing to do with Whittaker’s Doctor, and were intruding on what was meant to be her swansong.

The brief returns of Graham (Bradley Walsh) and Vinder (Jacob Anderson) from her time in the TARDIS felt more appropriate, albeit like so much of the episode, forcefully squeezed in. With this said, the companion group meeting at the end of the finale was a rare and touching masterstroke in the episode, featuring human time-travellers from almost every decade of the show’s nearly six-decade runtime, including original cast member Ian Chesterton (97-year-old William Russell).

In keeping with Jodie’s run, the regeneration sequence felt rushed and unsatisfactory. Chibnall failed to build any real sense of denouement as previous finales did so well – you feel so unprepared for Whittaker’s death. The convenience of the Master showing up at the end to hit the Doctor with a tractor beam felt like a second thought. Though the Doctor and Yaz’s goodbye is a poignant moment of frustration and reflection, it only hints at their will-they-won’t-they romance from the previous series, leaving this storyline unresolved. Whittaker is then left with only a few seconds staring out over Durdle Door to contemplate her death, leaving on the lame line: “Tag, you’re it.” As a result, you’re left with insufficient time to emotionally digest Whittaker’s departure before jumping out of your chair as David Tennant burns through to reprise the role.

As for the entirety of the 13th Doctor’s era, the performances are mostly fine but constrained by poor writing. Having seen Whittaker act phenomenally in Chibnall’s Broadchurch, it feels all the more disappointing to see her trapped by two emotions: 12-year-old buoyancy and forlorn dread. Mandip Gill delivers probably her best performance in her time on the show, remorsefully showing the potential for what could have been a good companion. Sacha Dhawan’s manic incarnation of the Master somehow fits the frenzied action of the episode, though his overacting is at times painful. The old Doctors (David Bradley as William Hartnell, Peter Davison, Colin Baker, Sylvester McCoy and Paul McGann) all play their roles with dignity, though the abrupt shapeshifting between them makes it hard to fully enjoy any of their individual returns.

The subpar quality of the finale and Chibnall’s time as a whole was reflected in the audience numbers. 3.7 million viewers seems impressive until you realise a special of the Antique’s Roadshow achieved 4.4m on the same day. David Tennant’s regeneration into Matt Smith on New Year’s Eve in 2009 received almost three times the viewers, with an average of 10.4m tuning in. The fact that the showrunners didn’t bother to give Whittaker a Christmas Special for a send-off is telling of the national ambivalence towards her exit.

The future is bright, however. The reappointment of Russell T. Davies as the show’s supremo and the exciting arrival of Ncuti Gatwa as the 15th Doctor should fill fans with hope. The return of fan-favourites David Tennant and Catherine Tate reprising their roles for three episodes in November 2023, should be a mouth-watering apology for the last few years of Who.