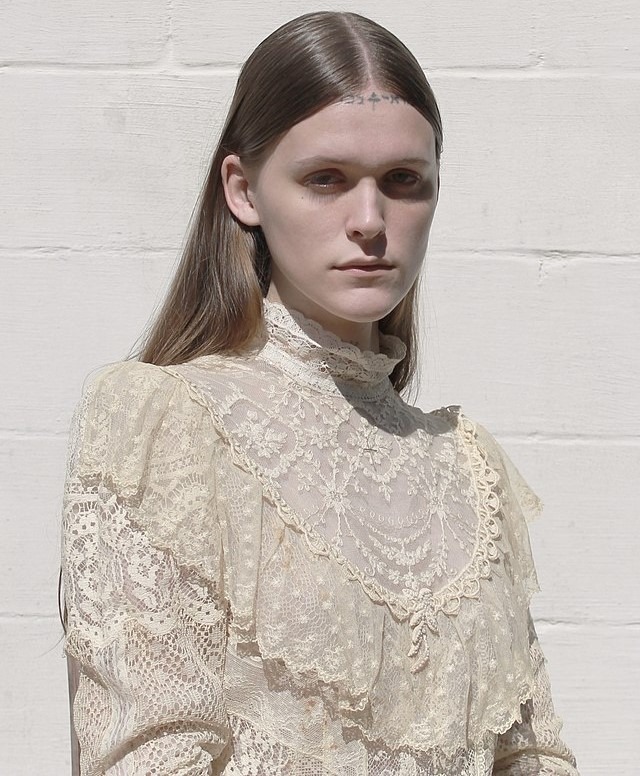 “It’s just not my year” sings Ethel Cain on ‘American Teenager’. Yet for Cain — real name Hayden Anhedönia — this is anything but the case. Having released her debut album to critical acclaim, modelled for the likes of Givenchy and opened for (and shared the stage with) her idol Florence Welch (Florence + The Machine), it’s undeniable that 2022 has been a breakout year for one of music’s most exciting talents.

Born and raised in Florida to a Southern Baptist background, influences of her upbringing are rampant in Cain’s music. Having left the church at the age of 16 before coming out as a transgender woman at 20, her relationship with (organised) religion is undoubtedly a complicated one. And it’s perhaps inevitable that this sense of religious trauma forms the baseline around which her output begins.

Ethel Cain is more than a stage name — she is the vessel through which Anhedönia creates. But where does Hayden Anhedönia end and Ethel Cain start? There’s no one clear answer to this. The two are intertwined, but at the same time are separate, with the topics of Cain’s songs frequently serving as a twisted — and often corrupted — version of Anhedönia’s own reality.

After adopting the Ethel Cain moniker in 2019, Anhedönia released three EPs across as many years (Carpet Bed, Golden Age and Inbred.) Reminiscent of a merge of cult-like chants and dream-pop drenched in reverb (Inbred is a noticeably darker project than its two predecessors), Cain takes on the image of all the darkest parts of the American South.

A standout is ‘Inbred’, the title track off her 2021 EP. Disturbingly sinister (“We wake up and all the f***ing lights are out”, “I’ll lay on the floor / touch me ‘til I vomit”) while building up to a rampant finale, it’s a stunning slowcore number that is sure to catch your attention.

While her EP content is strong, debut album Preacher’s Daughter takes her output to another level. A brilliantly sprawling concept album which is almost entirely solo-written and produced, Ethel Cain does not hold back in any sense across the album’s 75-minute run time — which averages out to over six minutes per vocal track.

Perhaps her most radio-friendly song to date, ‘American Teenager’ plays upon the same sense of doomed Americana evocative of Lana Del Rey’s Born To Die. Exclaiming lyrics such as “Jesus if you’re there / then why do I feel alone in this room with you?” and “The neighbour’s brother came home in a box / But he wanted to go, so maybe it was his fault”, Cain’s character expresses her disillusion with the traditional ideal of the American Dream — yet she has not fallen out of it yet.

‘Ptolemaea’ — a reference to Dante’s Inferno — is absolutely terrifying. Intense lyrical repetition throughout the grunge-infused song builds up towards a scream of agony in lieu of a bridge adding to its inescapable cult-like atmosphere. This is followed by a similarly intense snare drum sequence, representing the climax of a horror film. But although Preacher’s Daughter might set her up as a Final Girl, it deliberately falls short of the trope. Combined with ‘Thoroughfare’ and ‘Gibson Girl’, this delivers a horrifying yet jaw-dropping narrative juggernaut.

Unconcerned with brevity, Cain’s songs really shine in the seven-minute-plus range. This includes the Springsteen-esque road trip ‘Thoroughfare’ and the heartrending ‘Sun Bleached Flies’, with another song — yet to be formally announced — expected to be twenty minutes long.

One of the year’s best albums, Preacher’s Daughter draws influence from a range of genres which include alt-pop, gothic country and ambient blues. Cain lists the likes of Chelsea Wolfe and Florence + The Machine as inspirations, yet her music has a scope to it which is truly unique. With endless complexity in its compelling narratives, Cain’s ethereal soundscapes draw the listener in and keep them there.

And with the world of Preacher’s Daughter set to be developed further (b-sides, a book and a film are all planned), as well as two more upcoming albums in the same chronology, this is far from the last you’ve heard from her. There are more stories out there. And Ethel Cain wants to tell them to you.