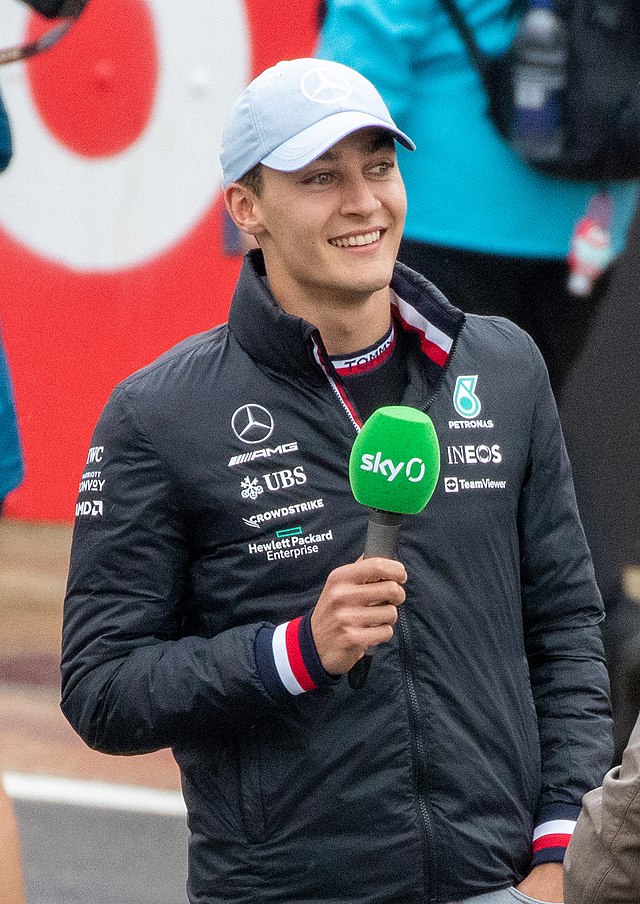 Russell’s maiden win, a Mercedes 1-2 and Magnussen on pole at the Brazilian Grand Prix!

In the penultimate race of the season, Mercedes finally got their first one-two, with George Russell securing his maiden win in F1! A Saturday sprint race added to the excitement of the weekend, prior to which Magnussen had claimed a shock first pole position.

Qualifying kicked off a day earlier than normal, with the sprint race on Saturday. Rain was predicted from the beginning of Q1, but didn’t fall until near the end of the second session, disadvantaging drivers who were yet to set a fastest lap.

In Q3, Russell took a spin off the track and got beached in the gravel with eight minutes left of the session. This brought out the red flag, during which the weather worsened, before qualifying was completed. Magnussen, who had set a great lap just before the red flags came out, therefore secured pole position! Verstappen lined up P2 and Russell P3 for the sprint race the next day.

Verstappen… struggled to maintain the pace needed to keep him competitive

On Saturday, Magnussen had a good start, staying ahead of Verstappen for the first couple of laps. The Alpine drivers made contact with each other on the first lap, during which Alonso’s front wing was damaged, forcing him into a pit stop, from which he emerged at the back of the pack.

At the front of the race, Magnussen held off Verstappen for as long as he could, but the Haas was no real challenge for the Red Bull car and by lap three, Magnussen had been overtaken. Then, on the next lap, Russell and Sainz also overtook Magnussen.

Stroll received a 10-second time penalty for an aggressive move that pushed Vettel onto the grass on lap nine. The yellow flags were then brought out on lap 13, as Albon spun off the track, failing to finish the race.

After a few laps of wheel-to-wheel racing, Russell finally managed to get ahead of Verstappen to take the lead of the sprint race. With Verstappen on the medium tyres and most other drivers on the softs, he struggled to maintain the pace needed to keep him competitive.

On lap 19, Sainz managed to overtake Verstappen, however slight contact was made, damaging Verstappen’s front wing, causing it to gradually peel off throughout the rest of the lap. Verstappen was then quickly overtaken by Hamilton, leaving him in P4.

Russell won the sprint race, putting him on pole for the main race on Sunday, followed by Sainz in P2 and Hamilton in P3. However, as Sainz had a five-place grid penalty, it became a front row lockout for Mercedes!

On Sunday, Russell had a good start, managing to stay ahead of Hamilton. However, not all the drivers had such a good first lap. Ricciardo and Magnussen made contact twice, leading to an early safety car and prematurely ending Ricciardo’s race.

At the safety car restart, Hamilton and Verstappen made contact. Verstappen was judged to have attempted an aggressive overtake, resulting in him receiving a five-second time penalty.

Leclerc and Norris then also made contact, in which Leclerc slid off the track and crashed into the barrier, but he managed to restart the car and carry on the race. Norris also gained a five-second penalty after the stewards decided he was at fault for the run in with Leclerc.

On lap 26, Verstappen served his time penalty, with a slow wheel change compounding his misery, leaving him down in P17, while Hamilton continued his fight back up the order. Perez and Hamilton went wheel to wheel racing for P2 on lap 45, a scrap from which Hamilton came out ahead, regaining Mercedes a 1-2.

Norris brought out the yellow flags and the virtual safety car on lap 52, after suffering electrical issues that caused him to stop by the side of the track. The marshals struggled to move the car away, forcing the full safety car to be deployed.

During the safety car, both Mercedes drivers were told they could race for P1 by the team. As Russell was going for his maiden win and Hamilton was seeking to uphold his record of winning a race in every season he has competed, both drivers were equally motivated to win.

On the contrary, both Alpine drivers were told not to race each other, an order Ocon tried to fight, as he was behind Alonso and wanting the chance to overtake. However, as the drivers have come together multiple times in the past, the team needed to make strategic decisions, to ensure they picked up the most points possible in their championship battle with McLaren.

This decision left Perez frustrated, having followed numerous team orders throughout the season to benefit Verstappen

On Lap 59 the safety car came in, with the top-five order: Russell, Hamilton, Perez, Sainz then Leclerc. Four laps later, Sainz overtook Perez to put himself up into a podium place. Leclerc quickly followed in overtaking Perez, who was struggling on the medium tyres.

Alonso was next to make an overtake on Perez, putting him down into P6 and only one place in front of his teammate, Verstappen. On lap 67, Red Bull made the decision to swap the drivers, in the hopes that Verstappen would storm up the field and take points off Leclerc. Verstappen was instructed by his engineer that, if the last lap came and he had not made any overtakes, he should swap back with Perez.

However, when the last lap came, Verstappen had not moved up the order, but still refused to let Perez ahead. This prevented Perez from gaining important points, which he needs for his driver championship battle with Leclerc. This decision left Perez frustrated, having followed numerous team orders throughout the season to benefit Verstappen.

Russell, having won the sprint race the day before, and leading the majority of Sunday’s race, fully deserved his first ever win in F1, and with Hamilton coming P2, Mercedes had a successful day, securing their first 1-2 finish of the season!

Next weekend, Abu Dhabi holds the final race of the season, at the Yas Marina Circuit, where the drivers’ and constructors’ championship placings will finally be decided! Although Verstappen has already won the drivers’ championship, the other positions are all to play for, which should make for an exciting climax to the 2022 season!