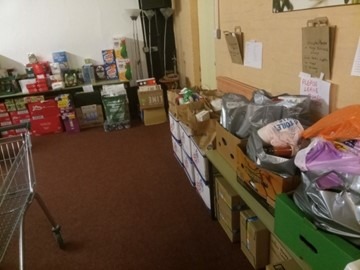 ‘Donations have really dropped’: Coventry foodbank appeals to the public

A Coventry foodbank has warned that its stocks are running low.

Cheylesmore Food Hub, which has teamed up with Coventry City Council to help distribute food, raised concerns that the cost of living crisis is starting to impact donations.

“Donations have really, really dropped, and we know things are going to get tougher for everyone”, Cheylesmore’s founder, Caroline Sinclair, said.

“We want to make it really easy to donate”, she continued, referencing the recent doorstep donation scheme, where residents from Cheylesmore, Earlson, and Whitley were invited to leave donations outside their homes.

Sinclair also said that the energy crisis is making it harder for people to use ovens to prepare food. “Normally with people I see their eyes light up, as there’s a good selection of stuff in there.”

“[But] one man picked up a pizza and just looked at me, as if I had really insulted him, and he explained he doesn’t have an oven.”

“People can’t afford to put their oven on, so we’ve tried to keep a really good supply of stuff like instant noodles, instant pasta, and instant mash that you can just make with boiled water, just so people have something to keep them going throughout the day.”

A recent NUS survey found that more than one in 10 students are using food banks because they cannot make ends meet.

Warwick students struggling with the cost of living can contact the SU advice centre, who can issue students with food bank vouchers, and in addition the University can provide a hardship fund in certain circumstances.