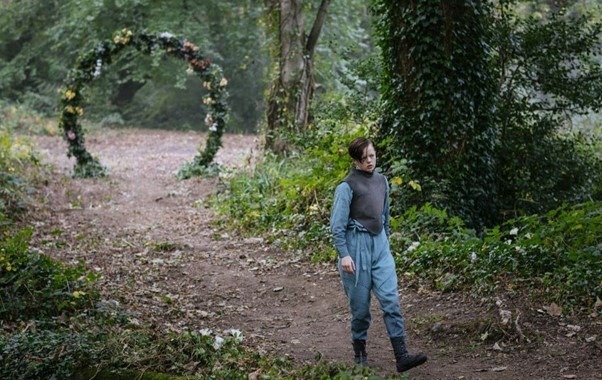 I had the honour of sitting down with actor Robyn Holdaway, best known for their work in Sex Education and Moonhaven, to discuss theatre, television, and what it means to be queer and non-binary within the arts.

“We need more shows where being trans or non-binary just isn’t really ‘a thing’.” Robyn has been part of a sci-fi show called Moonhaven where their character is non-binary, yet it’s never mentioned. “When gender and transition aren’t the focus of our character, that is when you get the best narratives!”

Robyn first got into acting when their parents put them and their brother into a youth theatre at 4 years old. Ran by a woman called Beth Wood, who continues to do great work with young people who have neurodivergent and accessibility needs and want to pursue the arts. Going to the BRIT school (a British performing arts school based in London) for musical theatre, Robyn realised this is what they were meant to do. “Acting has always held a place in my heart. You’re able to put words to things that are almost beyond language. It’s all a tool to convey the story.”

“When I started, I was looking at roles such as a token lesbian like Enid from Legally Blonde” – Robyn Holdaway

However, upon graduating from the BRIT school in 2011, Robyn shared that they felt there wasn’t really a place for people like them in musical theatre. “It’s not very accessible for trans and non-binary people.” Having a tenor to an alto range, Robyn realised they were at a disadvantage as most of the songs in musical theatre were for a higher belt. This didn’t stop them, however, from pursuing their goals in an industry they love. After taking a few gap years, learning Kung Fu in China and trekking around the Himalayas, Robyn joined GSA and has been working professionally ever since.

Musical theatre is a changing industry. Harrison Knights, who has created the True Voice Company, is striving to work with casting professionals to get more trans people into trans roles. “When I started, I was looking at roles such as a token lesbian like Enid from Legally Blonde, but there is more coming – PROM, Fun House. People are becoming more open to what it might mean, but it’s definitely still baby steps.”

“If it isn’t imperative to the plot, do sex and gender really matter?” – Robyn Holdaway

Compared to straight acting, one of the major issues with musical theatre is the singing aspect. With vocals, people need to fit within the vocal range to sing certain roles – with acting that issue just doesn’t exist. “When I graduated from GSA in 2016, it was a different industry where no one even knew the words non-binary.” Robyn always knew who they were, their drama school audition speech being all about gender and identity. Slowly but surely there has been a bigger spotlight on transgender identities and the concept of being non-binary. “I get in certain rooms because I am non-binary. Casting agents might be looking for non-binary actors, so I am more likely to be seen than a cis person, but there might only be 3 non-binary roles for every 100 cis female ones and there are a lot less non-binary actors.”

“We haven’t even achieved male and female 50/50 in roles, let alone trying to introduce trans and non-binary roles” – Robyn Holdaway

As well as getting more queer people into the acting industry, there also needs to be a push into the world of producing and casting in order to give accurate but also varied narratives to LGBT+ individuals. In many queer plots within TV shows, the characters are one-dimensional and all about their gender. “If it isn’t imperative to the plot, do sex and gender really matter?” Robyn expressed to me the importance of showing trans people as being imperfect humans too. “You can’t put them on pedestals, and you can’t demonise them. Trans people are people! These characters are the same as cis, or straight characters.”

Representation matters, but as we see with Robyn’s role in Moonhaven, we can cast people with different gender identities without it being pivotal to mention in all the acting roles they’re a part of. “We haven’t even achieved male and female 50/50 in roles, let alone trying to introduce trans and non-binary roles. So why not remove the need for this label in the casting process?”

When auditioning originally for the role of Cal, Sex Education advertised specifically for a non-binary actor to play the role. Unfortunately, Robyn was rejected for the role of Cal. “I was heartbroken because I was desperate to be on this show and thought they’d never have two of us.” This was the story they wanted to tell as a young non-binary AFAB person. The role of Cal being described as a skateboarding rebel with a romantic plot – Robyn wanted to do it justice. Despite original disappointment, Robyn was later asked to tape for Layla and ended up with a role on the show where they could deliver an accurate portrayal of a non-binary person figuring out their identity.

Robyn’s favourite memory of being on Sex Education was filming the binder scene for Layla. “It was a beautiful moment of trans joy. It was me, Due (who plays Cal), a trans-consultant and the director. We all knew the importance of what we were doing and I think that comes out in the edit. You can see this real, genuine connection from a community of people who you don’t often see connect; so that was a real honour to be a part of and film.” At the time, Robyn was still on their gender journey but shared how they were able to have the distance to separate from the character in some instances which allowed them to play the role authentically without presenting their trauma on screen. “I was lucky that my first binder experience was with my now wife when I was 16/17, and that is a very joyous moment for me.”

“Something I feel really strongly about is making sure young trans and non-binary people who are cast in shows which have these storylines receive the appropriate mental and physical support. For teenagers who are trans and non-binary, they are in the middle of this massive journey. It’s irresponsible filmmaking to cast young people and make them portray the trauma they may currently be living without then giving them proper support and guidance.”

There is still a long way to go in terms of representation in the industry. Queer people as a whole aren’t really in the writer’s rooms, they aren’t producing, and they aren’t casting. “You might get a character who is written to be non-binary, but in the same way that you can tell when a man has written a female character, you can tell when it is someone non-queer writing these roles. The focus is still on transition, still on medical, still on trauma. We don’t see a lot of trans joy. Our stories are worth telling.”