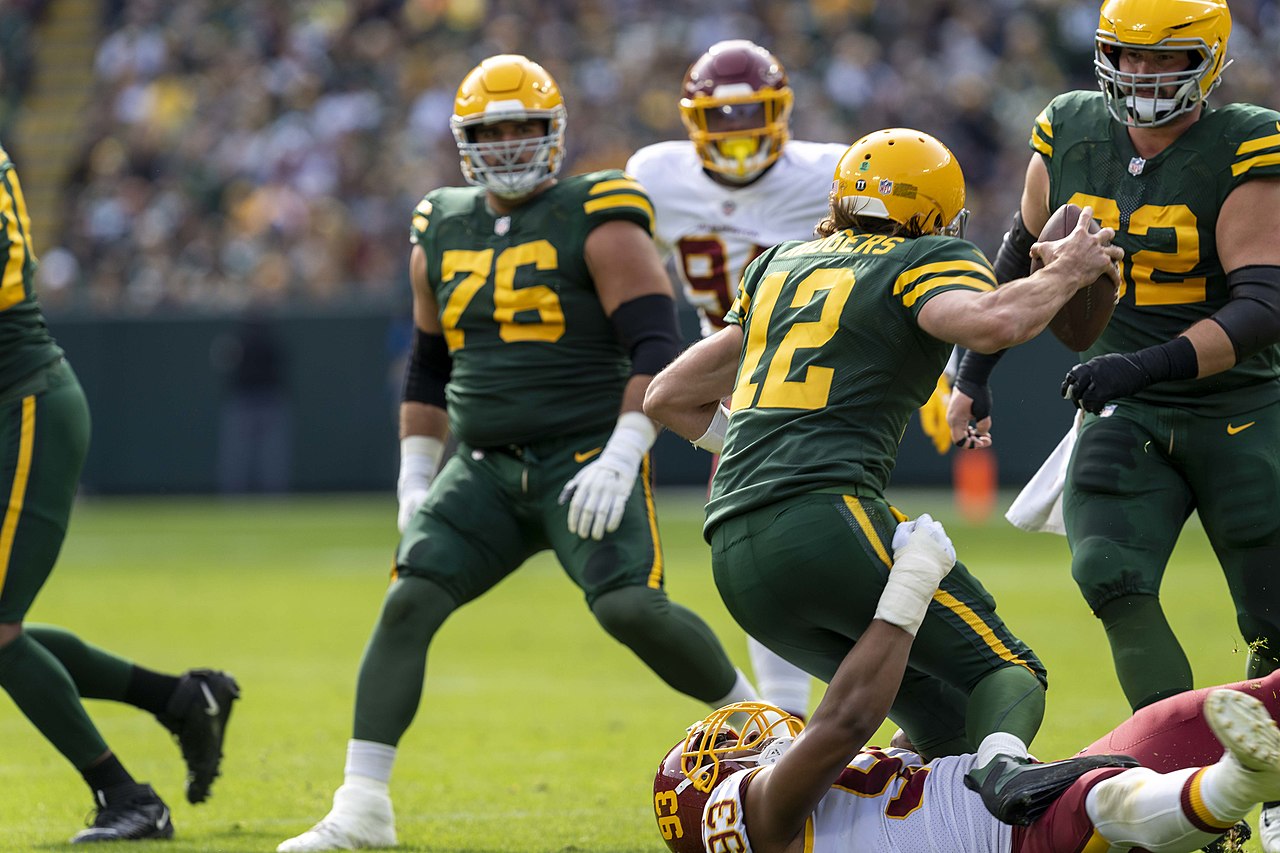 NFL Week 2: Frustration and delight as Tua and Trevor turn good while Lattimore and Evans ejected

A hectic week one continued into the second as the surprises continued. Tom Brady and Aaron Rodgers edged past their rivals while the Dolphins and Jaguars blew away people’s expectations of them.

“We were executing on all cylinders”: Dolphins 42-38 Ravens
A career best and defining game from Tua Tagovailoa carried the dolphins to a hugely impressive performance against the Ravens. Lamar Jackson performed well for the Ravens with the quarterback covering more than 100 yards and getting three TDs.

This meant that, by the halfway stage, the game appeared to be another Miami performance that would leave a lot to be desired. However, as the game continued Tua showed the ability that many believed that he had always shown the potential of reaching as the Dolphins stormed back to a victory.

In week one, the Dolphins had lacked some chemistry and it seemed to have been discovered here as Tyreek Hill, Jaylen Waddle and Mike Gesicki all put in incredible performances. Tua has been critiqued in the past, but his haters were silenced as he kept finding his new receiving duo and his always consistent tight end.

This performance against extremely strong opposition is one of many good performances Miami have had in recent years, but how far the Florida outfit can go is all dependant on how consistent they’ll be. This question around consistency could be solved if Tua, Tyreek and Jaylen keep up these performances, and Miami could be a dark horse going forward.

“There were some opportunities for more points out there”: Packers 27-10 Bears
It was a tough game one for the packers, their star quarterback Aaron Rodgers looked frustrated at times, and many believed he had already lost faith in his young rookies. This meant that going into a heated encounter with the Chicago Bears, many Packers fans indicated that they may have some fear. These concerns were short-lived.

The Packers star quarterback has amassed a 24-5 record against the Bears and, after completing 19 of 25 passes and 234 yards, this streak was only ever going to continue. Although much of the plaudits will head to Packers’ famous number 12, Aaron Jones’s performance cannot be overlooked.

Scoring two touchdowns will add a lot of confidence to the Packers offence and after running 132 yards many believe the Packers offense may go through him going forward. Another element of the Green Bay team that stepped up after a tough defeat was the defence as it looked a completely different side against the Bears.

The Chicago offense failed to ever really click into gear as players such as Preston Smith and Jarran Reed made crucial interceptions to prevent the game being a close competition. Both sides look improved from their first-week performance, but both teams will admit they’ve got a long way to go.

“I think there are points where you can become too overly emotional”: Bucs 20-10 Saints
Another heated rivalry occurred when the Saints faced the Buccaneers. Tom Brady threw his tablet on the ground in frustration while both Marshon Lattimore and Mike Evans were ejected for fighting. The latter will be suspended for the game against the Packers.

After the fight the Bucs ran to victory, Jamel Dean’s interception got the ball back to Brady who threw a deep throw to Breshad Perriman who got the defining touchdown of the game. It was another low-scoring game for the Bucs who seemed disjointed for the majority of the encounter. Brady failed to hit a lot of early targets and was visibly frustrated.

However, the GOAT managed to continue to win as per usual and this was greatly aided by the Saints offence being equally ineffective. Consistent major errors cost the Saints this rivalry victory and Winston seemed constantly to be struggling under pressure. While this gritty rivalry game may have been close, if they continue these errors, it may not be so tight if they face a stronger team.

Colts fall flat as Jaguars run rampant. Jaguars 24-0 Colts
It has been a rough few years for Jaguars fans, close to having one of the longest ever losing streaks in NFL history last season. They needed hope and their performance on Sunday may have given it.

Many within the Jacksonville club pinned all their hopes on Trevor Lawrence when he was drafted first in 2021 and the quarterback had a shining moment in his 19th career start. The Colts looked flat both offensively and defensively as the 22-year-old connected with seven receivers for 235 yards. While Matt Ryan struggled immensely, Trevor was 25 for 30 as the game to a close.

The veteran saw his offense go for just 71 yards in the first half and will be seriously concerned if the perennial losers of the league have just dominated them as they did on Sunday. Meanwhile in Florida hope may be just around the corner as Doug Pederson already looks like an excellent appointment.

The Jaguars performance stood out in a league full of close encounters as both the Arizona Cardinals and New York Jets relied on late comebacks to win. The Jets look a very different side this season and Joe Flacco threw four touchdown passes as the side from NYC won 31-30 against Cleveland. Their New York neighbours also look rejuvenated this campaign and they edged Panthers 19-16. Close games occurred around the league with the Cowboys, Rams and Patriots all winning by four or less.

Elsewhere in the league the Broncos, 49ers and Lions didn’t have these scares as they all eased to victory. Detroit looks like a team that may not be the laughing stock of the NFL as Jared Goff threw four touchdown passes, with the 49ers’ Jimmy Garoppolo having an equally successful outing.

The NFL season has undoubtedly started with a bang and while some teams struggle to get their seasons moving, others have already demonstrated that people’s preseason expectations of them were inaccurate. As the Buccaneers welcome the Packers next week, the excitement of the NFL will definitely continue going forward as teams continue battling towards Arizona.