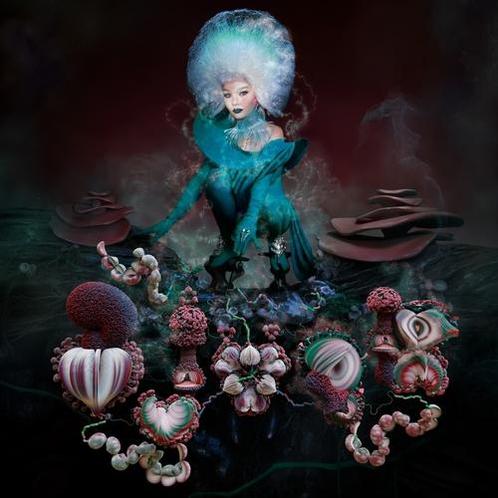 Five years can be an eternity in music. And for Björk, releasing her first album since 2017’s Utopia, this is no different. Having migrated back to her native Iceland, experienced the death of her mother, and lived through the pandemic, there is much to discuss on Fossora, her tenth studio album.

Never one to rest on her laurels, the latest stage of Björk’s sonic evolution brought about numerous other changes. Gone is Arca, the figure so present on Vulnicura (2015) and Utopia (2017) — the Icelandic auteur resuming her previous sole-producer duties throughout much of the album. The atmospheric ideal of Utopia is replaced with what Björk calls her ‘mushroom album.’ And while this motif is certainly present throughout, the album’s subject matter equally dedicates itself to relationships and the idea of renewal.

A highlight is the stretch dedicated towards Björk’s late mother, Hildur

Fossora — a made-up word derived from the Latin for ‘digger’ — is precisely what Björk wants the listener to be. Becoming fossora, per se, takes the listener past the surface-level fungal analogy, towards its other themes. This idea is especially present on the title track, with indicative lyrics such as “Her fossorial claw digs downwards / Dissolves old pain” and “Even though the ground is burnt / Underneath monumental growth.”

“Are these not just excuses to not connect?” she sings on the first line of the lead single and opening track ‘Atopos’. Led by a thumping drum beat with elements of bass and clarinet, ‘Atopos’ is fascinating in its directness. Her message of resilience is loud (“Our differences are irrelevant / To insist on absolute justice at all times / It blocks connection”) and rings strongly throughout as it introduces Fossora’s key themes.

A highlight is the stretch dedicated towards Björk’s late mother, Hildur. Written in the weeks before her death, the mourning choir-esque layered vocals of ‘Sorrowful Soil’ allow Björk to come to terms with the inevitable. The track’s closing, repetitive wails of “you did well” add a tranquil touch.

Björk is a grizzled veteran in the musical landscape, but her voice shows no signs of strain

In accompaniment is ‘Ancestress’, featuring an appearance from Björk’s son, Sindri. Perhaps one of the most eloquent songs of her entire discography, ‘Ancestress’ is an interesting contrast with the similarly titled yet utterly nonsensical ‘Ancestors’ (Medúlla, 2004). “My ancestress’ clock is ticking”, she sings. Not enough just to say so, the song’s progression is marked with both gongs and the ticking of the second hand. Filled with gravitas, it is impossible not to be entranced by this seven-minute tribute.

Album closer ‘Her Mother’s House’ serves as a sort of B-side to ‘Ancestress’ in more ways than one. This track sees Björk going through another motherly loss, reflecting on her daughter, Ísadóra (who features on the track) moving out as she reaches her own adulthood. “The more I love you / The stronger you become / The less you need me” provides a sombre yet not sad finale. It’s a suitably poignant duet.

At the age of 56, Björk is a grizzled veteran in the musical landscape, but her voice shows no signs of strain. In fact, she doesn’t hesitate to borrow elements of her most daring vocal album, Medúlla, such as observed in the likes of ‘Sorrowful Soil’ and ‘Mycelia’.

While there’s undoubtedly a method to Björk’s madness, this does result in an album structure which seems somewhat clumsily assembled. The disruptive nature of many of the individual tracks results in a listening experience that feels too stop-start at times. One has to wonder whether a more singular thematic focus could’ve resulted in a more polished product.

Fossora sits in an interesting spot in Björk’s discography. It’s more digestible than Vulnicura yet not as approachable as Post. Yet it seems to draw on the best parts of many of its predecessors — whether that’s the flutes that clearly define Utopia or the intricate a capella of Medúlla. Never one to pigeonhole herself, there’s no singular sound to Fossora. ‘Unconventional’ is the name of her game — manifesting itself in forms such as the irregular time signatures of ‘Ovule’, the eeriness of ‘Victimhood’ and the chaotic techno sounds of ‘Trölla-Gabba’.

One might be forgiven for thinking that Björk’s best days are long behind her. And from a commercial viewpoint, maybe that’s true. Crucially though, she doesn’t care. As demonstrated by the eccentric video released for ‘Atopos’, she’s having a great time in her mushroom world. And having made what’s perhaps her best and most interesting album since Vespertine (2001), I think that Björk is perfectly fine just where she is.

“As a singer-songwriter, my role is to express the journey of my body or my soul. Hopefully, I’ll do that till I’m 85,” she said in one of the first interviews for the record. Fossora proves that Björk has no plans to slow down anytime soon. And I, for one, will be listening.