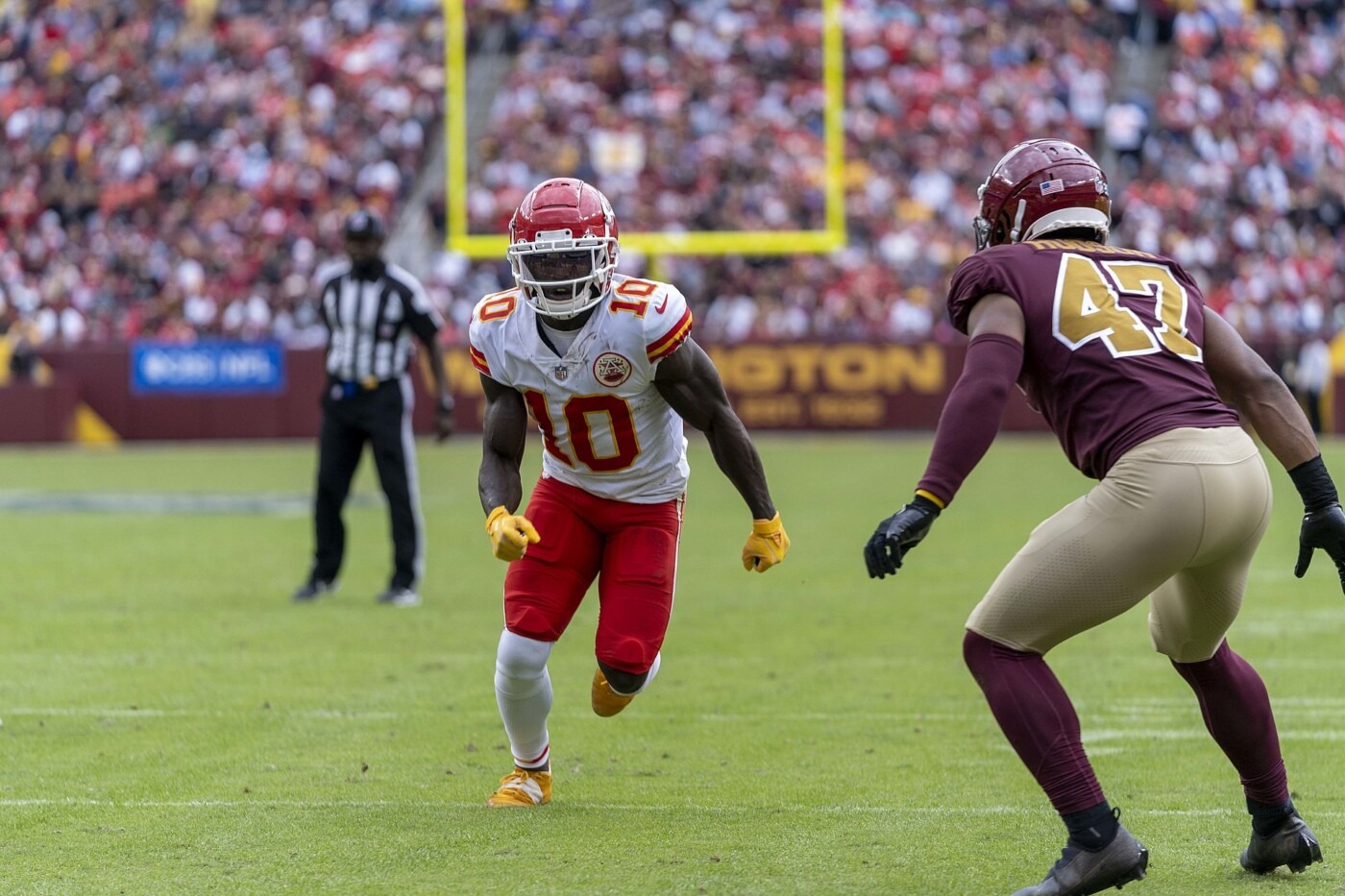 NFL Returns: What we learnt from Gameweek One

9 September brought about the long-awaited return of the NFL for the 2022/23 season. With shocks and surprises galore, many teams will have learnt lessons for how their seasons could potentially turn out.

“They beat us in every way”: Chiefs 44-21 Cardinals
The Chiefs returned to the league for their first time since their close defeat to the Bengals in the AFC Championship, and although they had lost one of their best performers from that game in the form of Wide Receiver Tyreek Hill against Arizona, it appeared to be a situation of no Hill no problem. Mahomes returned to form and diced the Cardinals defence apart. He completed almost 77% of his throws and with Travis Kelce on form alongside strong performances from both Juju Smith-Schuster and Marquez Valdes-Scantling the Kansas City offense looked back to its explosive self. A five-touchdown battering of the Cardinals demonstrated to Mahomes’ former coach Kliff Kingsbury that the student was now the master. On the other side, their defence also managed to put a stop to most of the Cardinals’ plays and Kyler Murray struggled to prove that the Card’s late season collapse last season wouldn’t continue into the new season. Kansas’ rookie defenders seemed more than capable of the step up leading to Murray being constantly hounded and rookies like George Karlaftis stealing the show, and the win for Kansas.

After the game Kingsbury admitted: “There’s no denying it, no hiding from it. We didn’t execute any phase and they played at a high level.” His former player simply exclaimed that they “put on a show”.

“There’s a lot to clean up all the way around”: Vikings 23-7 Packers
It was a tough watch for Packers fans as Aaron Rogers became increasingly frustrated throughout their huge defeat to the Vikings. An early mistake by Christian Watson seemed to lead to the Packers QB losing all faith in this rookie option and the Packers offense suffered as a result. While their former superstar Devante Adams was busy catching 10 passes for 141 yards for the Raiders, the Packers’ wide receivers only managed to muster 12 passes for 120 yards. This hole meant that it was a very different Packers’ offense then we’ve seen in the last few seasons. This was compounded by the Vikings’ defence, former-Packer Za’Darius Smith managed to put in a great performance against his former team and set the pace for a strong defensive performance. The Packers defence was lacking in comparison and Justin Jefferson sent a message to the league with a standout performance. Lighting up the field Jefferson had 184 yards and two touchdowns, and it could have been more. The Packers are going to have to make some serious changes if they want to continue their lofty aspirations.

“Poise, composure, play-making, leadership”: Justin Herbert and Charges edge Raiders in 24-19 victory
As the Packers were mourning the loss of Devante Adams, he was putting in an excellent performance against the Los Angeles Chargers. However, his new connection with Derek Carr was not enough to guarantee victory. The due from Fresno State linked up extremely effectively and was almost enough to lead the Raiders to victory, but other elements of the Raids offense faltered, meaning that the Raiders often appeared lobsided going forward. Again this was compounded by a new-look Charges defence with big names like Khalil Mack and J.C Jackson added over the summer, the new defensive unit that the charges have assembled looks like a much more competent unit. This is also true for their attacking threats and unsurprisingly Justin Herbert continued his great form from last season into the game leading to 279 yards, three touchdowns and the all-important victory. It was a great day for the quarterback and his performance really seemed like the difference in such a close encounter.

Burrows struggles against Steelers: Steelers 23-20 Bengals
Another young quarterback in the form of Bengals’ Joe Burrows had a different fortune as his Bengals teams struggled to breakdown the defence of the Pittsburgh Steelers. In a game that could have easily gone either way, the errors that the young quarterback turned out be to be costly as he threw four interceptions and directly led to five turnovers. The Steelers’ defence was vigilant in their defence and three sacks from Alex Highsmith helped them contain one of last season’s best offenses. The game wasn’t stress free for the Steelers, though, as superstar T.J Watt is rumoured to be missing multiple games after tearing a muscle during the game. This alongside an injury to Najee Harris could be worrisome for Steelers fans.

Patriots dominated by Dolphins: Dolphins 20-7 Patriots
Another team with fears about their attacking efficiency will be the Patriots. The Dolphins put a mixed 2021/22 season behind them as they stormed to a 20-7 victory over Bill Belichick. Tua Tagovailoa has pressure on him to impress this season and with new attacking threats in the form of Tyreek Hill he started to deliver, remaining the only undefeated quarterback against Belichicks’ Patriots after four games. While very different to his relationship with Mahomes, Hill played well but it may take a while for fans at the Hard Rock Café stadium to witness the connection that occurred in Kansas. Although Joe Burrow struggled against the defence of the Steelers, it seems unlikely that this could occur against the Patriots, as even with Tua and Hill struggling for chemistry, the Patriots struggled on both ends of the field. In a post-Tom Brady world, it seems the Patriots’ struggles could just become worse and worse. Meanwhile, the Dolphins seem to have a bright future under new coach Mike McDaniel.

Superbowl Champions Humbled: Rams 10-31 Bills
It was a snap back to reality for the Los Angeles Rams as they got dominated by the Bills. Rams coach Sean McVay will enter the second game of the season as a .500 team for the first time as coach. Matt Stafford being sacked seven times did not help their case as the Rams struggled to regain the form that brought them to the title last season. Before the game the Rams unveiled their Super Bowl banner but this didn’t appear to be the same team as they were overwhelmed by the Bills. Josh Allen goes into the season as a clear MVP contender and dominating the current champions puts the Bills in good stead if they can maintain these performance levels.

Record Breaking Brady the difference in defensive game: Buccaneers 19-3 Cowboys
In Sunday’s game Tom Brady started what many expect to be his last NFL season with a solid victory over the Dallas Cowboys. The Cowboys will also now be without their main man Dak Prescott as he is out with a thumb injury. A game with two of the sports top offenses ended up a close defensive game with Brady throwing the only touchdown of the game amongst his 212 yards. The only 45-year-old starting quarterback in NFL history, Brady looked sharp and his connection with Leonard Fournette could see the icon of the game go late into the post season again under new coach Todd Bowles.

There were also wins for the Commanders, Ravens, Eagles and Bears while the Colts and Texans drew 20-20. There was also a close game in Cleveland wherein rookie Cade York converted an almost 60-yard kick to beat the Panthers and secure the Browns’ first win on the road in a season opener for 28 years.

While there are definitely going to be some twists and turns before we get to Superbowl LVII, many teams may already need to make some serious alterations if they want to keep their hopes of getting to Arizona alive.