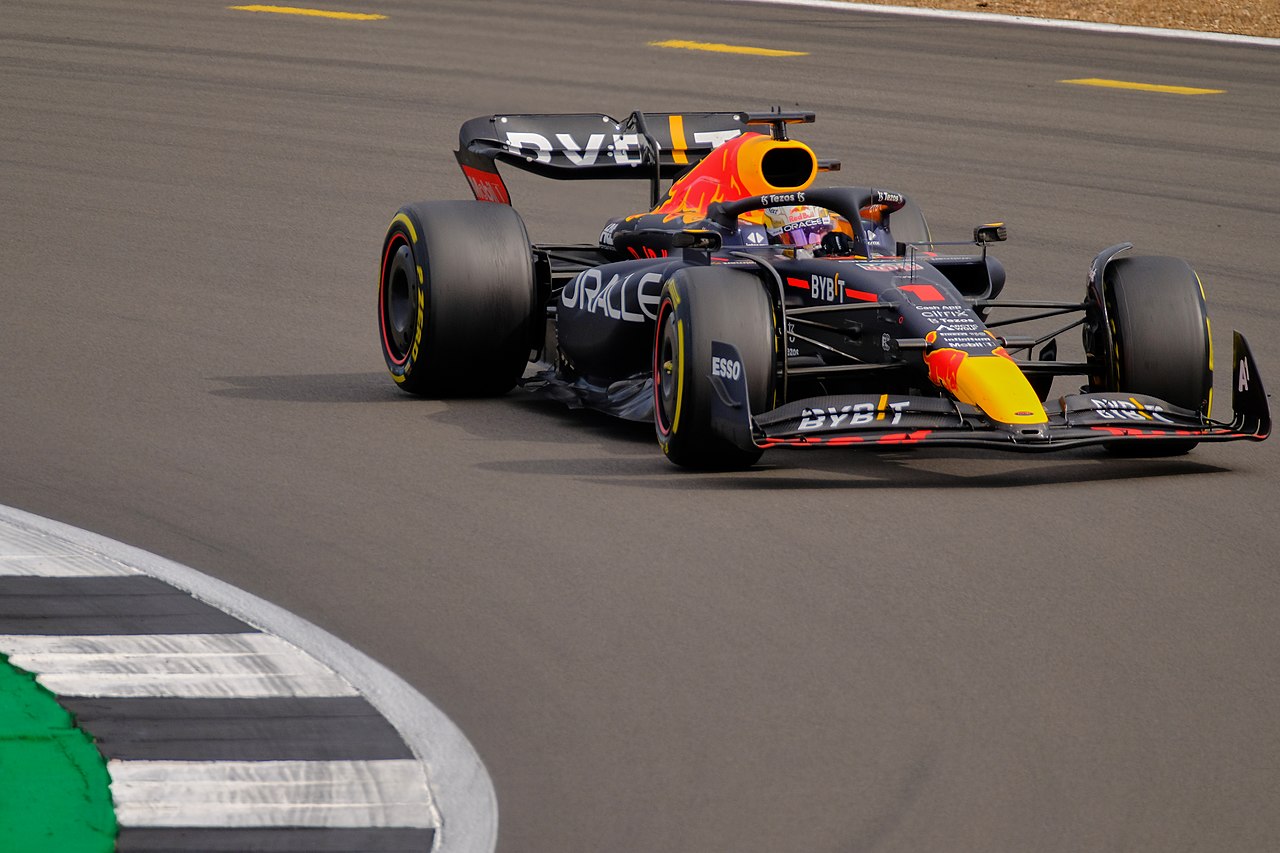 Another win for Max Verstappen at his home race puts him even further ahead in the championship battle. More mistakes from Ferrari kept Carlos Sainz off the podium and Mercedes fought hard, but only George Russell managed to get on the podium this weekend at the Dutch Grand Prix.

The weekend kicked off with qualifying on Saturday, where flares were officially banned from all future F1 races, after one was thrown onto the track during Q2, causing the session to be red-flagged for a period. A competitive Q3 saw both drivers from Red Bull, Ferrari and Mercedes looking promising for pole position, but after Sergio Perez brought out the yellow flag at the end of Q3 for putting his car into the gravel, ruining some drivers’ flying laps, it was Verstappen who secured pole. Charles Leclerc missed out on P1 by 0.021 seconds, making it one of the closest qualifying sessions we’ve seen all year. With Verstappen and Leclerc on the front row, Sainz and Lewis Hamilton made up the second row of the grid and Perez and Russell took the third row.

On Sunday, Verstappen got off to a good start, and managed to hold onto P1 during the opening laps. Hamilton made contact with Sainz, pushing them both down the order, and Magnussen slid off the track, hit the barriers, and went into the gravel trap, but managed to recover the car and continue.

During lap 15, Sainz pitted for fresh tyres, but the Ferrari mechanics weren’t ready for him, and the tyres were not at the pit box. During the chaos, one of the Ferrari wheel guns had been left in the middle of the pit lane, which meant that when Perez did finally emerged from his pit box, he ran straight over it, leaving it unusable. Sainz’s was stationary in the pit box for 12.5 seconds in total, nine seconds longer than the average, meaning he rejoined the race in P9.

As Hamilton was completing an overtake on Perez on lap 37, Sebastian Vettel came out of the pits, directly in front of the two cars racing, and sat in the racing line despite being shown the blue flags. This compromised Hamilton’s overtake and gave Perez another chance, but Hamilton managed to cling onto the position he had made up. Shortly after this, Russell easily overtook Perez due to his tyres being spent after his fight with Hamilton.

By the middle of the race, it was clear that both drivers for Red Bull and Ferrari were on two-stop strategies, whereas Mercedes were relying on a one-stop. This meant that it was likely that Verstappen would have to battle Hamilton and Russell for P1 after his second pit stop, making the race considerably more exciting.

With seven races left this season, Ferrari and Mercedes will be doing everything they can to take points away from the Red Bull team

However, on lap 44, Yuki Tsunoda stopped on the side of the track, claiming that his tyres were not properly fitted after his pit stop and took off his seatbelt. However, mechanics told him over the radio that there was nothing wrong with his tyres and he should continue, but as Tsunoda tried to put his seatbelt back on it became too loose and unsafe so he had to return to the pits.

The Alpha Tauri team then had a 30-second pit stop, in which mechanics attempted to retighten his seat belt, and sent Tsunoda back out into the race despite him being P20 and three laps behind the leader. Despite all this, after four corners, Tsunoda stopped the car again on the side of the track and this time did not restart. As a result, the virtual safety car was brought out which allowed Verstappen to claim a cheap pit stop against Hamilton and Russell, and led the cheering fans to assume that Verstappen had secured the win.

In another twist of events, Valtteri Bottas stopped suddenly at the first corner of lap 55 due to a sudden loss of power, and brought out the safety car, thus meaning cars would be brought close together for the restart. Two laps into the safety car, Verstappen pitted again for soft tyres to be faster for the closing laps, but this allowed both Mercedes cars to overtake for P1 and P2 in the race.

Hamilton was looking a likely favourite to win the race at this point, as many were unsure if Verstappen would have enough laps to make up two places before the chequered flag. However, the safety car brought all the cars through the pit lane to let Bottas’ car be removed from the track, and Russell used that opportunity to also put on soft tyres. This meant the order stood at Hamilton on used medium tyres, Verstappen, and then Russell, who were both on fresh soft tyres. This strategy call from Russell put Hamilton at a significantly disadvantaged position for the restart.

During the drive through the pit lane, the Ferrari team released Sainz straight into the path of Fernando Alonso, which awarded him a five-second penalty for an unsafe release, adding to the mistakes made by the Ferrari team this weekend.

The safety car came in on lap 60, leaving just 12 laps of the race to complete. However, at the restart, Verstappen overtook Hamilton straight away at turn one, as Hamilton’s medium tyres couldn’t compete with the fresh softs. Three laps later, Hamilton was also overtaken by Russell, dropping him to P3 and then P4 after an overtake from Leclerc. The Mercedes team not pitting him for fresh tyres during the safety car meant that he couldn’t compete with all the cars on newer tyres, and as a result he lost out on both a podium position and a significant amount of points.

Verstappen came home to win the Dutch Grand Prix, much to the delight of his home crowd, and also won an extra point for getting the fastest lap of the race. He was closely followed by Russell and Leclerc who made up the other two steps of the podium. Many have deemed Verstappen too far ahead in the drivers’ championship to be caught, but with seven races left this season, Ferrari and Mercedes will be doing everything they can to take points away from the Red Bull team.

Next weekend, F1 heads to Italy for the historic race in Monza that concludes the triple header. Ferrari will be desperate to impress their Italian fans, known as ‘The Tifosi’, and gain another win in the championship fight.