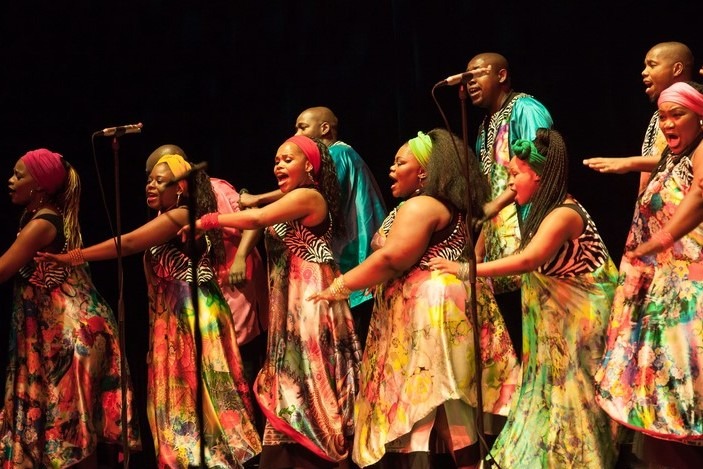 Twenty years after the formation of the Soweto Gospel Choir, the group continues to go from strength to strength. Freedom is the choir’s 2018 album. It explores themes of longing, community, and justice. To date, they have been nominated for five  Grammys and in 2019 they won their third for Freedom. The Soweto Gospel Choir have graced venues across Europe, Australasia, and North America.

After having the privilege of seeing the choir perform live, it’s no wonder that they received South African President Cyril Ramaphosa’s stamp of approval. Their performance is bursting with wit, soul, and history. The in-group fighting never failed to make the audience laugh. Let’s say a female singer was about to have a solo and the men were still dancing, she would push them out of the way and perform. It was glorious. In their act, the Soweto Gospel Choir effortlessly balance physical humour and traditional dance. The album was created to mark the centenary of Nelson Mandela’s birth and pay homage to the great man. As well as honouring those who fought against apartheid, the Freedom tour celebrates the musical and linguistic heritage of the rainbow nation.

In ‘Asimbonanga/Biko’ the choir share a message of hope. Like in most of their songs, these lyrics oscillate between indigenous South African languages like Zulu and Xhosa and also English. This song was first performed in their 2005 Blessed tour. Seventeen years later and their vocal prowess is just as mesmerising. In this song, the orchestrated interlude allows for reflection. Not unlike a congregation before a service ends, quietly meditating on what God has placed on their hearts. Within minutes, this choir floods the space with pride and passion only to demonstrate equal dedication to sombre melodies that speak to the suffering of millions who lived through apartheid.

‘Bawo Thixo Somandla’, the 10th song on this album, is a wolf in sheep’s clothing. The song feels deceptively upbeat, yet the lyrics are miserable. Translated, they mean: “What have we done? What have we done? / What have we done, My Lord?”. This also happens to be the only track that has no solos. This absence might be there to show that the brutality of apartheid was not something that someone could simply overcome by virtue of their intelligence or hard work. It could suggest that in this state-enforced oppression, there would be no exceptions. In contrast to the 10th song, the ‘Freedom songs medley: Jikijela/Rolihlahla Mandela’ has no qualms about showing anguish. In this song, the slow tempo, and the heartfelt solos from talents like Jeanette Mazibuko and Victor Makhathini demand empathy. The ‘Freedom songs medley’ needs no masquerade.

The highlight of ‘Jikijela’ has to be the rich texture of the chorus. This polyphony might stand as a reminder to the audience that the pain of the past runs deep. Seeing this medley performed live, the atmosphere was reverent. On stage, some singers had their hands lifted in devotion, others were gently nodding, all vocalising with unbreakable focus. When they sing, they commit to the song with all their being. From their facial expressions to the way that they interact with one another during duets, they made an hour-long performance seem timeless.

Similarly, in the ‘Spiritual medley’ the vocalists would sing as if they were checking in on one another. This personal touch took African American spirituals created some two hundred years ago and made them resonate with 21st century Britons. An hour was too short a time to be in the audience of such a worthy show.

Freedom is filled with references to the Soweto Gospel Choir’s previous albums, most notably Faith (as both have ‘Spiritual Medley’ and ‘Hallelujah’) and Blessed (the common denominator being ‘Asimbonanga/Biko’). This album is evidently inspired by the work of titans of South African music like Miriam Makeba and Letta Mbulu. Their admiration for these artists/political activists is evident, even going as far as making renditions of their songs: ‘Mama Ndiyalila’ and ‘Jikijela’ respectively. In the minimal changes to these songs, the choir honour the work of these gifted women.

The choir will be performing selected songs from this album over the next six months and will be back touring the UK in October 2022. So, why bother getting tickets? Frankly, their talent speaks for itself. They are shining examples of what it means to be an artist: fiercely proud of where they come from and gracious enough to share it with the world through their work. By their commitment to performing South African folk songs, the members of Soweto Gospel Choir embrace their cultural roots. Without pretence, Freedom refuses to shy away from the horrors of history. Its tracks are filled with a refreshing ancestral reverence that turns a mirror to the listener, asking them who they want to be.