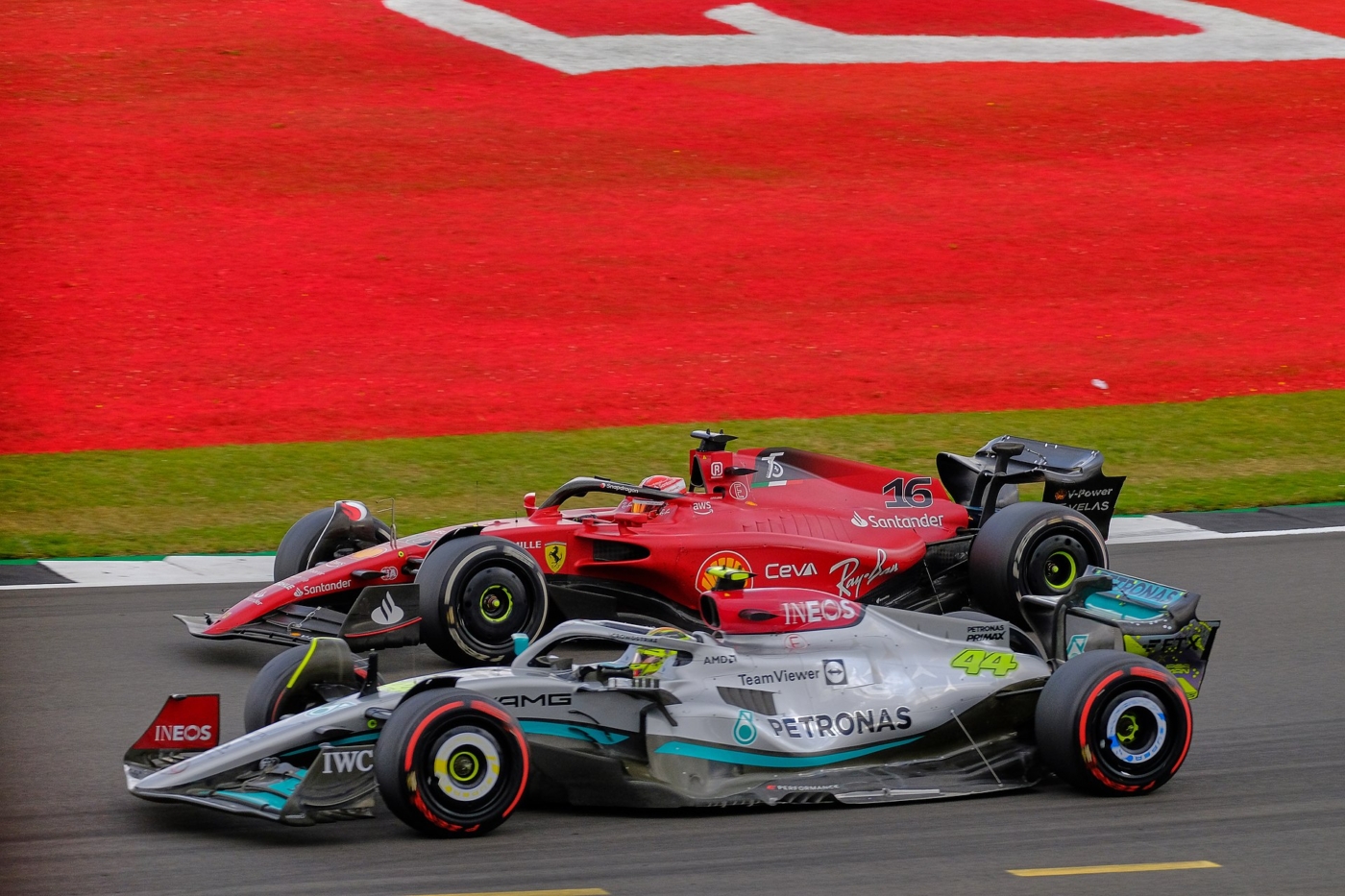 Flawed Ferrari open the door for Red Bull and Mercedes

An unexpectedly exciting French Grand Prix delivered yet another win for Max Verstappen, a double podium for Mercedes, and disappointment for both Ferrari drivers. After looking strong all weekend, a mistake from Leclerc found him in the wall, and a poorly-timed team call lost Carlos Sainz valuable places and points.

Qualifying kicked off on Saturday with Sainz and Magnussen both taking engine penalties for changes made to their cars, meaning they would both be starting at the back of the grid, regardless of their qualifying place. As a result, Sainz used his position in Q3 to offer his teammate a tow which won Charles Leclerc pole position but decided not to set a lap time of his own, in order to save the condition of his tyres. With Leclerc on pole, Verstappen and Sergio Perez lined up P2 and P3 for Red Bull, and Lewis Hamilton placed his Mercedes in P4 for the race, leaving him in a very strong starting position.

On Sunday, Leclerc managed to get away well and stay ahead of Verstappen, who has been known to make an early dive up the inside and take over the race lead. Yuki Tsunoda and Esteban Ocon made contact on lap one, after Ocon took the corner at the wrong angle, leaving Tsunoda with damage and Ocon with a five second time penalty.

By lap 17, Sainz, who had started P19, had already made up 10 places since the start of the race and was looking on track for a high points finish. Being trapped in the dirty air of Leclerc’s car for too long caused major degradation to Verstappen’s tyres, forcing the Red Bull driver into an early pit stop to switch to hard tyres.

Leclerc looked to be comfortably maintaining the lead, when suddenly, on lap 18, he crashed into the barriers after a mistake on a corner. As he was unable to reverse out of the wall, he brought out the safety car and had to retire from the race. This allowed everyone to make cheap pit stops for hard tyres, and left Verstappen leading the race. While everyone was darting into the pits, Sainz and Alexander Albon almost collided in the pit lane, after an unsafe release from the Ferrari team, meaning Sainz was given a five-second time penalty.

Shortly after, Tsunoda was forced to retire after receiving too much damage during his crash with Ocon. On lap 21, the safety car came in and allowed Sainz to continue his storm up the field. A racing incident between Nicholas Latifi and Kevin Magnussen on lap 38 caused them to spin off track and left them both with too much damage to continue the race.

Stakes will be high for Leclerc, who will need to score serious points to remain in the fight for the World Championship

By lap 41, Sainz was asking for Ferrari’s strategy concerning his five-second time penalty, as he could either serve it during a pit stop in the race or carry on to the end of the race on his medium tyres and have the five seconds added to his finishing time. Originally, Ferrari decided to let Sainz continue to the end of the race, which allowed him to overtake Perez and make his way up to P3, but while he was making the move on Perez, the team changed their plan and ordered him to box.

This decision lost Sainz even more places, as when he came out of the pits, he was down in P9, with not enough laps to fight his way back up the field. This caused frustration and disappointment for Ferrari fans, as many saw this as yet another strategic mistake to add to the count this season.

Meanwhile, George Russell also attempted to overtake Perez, but instead forced him off the track and allowed Perez to re-enter back in front of him. Shortly after, Zhou Guanyu brought out the virtual safety car as he stopped his car on track, bringing the total number of DNFs for the race to five. When the safety car was coming in on lap 51, Russell was able to overtake Perez while he was still driving at his reduced speed, putting him into a podium place.

Sainz managed to fight his way back up to P5, and got the fastest lap, but ran out of time to make up any more places despite having the better pace. Verstappen won the race and Hamilton finished P2, both having relatively quiet races after Leclerc’s crash. Russell managed to come home P3, giving the Mercedes team two podium places.

Next week, Formula 1 travels to Budapest to race at the Hungaroring, for the last race before the three-week summer break. Stakes will be high for Leclerc, who will need to score serious points to remain in the fight for the World Championship.