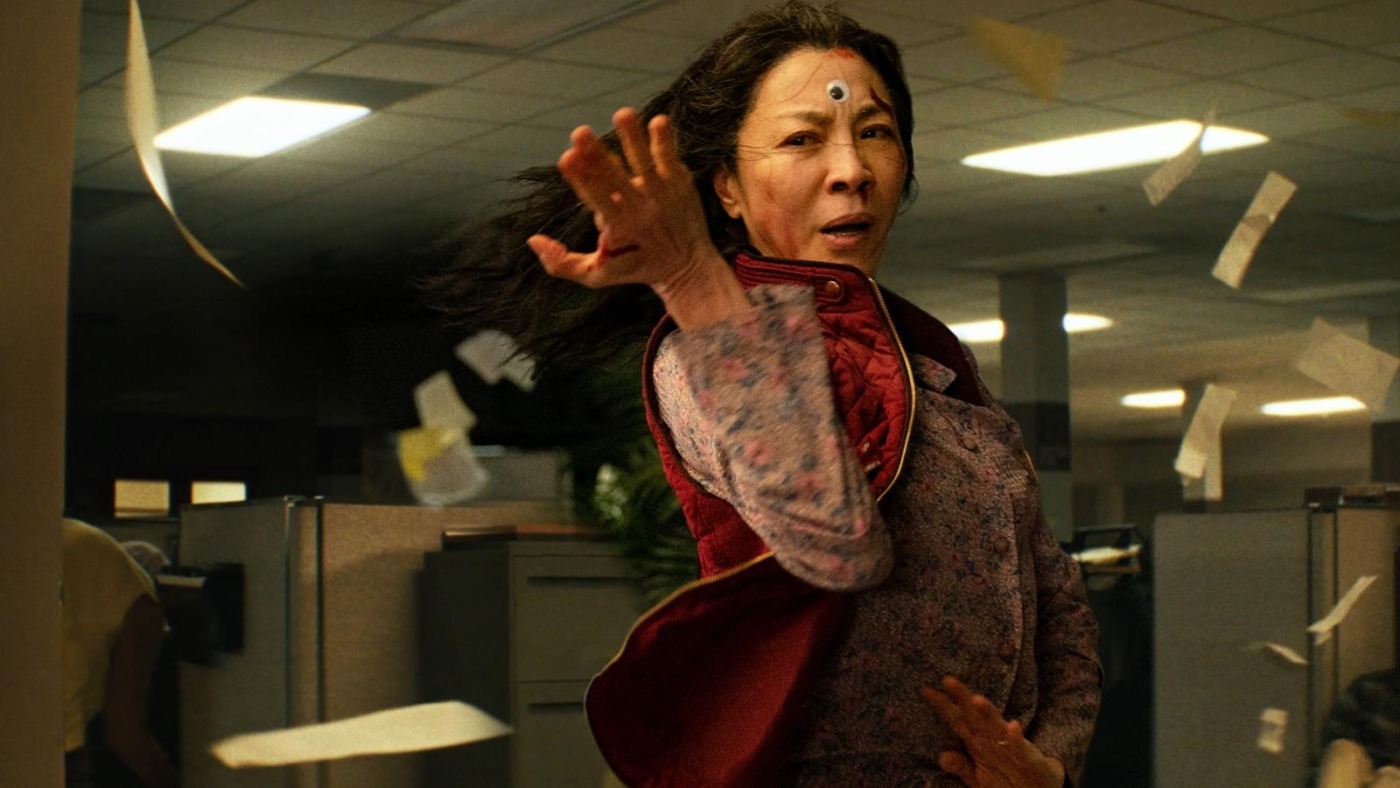 A24’s Everything Everywhere All at Once is a transcendental, once in a generation masterpiece. Watching in the cinema, I felt hypnotised. Visually kaleidoscopic cinematography tells the story of an unlikely heroine in a quest that takes her across universes. Evelyn, played by Michelle Yeoh, goes from struggling launderette owner to world saver in a bizarre plot to defeat the all-powerful verse jumping Jobu Tupaki. In spite of an undeniably ludicrous narrative, I was left awestruck, reaching for a tissue.

Underneath entrancing visuals, the film remains a story of the power of love, reconciliation and our beautiful (insignificant) existence. Accessing powers from across universes, Evelyn learns to accept her daughter for who she is. The opening sequence of the film unveils a woman dictated by worry. Evelyn denies her daughter the chance to come out to her father; doubting his acceptance. Upon the film’s unravelling of reality, Joy (Stephanie Hsu) is revealed as the godly powerful Jobu Tupaki. Pushed to her limits by Evelyn’s ‘Alphaverse’ counterpart, Jobu plots to self-destruct, threatening to destroy all worlds. The fate of Joy herself, and the destiny of every existing universe, lay in Evelyn’s hands.

Bizarre universes and counter-existences kept me laughing the entire way through. Initial multiverse chaos ensues within a meeting with IRS inspector, Deirdre Beaubeirdre; played spectacularly by Jamie Lee Curtis. Husband Waymond (Ke Huy Quan), changes into his ‘Alphaverse’ self, informing Evelyn that the fate of all parallel worlds does in fact depend on her. From this point onwards, the office block descends into a multiverse war ground; fusing action and comedy to perfection. In fighting multiverse demon Deirdre, verse jumping forces Evelyn to carry out bizarre tasks; in a bid to access skills she possess in other lives. Evelyn’s love confession to demon Deirdre left me in stitches!

Moreover, throughout the entire film the cinema was an eruption of laughter. Especially as Evelyn’s splintered mind revealed worlds in which humans had sausages for fingers, and chefs could be puppeteered by raccoons. Yet, hilarious moments were quickly followed by scenes which brought me to tears. In particular, the character of Waymond remained my favourite in every universe. A moment unfolds as Evelyn’s singer-self reminisces with his counter-existence. ‘Even though you’ve broken my heart’, he confesses, ‘in another life, I would’ve really liked just doing laundry and taxes with you’. I felt I’d melted away.

I felt physically involved with the intertwining universes; utterly transfixed

The majority of the film is a highly visceral and surrealist experience; relying on visual intensity to convey Evelyn’s strengthening verse-jumping powers. In one of the most striking sequences, I felt I’d levitated from my cinema seat. In a bid to enhance her mind, the film unravels into a transcending successive montage, conveying Evelyn’s existences across the entire multiverse. Unable to blink, the screen before me had burst into flames. Evelyn’s face begins to morph; flashing between her glamorous singer, pizza deliverer, church priest, world leader and sausage-fingered counter-lives. I felt physically involved with the intertwining universes; utterly transfixed. Moreover, for me, this moment felt more than just a sensational spectacle. I felt I was absorbing every dream; every being Evelyn’s unconscious mind had ever suppressed. I was truly mesmerised.

Ultimately, Everything Everywhere All at Once made me feel like I had been transported. For so long, the concept of the multiverse has been churned and poorly used by the Marvel franchise. Finally, A24 has executed it with justice. Despite a narrative driven by ridiculous universes and an all-powerful bagel, I left the cinema utterly speechless. Never before have I experienced a film so hilariously ludicrous yet so effortlessly heart-wrenchingly. In the film’s penultimate multiverse chaos, in saving her daughter, Evelyn saves herself. Through Waymond, she discovers that the power of kindness transcends across every existing universe. Brought to tears, I left the cinema, lost in thoughts of my existence. I was a small and stupid being, in a world where nothing truly mattered.