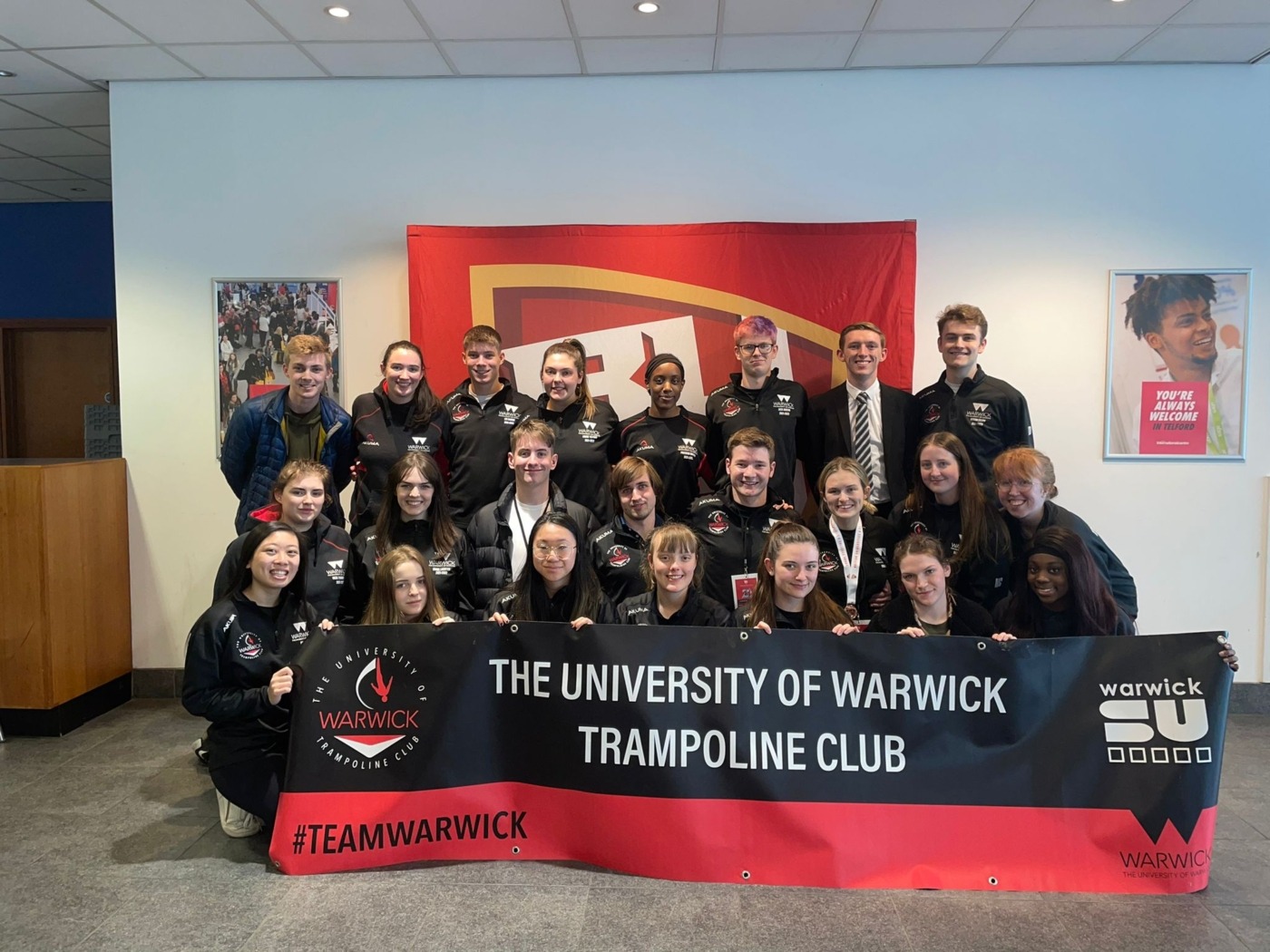 What a season it has been for Warwick Trampolining club who are your Southern Universities Trampolining League (SUTL) runners-up!

The impact of the coronavirus pandemic forced a premature end to the 2019/2020 competition season, with the last competition held on 14 March 2020. The pandemic also meant limited training sessions for the club overall. Despite not competing for over a year, the club were ready to take on Bath SUTL 2021 after finally resuming normal training sessions. It kicked off to a great start with 33 out of 40 attendees competing, the biggest competition cohort the club has ever had and one of the largest at the competition.

Though there were just three panels, a few members very narrowly missing medalling and it being a challenging weekend overall, Warwick trampolining took home nine medals, two of which were SS2 synchro, with Louisa Harris and Emma Reid in first and Matt Arnull and Bailey Massey in second.

The new year brought on Medway where success from Bath spurred the club on to perform their best yet again. Podium sweeps of SUTL 2 and SUTL 6 mens categories was the highlight of the competition: in the SUTL 2 men, we had Dieter Curran first, Bailey Massey second, and Jack Austen third. The SUTL 6 men saw Louis March come in first, Chris Lewis second, and Kieran Drury third.

Some of the cleanest executions were seen in these categories, as well as in SUTL 3 women, where the only two Warwick competitors for that category took the first and third spots (Steph Garside and Emma Reid respectively).

Competitors had also beaten personal bests and moved up SUTL levels, particularly Leo Sandoe and Steph Garside, who had progressed from SUTL 4 at their first competition to SUTL 2 at their penultimate competition. Overall, Medway was a brilliant start to the new year, setting the tone for the rest of the competition season!

Although the third competition of the year had been cancelled which came as a disappointment to members of the club who had been working hard on their routines, it made the club more determined for the BUCS (British Universities and College Sport) championship on 26-27 March.

The whole team worked very hard with improvements clearly visible in individual scores and synchro. Katie Barber and Chardonnay Bradshaw-Shallow went from placing 21st at their first competition to near-medalling at BUCS.

The last SUTL competition on 30 April (Southampton) was an amazing end to the season. The only Warwick competitors for SUTL 2 mens category, Jack Austen and Bailey Massey, took a stunning first and third place respectively.

Lewis Hays claimed his first gold medal in SUTL 5 mens, while Ed Mewes gained second place and his first competition medal in SUTL 6 men. It has been a record-breaking year for the club despite a challenging season of injuries, training and last-minute routine changes.

For more information find @Warwicktramps on all socials, and to get involved, visit the SU website.