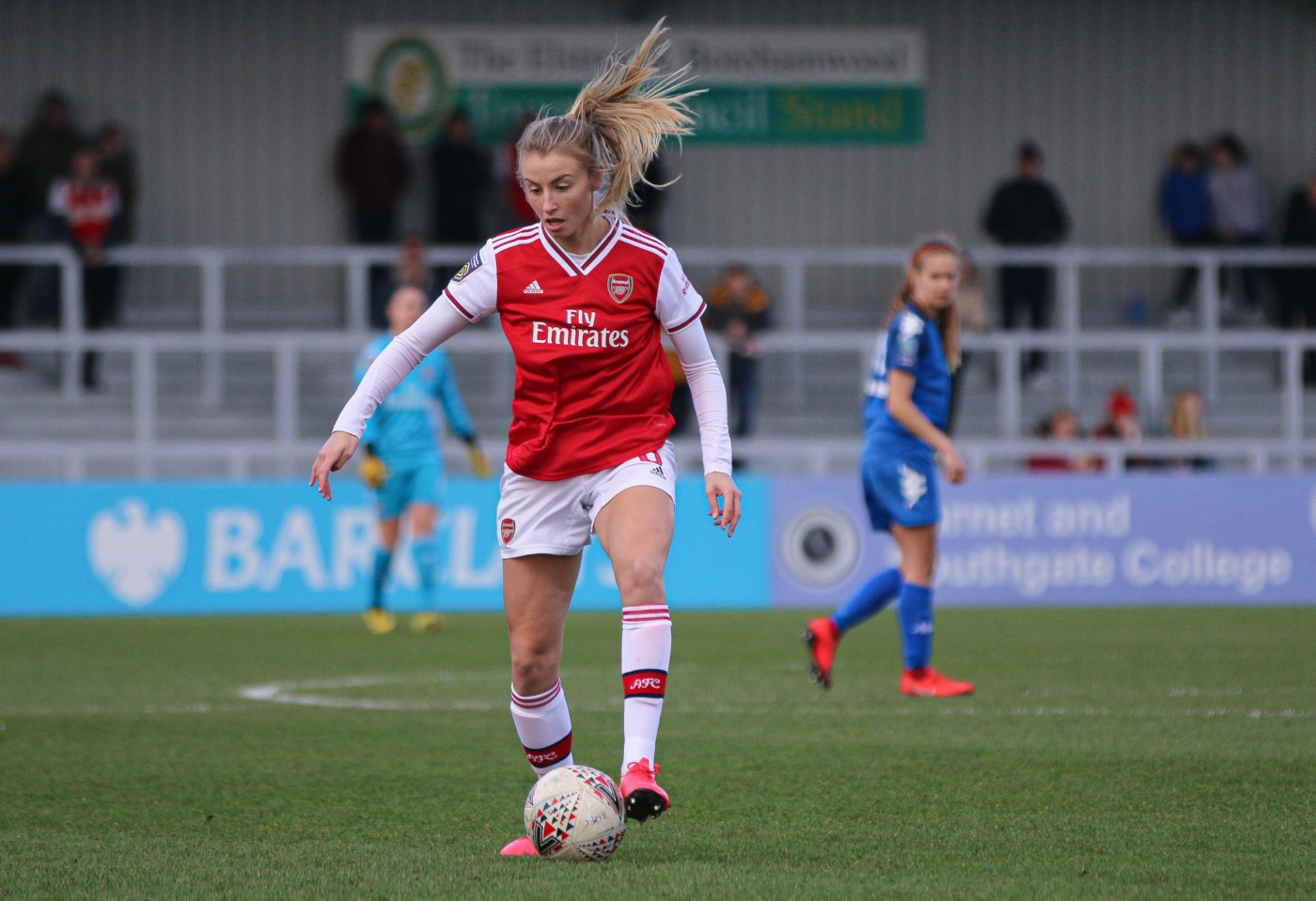 Leah Williamson was always destined to be a star. From a young age, hope and expectation were thrust upon her shoulders as she rose through the ranks at Arsenal, from fan to Arsenal leader and, finally, England captain.

Growing up in an Arsenal-supporting household, Williamson was also swallowed up by the mass hysteria of the Gunners. It is quite fitting that her first major tournament appearance actually came as a fan. Williamson was a mascot for the 2007 UEFA Women’s Champions League Final as Arsenal won 1-0 over Swedish side Umeå. As a fan of the great Arsenal women’s side, boasting the likes of Alex Scott, Jayne Ludlow, Kelly Smith, Rachel Yankee, and Faye White, Williamson grew up watching those she would emulate.

As well as being somewhat a lucky charm as a mascot, Williamson always possessed a natural footballing ability. She got her big break aged nine, as her coach at Rushden & Diamonds moved to Arsenal and, after a couple of trials, Williamson followed suit.

Williamson made her Arsenal debut the day after her 17th birthday, coming on for Yankee in a 2-0 defeat against Birmingham. Within a year of that debut, Williamson had established herself as a key member of the Arsenal team. Her rise to the first team and as one of the best young players was epitomised by the signing of her first professional contract as well as winning the PFA Young Women’s Player of the Year award in 2015.

Williamson began her career as a technically gifted central midfielder and was primarily utilised as a number six or eight throughout the majority of her career. However, this would change following the appointment of the enigmatic Joe Montemurro as Arsenal Women’s new head coach.

Montemurro favoured a progressive passing game which relied heavily on the ability of his defenders to be able to play their way out of defence. Williamson’s combative style in midfield, alongside her composure and passing ability, was identified by the new coach as perfect for his modern-day defence.

Under Montemurro, Arsenal was revolutionised. Having endured a rather stale and stagnant period since that Champions League success and the rise of Chelsea and Manchester City, Arsenal needed to change. Williamson would become integral to the revolution as the Gunners went on to win the Women’s Super League in 2019.

Williamson’s leadership qualities have always been clear. Her importance and influence at Arsenal were shown as she was entrusted to lead Arsenal out as deputising captain on occasion.

Her talents have not just been acknowledged at Arsenal, but also internationally. Perhaps the most memorable moment for Williamson in an England shirt was when for the Under-19 side, she scored a retaken penalty five days after the game’s full-time whistle to send her side to the European Championships.

Williamson made her senior debut in June 2018 against Russia, coming on for Kiera Walsh in the 84th minute. Williamson has gone on to make 27 appearances for the national side and was named as permanent England captain in April 2022.

Taking over from Steph Houghton as captain, Williamson has large boots to fill. However, these boots are not unfamiliar to Williamson. The former England captain played for Arsenal until 2014, before switching to Manchester City, and the Houghton-sized hole left in the Arsenal defence was eventually filled by Williamson.

It could be argued that Williamson perhaps lacks the tournament or captaincy experience required to lead England in the upcoming European Championships, but this is a limited argument.

Throughout her whole career, Williamson has been described as a leader and been touted as the future Arsenal and England captain. It has been a question of ‘when’, rather than ‘if’, she becomes the national team captain.

It is arguably the perfect time for Williamson to become the new captain. The growth of women’s football in the last couple of years has been exponential and ushering in a new face of the modern game is fitting.

The role of the England women’s captain is bigger than it has ever been. Williamson will not only have to be the leader on the pitch, but will also have to be the face of the new era of women’s football.

When the European Championships start with England kicking off against Austria on 30 June, Williamson will surely look down at the mascot by her side and see herself in 2007. The eager Arsenal fan that grew into the England captain will hope that she will soon mean as much to the new generation of football fans as Alex Scott, Jayne Ludlow, Kelly Smith, Rachel Yankee, and Faye White meant to her.