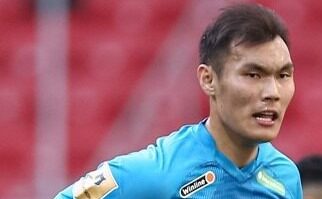 The Nations League may come at the wrong time for football fans, especially those in the UK. The conclusion of the Euros, followed closely by the resumption of all the major leagues has resulted in little downtime for players and fans alike.

Therefore, you would be excused from paying little attention to the League A matches featuring Hungary’s drubbing of England, let alone down in the uncovered depths of League C. However, there you would find Kazakhstani National Football Team, who, after a 2-1 win against Slovakia, find themselves top of Group 3, with 10 points and two games remaining.

The breakup of the Soviet Union resulted in the formation of 15 separate countries, forming 15 new football federations. While the Soviet’s record amalgamated with the Russian National Football Team, one of those newly established federations was Kazakhstan.

Founded in 1992, introduced into the national football sphere as a member of the Asian Football Confederation, it wasn’t until 2002 that it became a UEFA member, with the nature of Kazakhstan as a transcontinental state allowing such a change.

The change resulted in an inferiority in contrast to its other separated USSR relatives, the likes of Uzbekistan and Kyrgyzstan remaining AFC members. However, the UEFA Euro 2020 qualifying began to show The Hawks’ changing form.

The qualifying stages began with them welcoming a Scotland team managed by former Birmingham City head coach, Alex McLeish. 90 minutes in Astana, renamed to Nur-Sultan just two days after following a unanimous vote in Kazakhstan’s parliament, became a 3-0 rout of the Scots, a rating discrepancy of 40th in the World to 117th, which has left McLeish without a job ever since.

Two goals in the first 10 minutes by midfielders Yuriy Pertsukh and Yan Vorogovskiy made Scotland look second best for the final 80 minutes. BBC Scotland headlined the game as “arguably the most embarrassing result in Scotland’s history”.

Their home result was coupled with a 1-1 draw away in Cyprus and, although they ended just fifth out of the six-man group, featuring the famous minnows San Marino, their 10 points in 10 games is their best qualifying performance to date.

There are hopes that talents like Alip, Astanov and 19-year-old Maksim Samorodov will accelerate the growth of their nation

A World Cup qualifying performance, with just three points in eight games, was nothing spectacular, though placed in a group containing France, Ukraine and Finland certainly provides context to their woes.

Mikhail Gabyshev’s throw-in routine ended up at Elkhan Astanov’s feet, splitting the defense in the process and a small pass to Darabayev meant the ball ended up in Fulham’s Marek Rodak’s bottom right corner.

Two aired crosses in the first half both ended up in the Rodak’s goal in the reverse fixture, as Kazakhstan capitalised on Slovakia’s poor positional awareness. Six points in two fixtures against a European team ranked in the top 50 of the FIFA Men’s National Team rankings forecasts that Magomed Adiyev’s men are on the correct path.

Just one win in their remaining two fixtures, against Azerbaijan and Belarus, would secure promotion into League B for Kazakhstan. They will hope the campaign provides a platform for themselves to build upon.

Of their current squad selected for the Nations League, only two players feature outside of the Kazakhstan Premier League. Yan Vorogovskiy, scorer against Scotland in that monumental result, plays with RWD Molenbeek in the second division of Belgium, while young talent Nuraly Alip is on loan at Zenit St. Petersburg, with an option to buy, where he has featured already 10 times this calendar year.

The ceiling for the Hawks can only go as high as the knowledge they are taught lets them, and football knowledge is not something which can be easily spread over just video or text. Many cases in pre-modern football recite the ability to assimilate knowledge through the diversification of the country’s footballers play in as the main factor for the increase in playing ability.

There are hopes that talents like Alip, Astanov and 19-year-old Maksim Samorodov will end up playing at a level higher than that of the Kazakhstan Premier League and accelerate the growth of their nation.

The last week of September may be a big time for Kazakhstan and England alike. While England may face relegation to League B, Kazakhstan are just one win away from reaching those heights. Who knows, maybe we shall see Southgate’s men travelling to Nur-Sultan in the not too distant future, and not as a throwaway qualification game.