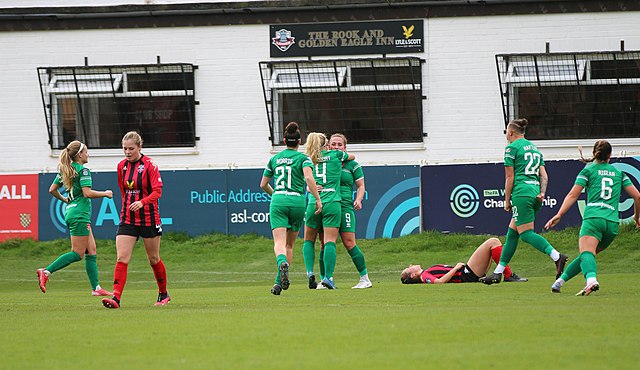 Coventry United charted an escape from relegation that wouldn’t seem amiss unfolding on the set of a Hollywood production. The FA Women’s Championship (FAWC) side overcame a ten-point deduction in dramatic fashion with an injury time screamer away at Watford.

At the turn of the year Coventry United, the University of Warwick’s local women’s team were facing the very real prospect of ceasing to exist. They were to be put into liquidation and the contracts of both players and staff to be terminated.

How, then, have the plucky Midlanders found themselves secure in the FAWC for another season?

On 4 January, just hours before CULFC would have entered liquidation Lewis Taylor, CEO of Energy Angels, stepped in to save the club. He pledged to clear debts in addition to investing £200,000-£250,000  to see the club through to the end of the season. It wouldn’t be the first-time last-minute intervention that proved Coventry’s saviour.

As a result of rules regarding insolvency, Coventry still faced a ten-point deduction leaving them wallowing in the relegation zone. Not only did this pronounce a seemingly insurmountable fight for survival but also appeared misdirected and disproportionate.

The penalty inflicted the club and players, rather than those responsible for seeing the club into voluntary liquidation, with a sizeable points deduction. With just 22 games played by each team in an FAWC season, ten points consigned Coventry to what many thought would be certain relegation.

With six points to their name at Christmas, the West Midlands club were left adrift on -4 points following the sanctions. It would take something special for a club who were on the precipice of collapse to turn this around.

With the displays of grit and embattled success from this season, they will surely be hopeful for what is to come

But special was certainly in Coventry’s armoury. Following a shaky start to the year, an undefeated spell began to sow seeds of hope. Keeping eventual third place finishers, Bristol City, to a draw away from home signalled their potential.

United in adversity the club saw this undefeated run through to the final match of the season against fellow relegation candidate Watford. The game, played out at Vicarage Road, would require Coventry to take all three points to seal survival.

With chances seldom presenting themselves to either team, it was looking as though Coventry United might be felled at the final hurdle.

Enter Mollie Green. Stepping up to take a long-range free kick in the 97th minute she propelled the ball into the top corner in stunning fashion and propelled her side out of the relegation zone.

Yet again, Coventry were saved at the eleventh hour with almost the very last kick of the FAWC season. Celebrations were duly emphatic with pure relief exuding from the players who had just months ago believed they were out of a job.

Their survival will no doubt be recalled for years to come as a tail of triumphing versus adversity in true Hollywood trope fashion. Yet their plight should not just be anecdote but rather taken as a warning of the progress the women’s game still needs to make.

A club who lacked support from football’s powers at a time they were in most need. Their story is one of triumphing in spite of their situation and regardless of how magical it reads, this shouldn’t be allowed to happen again.

Another season in the FAWC beckons for Coventry United and with the displays of grit and embattled success from this season, they will surely be hopeful for what is to come. This isn’t a team ready to fold just yet.