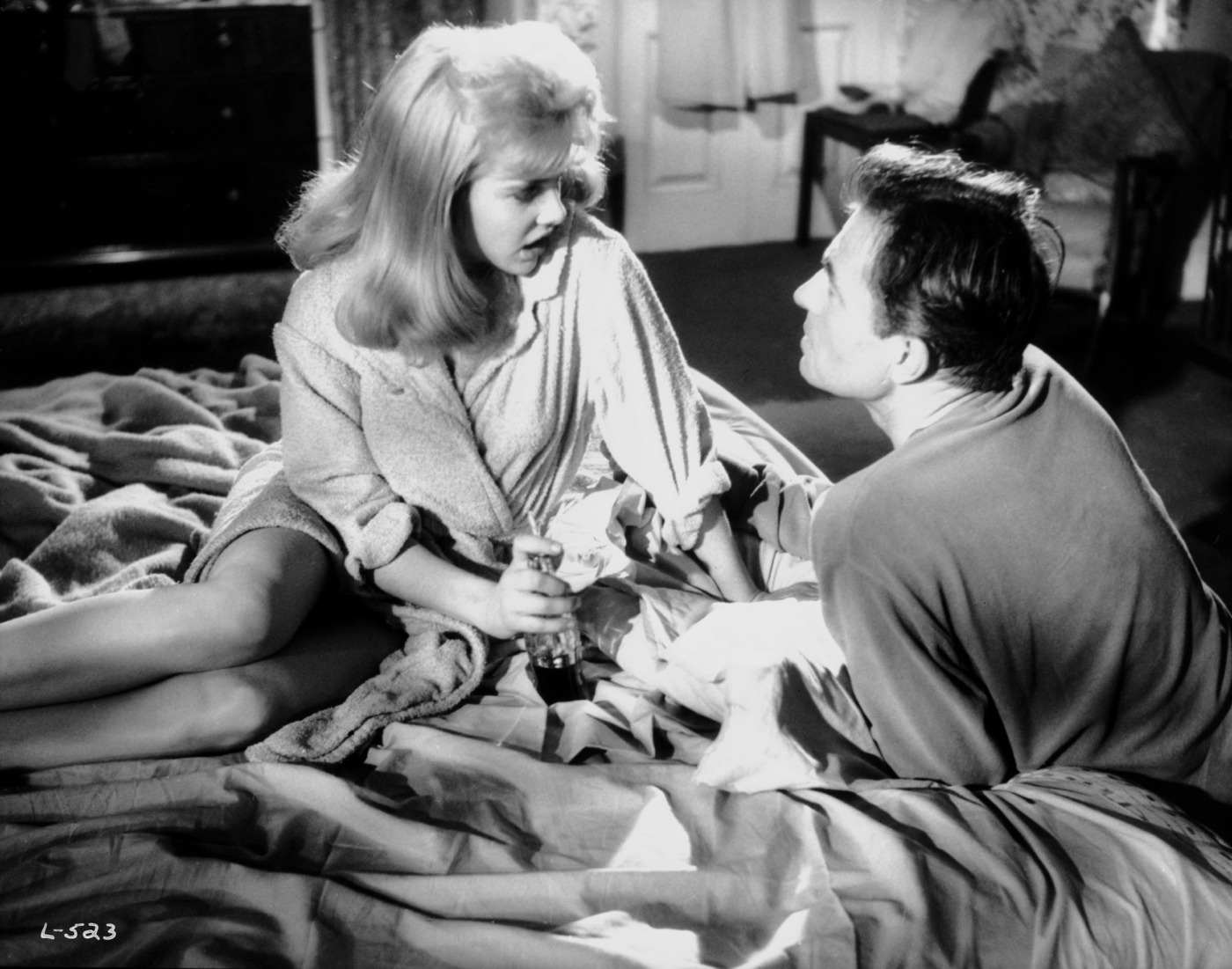 A friend once told me that every single Stanley Kubrick film is a comedy. Though I’m not sure I entirely agree (I don’t find myself chuckling along to The Shining) it is certainly true that Kubrick had a consistent, outrageously sharp sense of humour. His nuclear apocalypse movie Dr Strangelove is a goldmine of pitch black comedy, sitcom star Leonard Rossiter gives a laugh-out-loud performance in Barry Lyndon and at times A Clockwork Orange almost resembles an ultraviolent Carry On movie.

For all the satirical black comedy Kubrick laced into his most critically acclaimed movies, they never get any darker or funnier than his most underrated film: Lolita

The key to Kubrick’s comedy is that it’s all satirical. The joke is always on the powers that be, typically presented as snobbish, upper class Oxbridge twits or deluded, sex-crazed, gung-ho American military commanders. For all the satirical black comedy Kubrick laced into his most critically acclaimed movies, they never get any darker or funnier than his most underrated film: Lolita.

Following the story of Humbert Humbert, a European academic who travels to America and develops a repulsive sexual obsession with a 14-year old girl, Kubrick’s movie is entirely focused on arguably the darkest and most upsetting crime that it’s possible to commit. The question is, how on Earth did Kubrick dare to make Lolita a comedy? More importantly, how on Earth did he manage to succeed?

The trick is the same as ever: satire. Humbert’s abuse of Dolores Haze isn’t going to make anyone laugh. The complete and utter incompetence and obliviousness of every major social institution in American society to Humbert’s blatant criminal scheming might. Kubrick goes for the jugular by showing us Humbert avoiding detection time and time again directly under the noses of all that America holds holy.

In a cosy, middle class suburb decorated with white-picket fences, green grass lawns and chirpy neighbours, the most insidious human evil is manifested in a well-spoken academic wearing a nice suit. Kubrick made an incredibly wise decision when he cast James Mason as Humbert. The character in the novel is of an ambiguous nationality but appears to be from Western mainland Europe and was born in Paris. Kubrick’s Humbert is unmistakably British and quintessentially elitist – this makes the movie.

Mason provides Humbert with an impeccably polished and polite demeanour that consistently fails to disguise his utter contempt of all things American. A condescending flatterer and a lover of the literature of other deeply problematic intellectuals, Humbert is able to scheme and smile his way past every single safeguard that could be put up to stop him. Thanks to his status as an academic and his superb diction, Humbert is made invincible and undetectable. Surely an Englishman of such fine manners and schooling would never dream of doing such a thing?

All it takes is a confident, well-spoken white man in a suit, and this America will bend over backwards to let him do whatever he wants

This is the masterstroke of Kubrick’s adaptation. By casting Mason as an English Humbert and letting him loose on the New England suburbs that will inevitably welcome him with open arms, Kubrick makes his Lolita the ultimate subversive attack on post-war American society. All it takes is a confident, well-spoken white man in a suit, and this America will bend over backwards to let him do whatever he wants. He’s able to invade the affluent American family home, bamboozle the girl’s mother, fool the neighbours, trick the teachers and commit unspeakable acts right under the incompetent eyes of the police and the clergy.

Two moments in particular stand out. Whisking Dolores away to a hotel with the very worst of intentions, Humbert learns that only one room in the entire establishment is free. Every single other bed is occupied by an officer of the law. Humbert, we discover, has unwittingly chosen to commit his crime in a hotel playing host to the region’s annual police convention.

He gets away with it.

The other moment sees Humbert have all obstacles to his criminality removed as if by magic. After the sudden death of Dolores’s mother, Humbert decides to take a relaxing bath. We watch as friends of the family enter the bathroom to find our sinister lead floating serenely and enjoying a glass of scotch. As he’s entrusted with the care of the girl he’s desperate to harm, he nonchalantly accepts his new position of ultimate trust. Kubrick scores the scene with a relaxed 60s pop tune. Humbert’s in heaven and Kubrick is keen to let us know it.

This vapid society of drive-ins, proms, TV and Coca-Cola can be easily and ruthlessly exploited by a wily, confident, upper-class Brit

Kubrick’s satire in Dr Strangelove is aimed at Cold War-era political lunacy. In A Clockwork Orange his satire is aimed at state control and overreach. In Lolita, Kubrick ridicules and excoriates the gullibility and incompetence of Eisenhower-era white America. This vapid society of drive-ins, proms, TV and Coca-Cola can be easily and ruthlessly exploited by a wily, confident, upper-class Brit. Humbert is believed and trusted because he sees himself as above American culture, and the Americans secretly agree with him.

Kubrick depicts middle-class American society as vacuously conformist and populated by bored well-dressed ladies seeking to break the monotony of their lives by getting to know Humbert a little more intimately. In this context, the British academic’s utter fixation on a 14-year-old child and her dating habits is mistaken for old-fashioned prudishness and traditional moral conservatism.

Humbert can do no wrong, arouse no suspicion and commit no foul. In a society so doggedly eager to impress a man of high status and turn a blind eye to his conspicuous behaviour, any crime becomes possible. Lolita is a savage bullet fired into the heart of a complacent, conservative, mass-consumerist society. It’s a reminder that white picket fences and pretty wall-paper don’t change human nature, that the guardians of our society are easily led astray by a charming smile and that there’s more to a man than the way he speaks.

It’s no coincidence that surrealist filmmaking legend David Lynch considers Lolita to be his favourite Kubrick movie. Years before the voyeuristic, criminal mayhem of Lynch’s evil-in-small-town-America classic Blue Velvet, Kubrick had given us his own story of depravity in the middle-class suburbs.

By disguising his true nature behind a wall of literary references, innuendos and euphemisms, Mason skates through the suburbs undetected

A lot of Lolita‘s humour comes from the immense skill of Mason’s performance. His well-polished, Yorkshire-tinged RP accent is perfectly suited to Humbert’s snide asides, constant verbal frustration and Machiavellian cunning. By disguising his true nature behind a wall of literary references, innuendos and euphemisms, Mason skates through the suburbs undetected. True intelligence as opposed to pseudo-intellectualism, suggests Kubrick, is such a foreign concept in these parts that anyone who wields it is treated like royalty.

I can’t help but find this funny. Nor can I help but find Mason’s constant frustration laugh-out-loud hilarious. He plans to commit crimes so repulsive that I won’t mention them, but after his terrible designs are scuppered by an overprotective mother, a clumsy hotel porter, or a trip to summer camp, Mason can only fall into a bitter heap of tears, anger and solitary angst. He bares his teeth and laughs through the pain, finding himself in complete control but also in complete isolation.

The suburbs are Humbert’s plaything, but he loathes them. Loathes them with the fury that only a divorced, middle-aged professor of poetry can muster. Kubrick sees the humour in Humbert’s pathetic failures and milks it for all its worth. The result is a tragicomedy, where we laugh at the diabolically snide scheming just as much as we do at the inevitable pathetic failures.

Lolita’s social satire is delicate, incendiary and exquisite. Sample it for yourself.