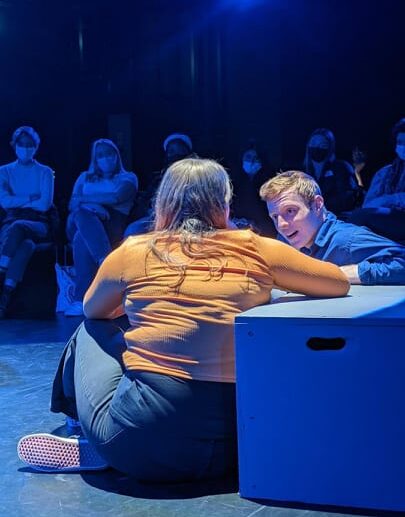 At the start of the year, Warwick Arts Centre announced they would not be able to host any student theatre due to staffing shortages. To many, this felt like yet another painful blow to the arts caused by the pandemic. Warwick University Drama Society’s production of Constellations by Nick Payne was especially badly affected by this, finding out just a week and a half before their play was meant to perform in the Studio space that the Arts Centre could no longer support. Rather than cancelling, the production team delayed their performances while hunting for a new venue. Eventually, they found one – the new studio spaces in the Faculty of Arts Building. This play is the first production performed in the FAB and was an excellent way to christen the new building. If future student productions have even half the commitment, energy, creativity and subtlety of this performance, student theatre at Warwick will thrive for years to come.

Captivating applies to the play at large – despite featuring minimal set, lighting, or sound design, the actors were able to hold the audience’s attention for the entire production

Constellations follows the story of Roland and Marianne’s relationship, charting its highs and lows, exploring their emotions and connections. Well, I say story – maybe ‘stories’ is more appropriate. Marianne, played by Lizzie Hart, is a theoretical physicist who explains that some believe there are multiple universes, in which every possible alternative decision has been taken. This is the core mechanism of the play’s structure: short scenes are repeated several times each time with a small difference, a tiny alteration in tone or gesture that ultimately dramatically changes the outcome of their relationship. Arthur Kemp plays Roland, a beekeeper who meets Marianne at a barbecue. The chemistry between the two actors was beautiful – the subtleties of a relationship’s dynamics were fully explored and deeply resonant.

In particular, the repetition of scenes provides both to flex their acting abilities. Hart’s comedic timing was consistently perfect – making the same joke several times with consistent enthusiasm and varying degrees of success with Roland. Similarly, Kemp’s ability to instantly transition in one scene from frustration to flirtation was commendable. Between scenes, emotions oscillated dramatically: sometimes an admission of cheating was met with sympathetic understanding, sometimes pure rage. Maintaining intensity, commitment and focus through these transitions was no easy task, but the performers were consistently successful. A particularly beautiful scene took place entirely in American Sign Language (British Sign Language was not possible due to complications caused by Covid-19). While I don’t speak ASL and so can’t comment as to its accuracy, their use of facial expressions and small nuances in a gesture to express their emotions was utterly captivating. Captivating applies to the play at large – despite featuring minimal set, lighting, or sound design, the actors were able to hold the audience’s attention for the entire production.

Despite all the uncertainty from Covid-19, the tireless efforts of this cast and crew meant that in our universe we could enjoy and share in such a committed and meaningful performance

Having given such stunning performances, it would be easy to focus entirely on applauding the actors’ efforts. However, behind every great performance is a great production team. This play marked Em James’ directorial debut at Warwick and demonstrated maturity and subtlety of touch that perfectly compliments the source material. As the play was staged in the round, the scenery was minimal but well-utilised. Additionally, each scene was blocked in such a way that each section of the audience was able to focus on either Hart or Kemp’s performances. The rest of the crew deserve praise too: the lighting and sound design integrated seamlessly with the performances. The marketing and publicity were of a very high standard – seeing student theatre being promoted on the Piazza’s big screen was particularly heart-warming. Finally, co-producers Izzy Hayman and Cat Heald deserve huge credit for completing the mammoth task of organising new venues and performance dates at the last minute – there were 4 venue changes before ultimately finding the FAB studio.

If we accept the premise of this play, there are multiple universes in which every possible decision is taken. That means there could be a universe that missed out on this delicate, intimate, beautiful exploration of life, love, and death. Despite all the uncertainty from Covid-19, the tireless efforts of this cast and crew meant that in our universe we could enjoy and share in such a committed and meaningful performance. I’m very grateful we’re in this universe.