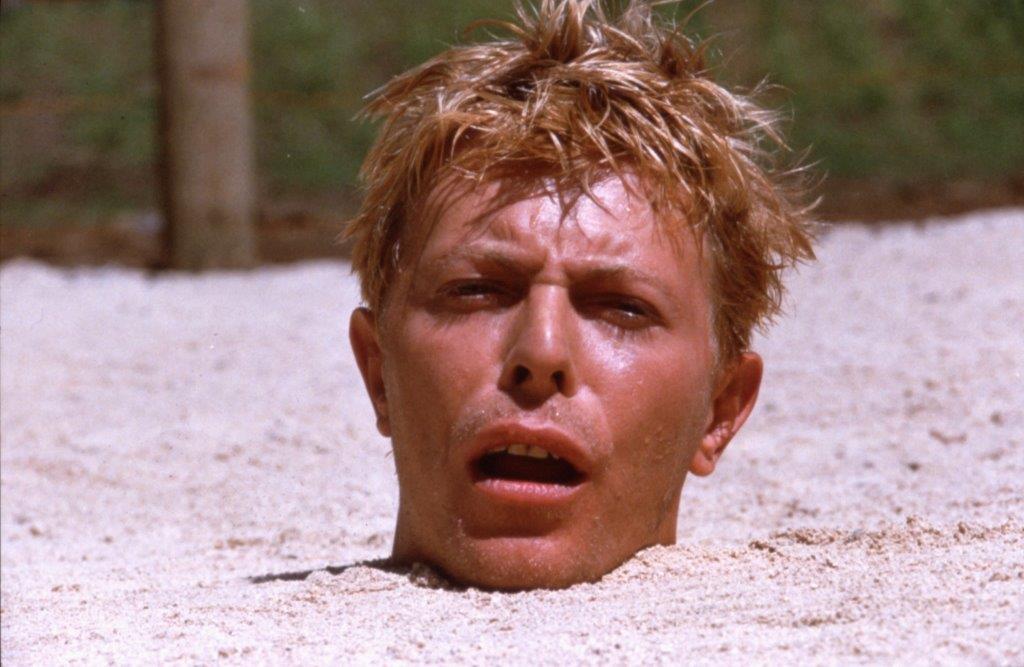 The answer is yes and you’re lying to yourself if you think otherwise. The movie is called Merry Christmas, Mr Lawrence and it’s easily one of the strongest films that I’ve watched over the festive period. The movie’s titular character isn’t played by Bowie – instead, the role is filled by the Scottish actor Tom Conti. Lawrence is the film’s most sympathetic character. He’s a decent, kind, upper crust British officer with a love and fascination for Japanese culture. We quickly learn that he’s the peacemaker of the prison camp, acting as a translator and mediating the relationship between the Japanese guards and the allied prisoners.

Translation is the film’s central theme. The difficulty that men find in communicating to each other is only exacerbated by the barriers of language, race, culture and the thick, ever-present wall of homophobia. Each serves to prevent the development of closer relations between the captives and their guards. They could be friends, they could be lovers, they could be allies, but for everything that stands between them. It is David Bowie’s character who is determined to prod and poke at these walls and barriers, exposing the madness and inhumanity of the social constructs separating the men from each other and perpetuating the system of institutionalised violence and hatred.

We follow Lawrence as he builds curious near-friendships with the Japanese guards and observes the deepening (perhaps mutual) attraction that camp commandant Yonoi feels for the indomitable paratrooper prisoner Major Celliers (Bowie). Any movie about the relationship between the British and Japanese officer class will inevitably draw comparison to David Lean’s magnificent drama The Bridge on the River Kwai, but the key difference is that Kwai was directed by a Brit. Merry Christmas, Mr Lawrence was directed by the controversial and lauded Japanese auteur Nagisa Oshima, perhaps best known for his sexually explicit and politically incendiary movie In the Realm of the Senses.

Where Lean focused on the dual madness of the upper classes and the reckless stupidity of the codes of duty, Oshima focuses on the loneliness and repressed sexual neurotics affecting each and every soldier in their shared tropical prison. Structurally, Oshima’s movie is more like a buffet than a three course meal. Events sometimes happen only to be explained to the viewer later in the narrative. The course of events unfolds episodically and unpredictably, making the viewing experience slightly jarring but always compelling. The reason for this structure is that Oshima wants the movie’s subtext, politics and thematic content to take precedence before its narrative.

Sometimes, a movie’s flaws and imperfections can only serve to make it all the more endearing

A lesser filmmaker would fail in such an attempt, but Oshima is no lesser filmmaker. His beautiful visual compositions, effective pacing and flair for dramatic set-pieces allow the imagery, politics and strange sensuality of Merry Christmas, Mr Lawrence to soak into the skin of all who see it. When remembering the movie, I feel it and taste it before I recall the details of the story. The critic Amy Nicholson, when discussing John Ford’s iconic western The Searchers, says that you can fall for a movie because “its your misshapen little monster” and you can see the beauty in it.

I wouldn’t describe Merry Christmas, Mr Lawrence as a monster or misshapen, but I like Nicholson’s quote because, sometimes, a movie’s flaws and imperfections can only serve to make it all the more endearing. Perfection and flawlessness are always impressive but can be dull and lack character. For this writer, brilliantly evocative, quirky, sprawling messiness is almost always preferable. It sticks with me.

Oshima’s movie is full of endearing imperfections. Is Bowie’s character supposed to be British or Australian? How are we supposed to feel about Takeshi Kitano’s Sergeant Hara? Did Celliers care for Yonoi or did he just want to exploit the commandant’s crush? I cannot answer any of these questions but I’m glad that they’re there to be asked.

They give the film its strange character, its charm and its lasting memorability. I haven’t stopped thinking about Oshima’s film since it ended. A neater, more polished movie may have been a more immediately satisfying watch but it wouldn’t have seeped into my thoughts and dreams in the same way that this story of sensual, tropical imprisonment has.

Oshima ends his film with a brilliantly impressive sequence. The war has ended and two of the story’s central characters are left to pick over the details of their time together. The passion, the humidity, the sweat, the fear, the hunger and the lust are dead. Only the memory of it remains, and memories can be tricky. Oshima stages this cold, honest scene in a room made of stone at night-time. The staging cues us in to the subtext. The heat is gone and the day is done.

What are we to make of their time together? Did it change them? Shape them? Reveal something about them? Sometimes a simple phrase can bear the weight of years of memory: Merry Christmas, Mr Lawrence!