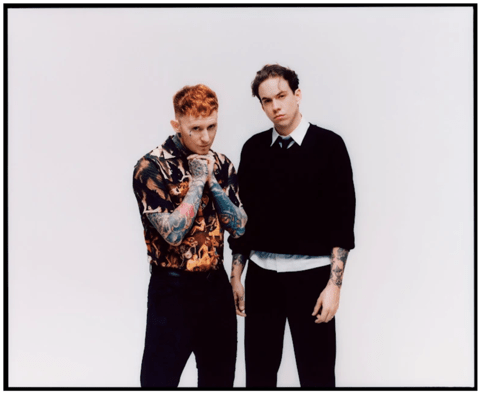 Frank Carter and the Rattlesnakes are one of those bands whose recorded music just doesn’t do them justice – songs like ‘Lullaby’ are meant to be roared in front of teeming crowds. This band is a prime example of the fact that punk rock is a genre built as much on performance as it is on sound. But their gigs aren’t all about making lots of harsh noise or getting crushed by strangers in a mosh-pit – although there was a fair bit of that in Birmingham’s O2 Academy.

Carter is an artist who comes into his own on stage. It’s where he belongs, and this show was proof of that. Despite having a fractured elbow (surely an injury sustained during a previous night of tour) his energy wasn’t curtailed or re-directed. It didn’t stop him crowd surfing either: “I fractured my fucking elbow, but I didn’t fracture my fucking vocal cords, the show must go on!”.

To attend a Rattlesnakes gig is something more than just an audio-visual experience. Carter gets the audience involved, and nothing is off-limits. In verbal terms we were the foils to his ad-libs, the source of jokes and material that he could comment upon and, yes, swear at. On a more physical level we were the shock absorbers for both the Rattlesnakes’ sound and Carter’s crowd surfing attempts.

Speaking of absorbing shock, even though only a small proportion of the audience actually took part it would be a mistake not to mention the moshing, a characteristic element of this band’s gigs. Presiding over such throngs is one result of the music that many artists are often proud of. They encourage it in the kind of way I might ask a seminar group if they have any questions after a presentation; asking for something you shouldn’t really have to ask for.

In recognition of the danger mosh pits can hold, especially for women, it is a tradition at FC&TR gigs to start a female-and-non-binary only mosh pit when ‘Wild Flowers’ is played,  enforced by Frank Carter himself. For one gentleman who ended up somewhere he was not supposed to be, the telling off from Carter – “This is not your moment, this is not your fucking song” – probably won’t be forgotten anytime soon, and it’s good to know he sticks to his word.

It sets a positive standard, although if one mosh pit is for women the others are still predominantly for men. Really, it is an attempt at mitigation and nothing more. Carter’s own involvement in the pits, pointing out people who should be taken out or trying to get involved himself, felt like an over-extension of his responsibilities and distracted from why most of us were there. That is his stage persona, though, and perhaps he is the best-placed person to ensure the audience are safely enjoying themselves.

[When they play] live they are enthusiastic and humble, some way off from the kind of rockers who just look like they are going through the motions

Despite his roguish side, Carter’s antics gave the gig a communal feeling. This energy was only upgraded by the audience’s collective joy of seeing the band live, screaming their songs in unison. Tracks from their most recent album, Sticky, such as ‘Cupid’s Arrow’, ‘My Town’ or ‘Go Get A Tattoo’ were belted out for our listening pleasure, but it was evident the band were also enjoying themselves – it didn’t feel like just another night on tour. For ‘Devil Inside Me’ a man from the audience was invited onstage to sing alongside Frank, and did a good job too. For ‘Off With His Head’ support act Cassyette temporarily joined the gang, hinting at a sonic dexterity the monolithic Rattlesnakes are still capable of.

If anything, though, it was the second support act Lynks who made the night memorable. With their sexual and electric display of sharply hilarious songs, and dressed in what can only be described as a gimp suit, they were comedically juxtaposed with Frank Carter’s more traditional brand of rocker masculinity. But onstage together, singing ‘Bang Bang’ and ‘Go Get A Tattoo’, the two gelled gloriously.

Sometimes they were a bit too unprofessional, though. A proclivity toward micromanaging the audience, not always singing the full lyrics to songs, and dragging out the end with gushing thank-yous tells of a band with personality and self-awareness, although it can get tiring. For big gigs though, it can be just the kind of energy that makes for a landmark set, and, after all, they are rubbing up against some intimidating sounds.

Frank Carter and his Rattlesnakes might be a way off from headlining Reading but, undoubtedly, it is on their trajectory. Although they might initially appear to have the airs and graces you would expect from such an established band, live they are enthusiastic and humble, some way off from the kind of rockers who just look like they are going through the motions.