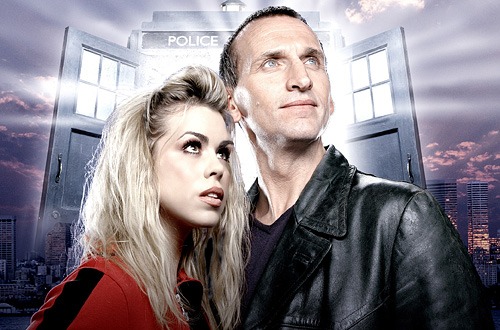 For whatever reason, Doctor Who just never appealed to me. I love science-fiction, worship schlock (trashy/pulpy films and TV) and recently discovered the genius of Russell T. Davies after crying my way through It’s a Sin earlier this year. Yet either due to its length, its silliness, or my own personal pettiness, I had never watched a single episode of Britain’s best-loved Sci-Fi show … until now!

After years of refusal, I finally caved and watched series one of “NuWho” without an ounce of nostalgia in my eye. The ensuing experience was as wildly inconsistent as it was perpetually the same, constantly reinventing itself in tone, setting and quality but never straying far enough away from the characters themselves to risk being jarring or disloyal. Everything from Dickensian ghost stories (‘The Unquiet Dead’) to ‘The End of the World’ is tackled in just the first three episodes, but it crucially doesn’t feel like a Frankenstein’s monster mash-up of genres. Watching the legitimately horrifying ‘Empty Child’ immediately after finishing the gut-wrenching ‘Father’s Day’ sounds jarring on paper, but both have the Whovian spark that makes the differences in style and genre seem inconsequential.

Billie Piper’s Rose is the anchor that quite literally grounds the show through its often unwieldy wackiness (see the farting politicians in ‘Aliens of London’) with her down-to-earth humanity and compassion. She is the heart and soul of an already stacked cast, regrettably reduced to a glorified deus-ex-machina during the disappointing series finale (‘The Parting of the Ways’) but otherwise provides an indispensable, nuanced reminder of humanity that grounds the show in its most elaborate moments. Frankly, every character within series one is unforgettable for one reason or another, whether that be John Barrowman’s suave Captain Jack or Penelope Wilton’s iconic MP Harriet Jones or, regrettably, a very uncomfortable turn from Noel Clarke as Rose’s irritating boyfriend Mickey, who is best forgotten for both his crimes against characterisation and, well, humanity.

Blissfully, the show is far too fun to dwell on its more dated elements, and central to everything is Christopher Eccleston’s electrifying run as the titular Doctor Who (he is credited as such in the first episode!). Just from the word “Run!” in his opening scene, he tells you everything you need to know about the character and keeps that infectious energy running rampant until the very bitter end, madcap dashing between the Doctor’s delight and his darkness with absolute sincerity, revelling in the gleeful insanity of the character without losing an ounce of his troubles or past. This single word is especially pertinent for someone like me, because even though I had never seen a slither of the show before in my life, everything about the character clicks in that one moment. There are plenty of other brilliant character moments littered throughout, from Rose’s heartbreaking final farewell to her Dad in ‘Father’s Day’ to the creepy first croak of “Mummy” from the gas-mask child in ‘The Empty Child’ to, frankly, every damn moment Harriet Jones appears on screen. But more so than anything else, the Doctor is the glue that holds Who together.

When [the Doctor] tells you to “Run!”, you just feel compelled to join him for the ride

The show is at its best when the characters take centre-stage, because frankly it struggles everywhere else. The stories themselves are often empty and dissatisfying. The direction is typically flat. The villains, alas, are relentlessly goofy and rarely, if ever, legitimately frightening. Take, in by far my least controversial Whovian opinion, the incredibly frustrating Daleks, a supposedly unstoppable race of super-tanks that may have defined Sci-Fi villainy for entire generations way back in the 1960s (when even Batman was camp!), but don’t hold up to the standards for scary today when they look, in the nicest way possible, like trash cans with plungers sellotaped to their faces. Episode Six, simply entitled ‘Dalek’, is actually brilliant in how it reintroduces the creatures – never quite managing to make them intimidating, but giving them an unprecedented level of tragedy and depth. It perfectly acknowledged the past while dutifully saying goodbye to it, humanising the Doctor’s greatest adversary (even I know that much) to announce a brighter future for the franchise going forward … Unfortunately, an entire army of the blighters get shoehorned into the series finale as the surprise supervillain, completely undermining everything ‘Dalek’ stands for and concluding with an anti-climactic ending that not only rests the entire season’s dramatic opus on unconvincing villains, but resolves them – the aforementioned “deus-ex-machina” – in a deeply dissatisfying way, too. But, uh, hooray for self-destructive fan-service?

It is, however, through ‘Bad Wolf’, the first half of the two-part series finale, that the brilliance of Doctor Who is best exemplified. The concept of the episode revolves around hyper-violent reimaginings of Big Brother and The Weakest Link, set in a dystopian future where victory doesn’t just mean pride – it means survival. The episode is a deliciously silly satire of TV consumption, playful in tone and whimsical in worldbuilding while still producing some all-time gut-punch revelations. The average episode in series one is very rarely this brilliant, but they all have the potential to be, which makes the at-times aggravating inconsistency oddly thrilling. One minute you’re slumming it with a frostbitten Simon Pegg in the rather messy ‘Long Game’ and the next, set in the same place only a hundred years later, a robo-reimagining of Anne Robinson (an “Anne Droid”, no less!) is hunting you down. There is no real rationale for any of it, but when Christopher Eccleston tells you to “Run!”, you just feel compelled to join him for the ride.