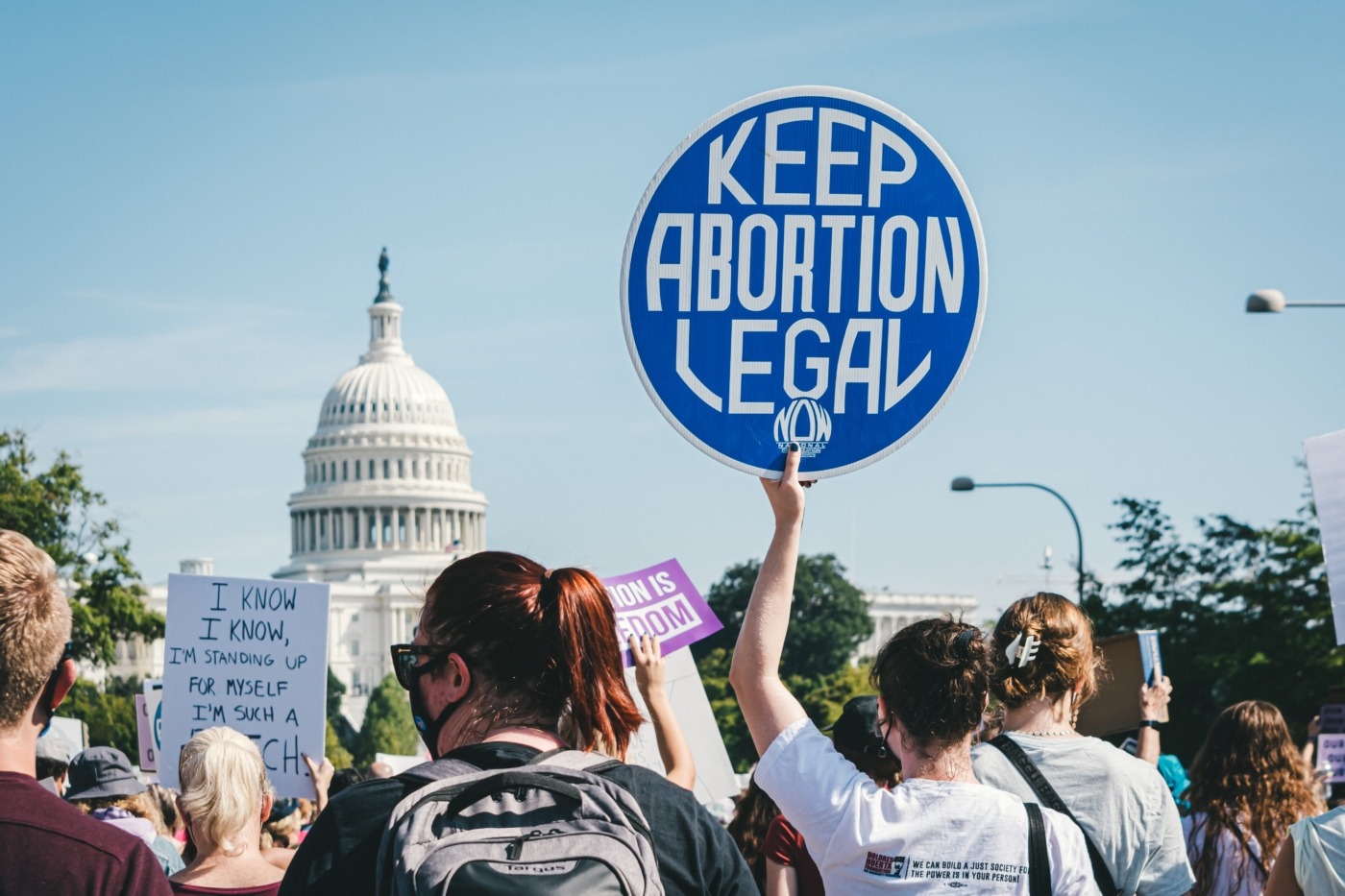 Abortion in the US: Is Roe v. Wade in serious danger?

Dobbs v. Jackson Women’s Health Organisation, a case concerning the Mississippi law which bans most abortions after 15 weeks of pregnancy, has reached the U.S. Supreme Court. The State is arguing that the legislation, which upholds a woman’s right to abortion, is “egregiously wrong” – and that this right has “no basis in text, structure, history or tradition”. Is Roe v. Wade in serious danger?

The right to an abortion was introduced in the United States in a landmark Supreme Court case called Roe v. Wade in 1973. This milestone decision – which was passed by seven-to-two votes – established a woman’s right to abortion, providing a legislative framework for all women in the United States to have access to the resources required to have a safe abortion, without excessive government restriction.

This precedent was later reinforced by Planned Parenthood v. Casey in 1992, which upheld Roe v. Wade and established the “undue burden” standard – ruling that no legislation can place “undue burden” on women seeking abortions. This case also amended the standard for determining a time limit on the legality of abortions, from using ‘trimesters’ to ‘viability’ (the ability of a foetus to survive outside of the womb). In the United States, this is set between 23-24 weeks.

In 2021, the political atmosphere of the United States looks very different. Analysts have been describing the Supreme Court as “the most conservative in modern history” from as early as 2012 – four years before Donald Trump’s appointment of three conservative judges during his presidential term. In this year alone, there have been 600 restrictions on abortion in the U.S., and 90 have been enacted into law. These include requiring women to view ultrasounds 24 hours before their scheduled abortion or enforcing women under the age of 18 to have consent from a parent or guardian before undergoing the procedure.

In Mississippi, there is now one final abortion clinic left, Jackson Women’s Health Organization – which has become the site of both pro-life and pro-choice protests. Both camps view the Court’s upcoming decision as a pivotal moment.

In the state’s brief to the Court, Mississippi Attorney General Lynn Fitch (Republican), wrote: “Roe and Casey are unprincipled decisions that have damaged the democratic process, poisoned our national discourse, plagued the law – and in doing so, harmed this Court.” The Court has limited the question it will consider to whether “all pre-viability prohibitions on elective abortions are unconstitutional.”

The Supreme Court’s most vocal advocate for the right to abortion appears to be its only woman of colour, Justice Sonia Sotomayor

Although Supreme Court decisions are notoriously difficult to predict, a preliminary hearing on 1 December 2021 indicated that the predominantly conservative Court is seriously toying with the possibility of curtailing Roe. Some judges, such as Justice Clarence Thomas, appeared to be concerned by a lack of explicit references to a right to privacy in the constitution, an idea referred to as “textualism.” “If we were talking about the second amendment, I know exactly what we’re talking about. If we’re talking about the fourth amendment, I know what we’re talking about because it’s written. It’s there,” said Thomas. Brett Kavanaugh, the Justice, who was perhaps Donald Trump’s most controversial appointment, simply said that “the constitution is neither pro-life nor pro-choice […] and leaves the issue to the people to resolve in the democratic process.” The Court’s final decision is expected in June 2022.

The Supreme Court’s most vocal advocate for the right to abortion appears to be its only woman of colour, Justice Sonia Sotomayor. In her questioning to the representatives of Mississippi, she questioned how the court could overturn a “watershed” case such as Roe, saying that “the right of a woman to choose, the right to control her own body, has been clearly set since Casey and never challenged. You want us to reject that line of viability and adopt something different.” She went on to argue that to overturn Roe would be to give citizens of the U.S. the impression that the Court’s interpretation of the constitution and subsequent rulings were based on politics. “If people think it is all political… how will the court survive?”

Legal experts and political analysts predict three possible outcomes from the hearing. The Court could prohibit the Mississippi law, upholding Roe v. Wade both in practice and principle; it could rule that the Mississippi law does not place an “undue burden” on women seeking an abortion, undermining Roe in practice but allowing it to stand in principle; or it could overturn Roe v. Wade altogether. The first possible outcome is now considered unlikely, with many pro-choice and liberal campaign groups fearing the worst.

The weakening of Roe could threaten a plethora of constitutional rights, including same-sex marriage, IVF birth control, and even interracial marriage

Pro-choice activists and liberal lawyers are adamant that to uphold the Mississippi law is to place the idea that women have authority over their bodies in grave danger. They argue it would open the door to legal chaos, where various conservative states look for loopholes in which they can make abortion increasingly unattainable for the women in their state. Constitutional scholars claim that the weakening of Roe could threaten a plethora of constitutional rights, including same-sex marriage, IVF birth control, and even interracial marriage – because all of these principles are rooted in the same constitutional right to privacy on which abortion precariously rests.

At the opposite end of the spectrum: Christian, Republican and pro-life organisations insist on the viability of adoption as an alternative option for women with unwanted pregnancies.

At the practical level, if the Supreme Court allows for the Mississippi law to remain in place, almost all abortions after 15 weeks in the state will become illegal. 12 states, including Mississippi, have passed “trigger laws”, which could come into effect immediately if Roe were to be overturned, and would enforce harsh restrictions on abortion.

The reality is that, of the entire U.S. population, those most likely to be affected by an abortion ban are women of a lower socio-economic background, especially minorities. Data suggests that black women make up 34% of abortion patients, despite forming only 13% of the wider population. In a similar vein, white women represent only 39% of those seeking abortions, despite forming 60% of the entire population. Rob McDuff, of the Mississippi Centre for Justice, argues that “people with enough money who can’t get an abortion in Mississippi can travel to another state where the laws are different. But not poor people.” Due to a 1976 law known as the Hyde Amendment, it is illegal for federal funding to go towards abortion, meaning that many women are already required to pay for the procedure themselves.

The Washington Post interviewed a young woman who was a patient at the Jackson clinic earlier this year. The 18-year-old, who decided to remain anonymous, explained that because Mississippi public schools advocate only for abstinence, she did not know how to prevent pregnancy. It would appear that the U.S. system is something of a snare – it simultaneously does not provide the knowledge necessary to prevent pregnancies in the first place, and then is aiming to prevent, or at least make it more difficult, for women to have abortions. And it would seem that this snare is more intent on affecting minorities.

It is undeniable that the right to abortion has become one of the controversial and divisive issues in 21st-century America. Whilst the entire country holds its breath in wait of the ruling, it is becoming increasingly clear that this decision, in the hands of the most senior lawyers in the country, will affect the United States’ marginalised citizens the most.