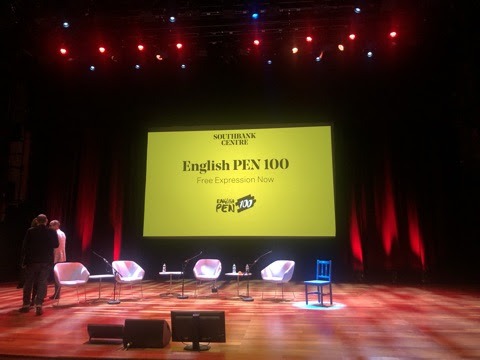 Soundbite Culture: Why it felt more important than ever to the freedom of expression in person.

English PEN’s charter states that ‘literature knows no frontiers’. At the Southbank’s closing event celebrating the organisation’s centenary, this statement had never rung truer: between the softly spoken, yet astute observations of Elif Shafak, the prose of Tsitsi Dangaremba delivered by Bridgerton’s Adjoa Andoh, and the hilarious but poignant running commentary by Ngugi Wa Thiong’o via Zoom.

Founded in 1921, English PEN is one of the world’s oldest human rights organisations,  campaigning for writers’ freedom of expression. To celebrate a centenary of human rights progress, Southbank Centre hosted English PEN 100 and gathered both renowned and emerging writers, readers, and activists for timely debates and discussions.

“We must start to view literature as one language, and translation as the ultimate language of all languages.”

Noted human rights lawyer and president of English Pen, Phillipe Sands, joined  Zimbabwean author Tsitsi Dangarembga, Turkish novelist/essayist Elif Shafak, and Kenyan writer/academic Ngũgĩ wa Thiong’o, to discuss freedom of expression and writing around the world. If given the chance, I don’t think I could have chosen a more well-suited panel of writers. These writers, some of whom have been imprisoned and exiled for their work, called on us to imagine advocating for freedom. In what Elif Shafak defines as ‘an age of division’, we must start to view literature as one language, and translation as the ultimate language of all languages. Despite PEN’s size, it is mighty in its aspirations and support. I was lucky enough to speak with the Chair of English PEN, and Professor on the Warwick Writing Programme, Maureen Freely, about the organisation’s primary mission in advocating for human rights.

Freely told The Boar: “English PEN is where freedom of expression and literature meet. They are intertwined everywhere.” The organisation is primarily focused on human rights, but Freely admitted that the organisation is unique in that, “we’re all writers who want to help other writers. We’re interested in their work as well as their problems.”

These remarks are layered too, for throughout the pandemic and the rapid progression of online platforms we have all become writers to an extent. Even in drafting that email to your personal tutor, you are creating something, putting it on a platform, and telling a story (albeit a rather short, mundane one). It seems that PEN’s campaign has become even more relevant since its founding; the laws of the internet have rendered its mission applicable to us all.

These writers grieved how the lack of context in discourse and debate today functions to adversely simplify information, especially throughout this pandemic.

After a year of zoom seminars, streamed lectures, and stilted break-out room discussions, sitting in the newly restored and environmentally improved Queen Elizabeth Hall, amongst equally keen audience members, was refreshing. Instead of watching 20 minutes of a live stream or a heavily edited, highlight on Twitter, the audience were fortunate enough to access over 2 hours of compelling discourse. That’s the problem with our ‘soundbite culture’ of a new media age, a term that elicited a collective bemoaning from the panel and the audience alike, as these writers grieved how the lack of context in discourse and debate today functions to adversely simplify information, especially throughout this pandemic.

Leaving the auditorium, energised by the tangible enthusiasm of these writers I admire, I reached out to Professor Maureen Freely to gauge the future of hybrid arts events in the next few years. She emphasised that like so many political and social issues, this question of online vs in-person was “a creative challenge even before the pandemic”, that Covid-19 has merely accelerated the natural processes of culture change, to demand more from us as a society. Yet with more accessibility comes greater scrutiny. The organisation had to become more compliant and Freely noted that writers were more at risk in opening themselves up to greater surveillance, “Private companies worry me a lot more than the state” she adds.

It’s about creating space, writing, sharing ideas, and the potential of the virtual and online facilitates this creation seamlessly.

Despite these concerns, Freely agrees that hybrid events, like those at the Southbank, are the way forward, “I think that’s the next step, is to do hybrid in a way that doesn’t feel really weird.”  One of the fundamental beliefs that I personally admire about PEN, a network where people can pass ideas back and forth, and none of us completely own anything. It’s about creating space, writing, sharing ideas, and the potential of the virtual and online facilitates this creation seamlessly.

So, what can we as students, as lovers of literature, or advocates for human rights do to help? “I think the next chapter is finding better ways to engage with emerging writers and readers. I’d like to see a lot more in universities, both in student societies but also in writing programmes and literature departments, it’s about involving our people in these conversations”, Freely answers. English PEN no longer requires any interested parties to, it’s accessible to anyone interested in their work. So if protecting freedom of expression and supporting writers around the world facing persecution piques your interest at all, I urge you to join and become a concessionary member of English PEN today.

I know many of us, myself included, concurrently sigh, and roll our eyes at the new, reductive mantra of a soundbite culture to “normalise this” and “normalise that”, but I truly wish to ‘normalise’ as it were, these new hybrid forms of cultural, arts events. To combine the material (and intellectually substantial) atmosphere of an in-person discussion, with the accessible and limitless potential of online platforms and spaces.