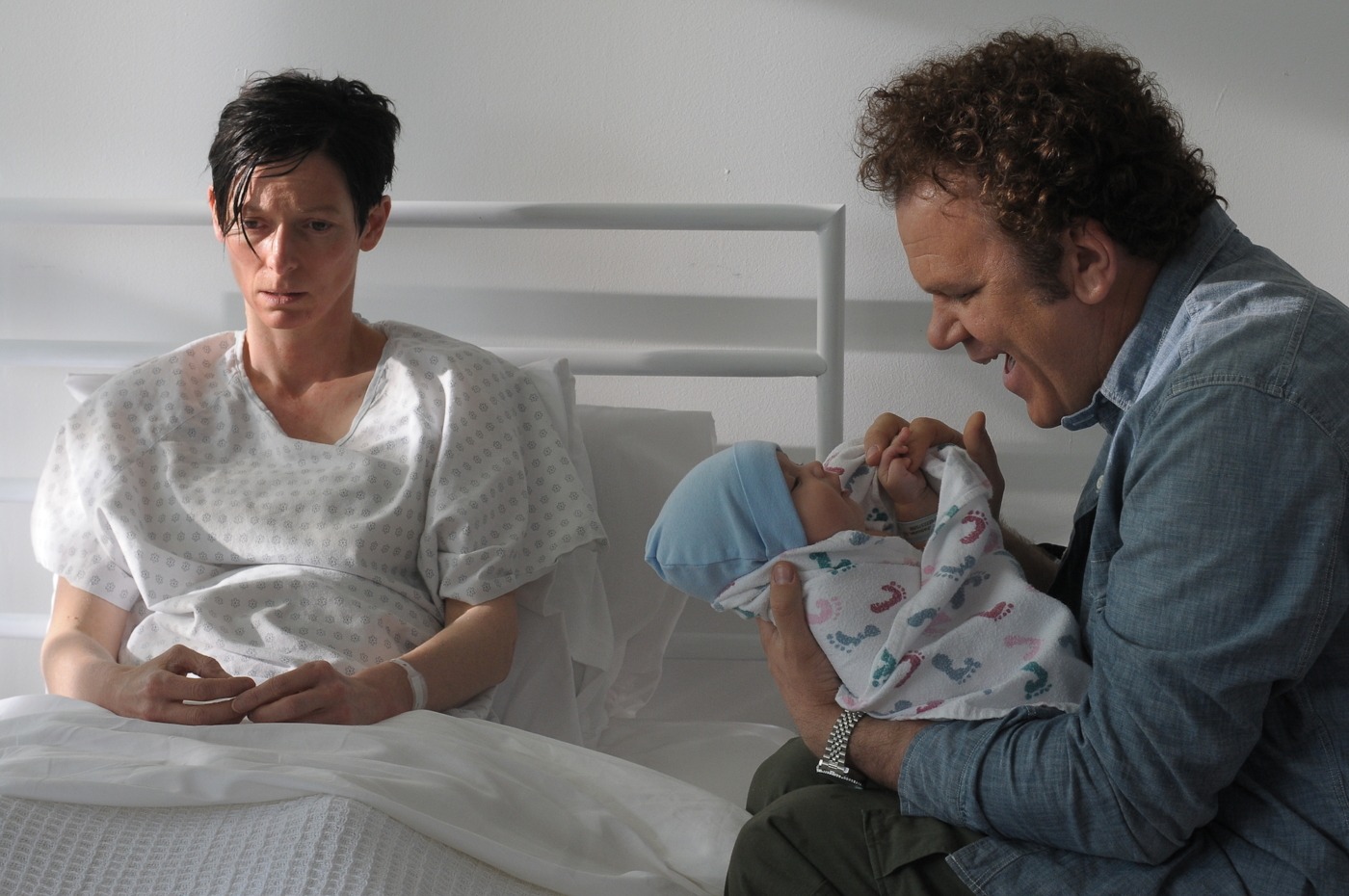 Last week I watched Lynne Ramsay’s film We Need to Talk About Kevin. I chose the film because it wasn’t very long and the description seemed just interesting enough to kill some time. However, the film definitely exceeded my expectations and pushed me to question my understanding of parental relationships and responsibility.

The film is from Eva Khatchadourian’s (Tilda Swinton) perspective as she looks back on her life after a traumatic incident involving her son Kevin (Ezra Miller). In the present, she is living alone in a small, vandalised house and looking for a job. But, as the story unfolds in the form of a sporadic and drunken reminiscence of what led to her current life, we find out that her son became a school shooter who also murdered his father and sister.

In the film, Eva is constantly paying for the crimes of her son. Her house has been covered in red paint (presumably to make her feel guilty for Kevin’s crimes) and she is shunned by almost everyone she meets. This is on top of the psychological strain of dealing with what happened. This leads her to question whether or not she deserves what is happening to her – as do we.

we can hardly tell whether she feels anything at all

Looking back on Eva’s life, she never seemed thrilled with the birth of her child. In the scene in which she tells her boyfriend, Franklin, that she is pregnant he seems happier than her (we can hardly tell whether she feels anything at all). Even once Kevin is born, she feels indifferent to the baby, being unable to stop him from crying when Franklin does it easily. Throughout Kevin’s life, she has felt disconnected and sometimes even targeted by him. In this sense, we are inclined to absolve Eva of the blame and may even feel slightly persuaded to think that Kevin was simply born that way.

However, given that the film is from Eva’s perspective, we also need to read between the lines. She is not entirely innocent in the faulty relationship between her and her son. The moments in which it seems that Kevin was targeting her could also be seen as typical childish behaviour that she took personally. For example, the scene in which Kevin purposefully defecates in a nappy when his mother is trying to potty train him causing Eva to lash out and violently push him to the ground. In this moment, Eva sees her son as being malicious, but realistically, all children are malicious and tease sometimes. It is the parents’ job to be patient and set a good moral example for their children, which she failed to do. Moments like these show Eva as an unreliable narrator – making the film all the more thought-provoking.

The question of responsibility is made more complex by the chilling moments of similarity between the mother and son, from the way that they fiddle with food to their facial expressions. Their personalities also share some similarities – while Eva tends to see Kevin as being hateful and cruel, I would argue that they share the same coldness. There are few moments in the film in which Eva shows empathy or warmth towards her family or others. The times when she seems happiest are when she fantasises about being abroad.

Was he born this way as Eva seems to believe? Or was it her lack of warmth as a mother that caused this?

Her entire personality indicates that she is adventurous and independent, but caged into the life of a mother. This inevitably would impact her child, leaving him feeling that she would rather be somewhere else than at home, caring for him. Hence, he is resentful towards her but also craves her validation (this may be why she is the only family member to survive the day of the shooting). We are encouraged to question why they are so similar, leading to the classic argument of nature vs nurture. Was he born this way as Eva seems to believe? Or was it her lack of warmth as a mother that caused this? And even if he did inherit her cold personality, why did it result in him being such a horrid criminal when she is nothing of the sort? Did she really create a criminal just because of her not-so-sunny personality?

Of course, the film presents no answer to these questions. There are a million elements of Kevin’s upbringing that could be used to understand his actions, it is up to the viewer to decide how to take it.

However, I will say that the film does an excellent job of presenting the many aspects of raising a child. The way that each moment and all the smallest interactions are presented to us to show how they can all contribute to who the child grows up to be is both anxiety-inducing and brilliant. The mix of present-day, past and fantasy illustrates Eva’s traumatised state well. There was not much dialogue overall which, to me, adds to the brilliance of the film as it is more about what’s left unsaid. This would not have been executed as well as it was if not for the entrancing performance by Tilda Swinton. Overall, the film was very provocative and definitely a worthwhile watch.