This year’s Labour Party Conference is best kept for the Twitter feed, rather than the history books. Keir Starmer continues to struggle with establishing his image amongst voter subgroups, despite the release of his pamphlet with the Fabian Society. While the speculated word count varies depending on who you ask, the general consensus about the essay tends to lean towards one descriptive adjective – ‘underwhelming’. Brighton weather was typically chaotic, fluctuating between a Kansas-style windstorm and a glaze of seafront heat. The yellow brick road to No.10 isn’t so accessible for Starmer, as recent YouGov polls demonstrate that he’s still lagging behind in popularity polls. I’m here to provide a first-person recount of what actually happened at the conference, whilst drawing comparisons against the Conservative Party Conference.

Events at the main Labour conference mainly took place if there were sponsors backing each event, which either led to something bland in substance or too commercially focused

The scandals at the Labour conference, of which there were few, revolved around Angela Raynor labelling Johnson as ‘scum’ (fair game), and also something I’ve been calling ‘cervixgate’, where Starmer was trying to navigate between the camps of the LGBTQ+ and LGB communities, but was instead eaten by the bears (the mass media) waiting in the shadows. While neither of these issues are particularly gossip worthy, it is still important to note that both issues have revolved around the discussion or reprimand of women and the feminine existence. The same could also be seen at the Conservative conference, with justice secretary Dominic Raab stating that “insults and misogyny is absolutely wrong whether it’s a man against a woman or a woman against a man”. This comment fundamentally misses the point behind the meaning of the term. It explains why the Tories are absolutely dreadful with handling soaring rates of violence against women and other misogynistic hate.

While the Labour party was hosting its own conference, there was a raucous down the road, inside The World Transformed (TWT) fringe tents. Every year, they are often mocked by the New Labour centralists predominantly present at the main conference hall. In reality, TWT touched upon some really important economic policy topics, with domestic and international considerations taken into account. They didn’t just hold events in relation to the Western world like other conference events – there were discussions surrounding the Cuban blockade crisis, as well as the Palestinian struggle and apartheid. Events at the main Labour conference mainly took place if there were sponsors backing each event, which either led to something bland in substance or too commercially focused; both inevitably resulted in regular people becoming uninvested and disconnected, reflecting the general problem with modern politics today.

The main hall was recognisably quiet, most likely as a result of pandemic restrictions and a hefty amount of fringe events happening in a short span of time. When I did get some free time, I was able to observe an Owen Jones debate live in the main hall. He was speaking with Cambridge Union President, Joel Rosen, and it got particularly heated. The debate was rather haphazardly strung together but I can imagine it is likely to be YouTube gold by the time it’s made live online. I encountered Jones again at the final TWT party of the conference, where he definitely pretended to recognise me, and I think for him this was just an automatic knee-jerk response whilst in the haze of meeting hundreds of new people everyday.

Delegates were busy in the main hall for composite motion speeches and voting – there were some pretty interesting motions that succeeded, including advocacy of public ownership of the Royal Mail and BT broadband infrastructure. There was also a motion surrounding further funding for social housing, and a repeal of anti-squatting legislation. Contrasting Starmer’s takes, there was a successful motion through card vote to oppose the AUKUS nuclear agreement and another to advocate for the £15 minimum wage. The Fire and Rehire campaign was also successful with delegates – I was actually able to congratulate Barry Gardiner MP on the success of his campaign in person, admittedly whilst a few drinks deep, and he cut in front of me in the queue! As well as the usual conference nonsense, there were receptions taking place every night, with The Mirror upholding its notorious reputation of hosting boozy political chats and questionable late night spectacles. The annual LabourList karaoke night was also underway, with young members awkwardly side-stepping whilst every classic anthem was totally butchered on the mic.

Ultimately, it was a nice welcoming return to normality in a post-lockdown world. My key takeaways from the conference are quite basic, and the same stance can also be seen in the public polls – the conference has done little to boost Starmer’s popularity amongst Labour and also general voters. Whilst Keir’s speech was preferable to Johnson’s, this is not a particularly difficult feat to reach considering how many microaggressions were scattered throughout Johnson’s partially deluded monologue – and that’s not to mention the beaver-talk. A lot more will have to be done to reclaim the party from the Corbyn era, a brief epoch they are trying hard to forget but are simultaneously reluctant to stop talking about.

Labour lead the polls: midterm blues or a government-in-waiting? 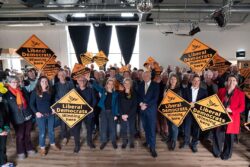 Lib Dems win Chesham and Amersham: another brick in the wall?