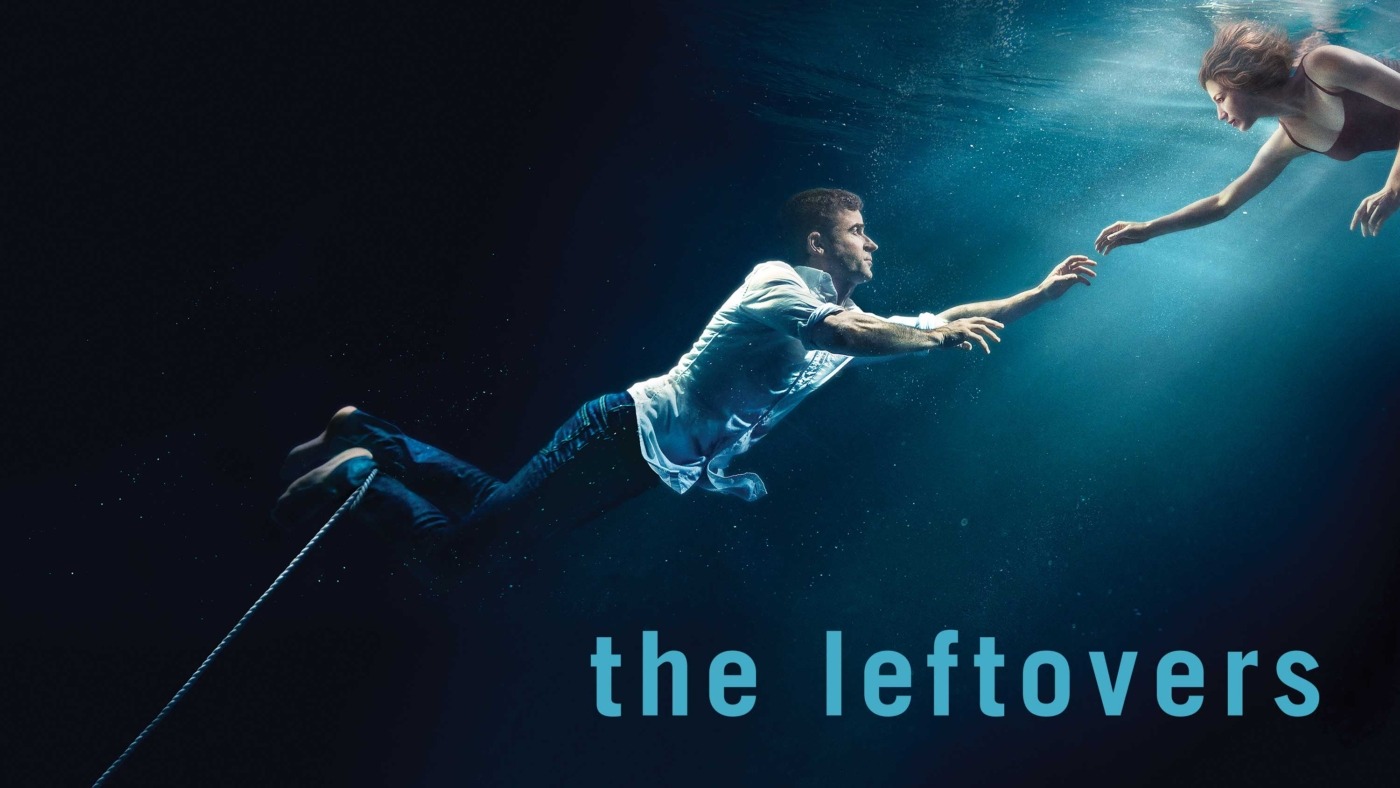 TV buffs much more knowledgeable than I (not implying that I’m saying I’m one of these) often talk of the role of The Wire in transforming narrative scope of Television, the criticality of Breaking Bad in defining the current golden age of television and the trajectory of a protagonist’s journey, or the role of The Sopranos in enabling what TV is today. What I will be proposing is why we should we add The Leftovers to this discussion for the depth of its exploration into human suffering.

But essentially, it could all be boiled down to this: The Leftovers is where it’s AT.

The focal point of the show happens through Mapleton’s police chief, Kevin Garvey (Justin Theroux – whose eyebrows have enough charisma to start a spin off that could rival Better Caul Saul), the isolated and grieving Nora Durst (Carrie Coon), and her brother, Reverend Matt Jamison (Christopher Eccleston).

One of my critic heroes, Brian Tallerico, described the process of reviewing this show as like “trying to hold water”. In other words, I should be fine…

Okay, so… an event takes place – an event that takes the secularised Western society by the boots and says, “time’s up buddy!” The series asks us whether something can occur that confutes the way in which humanity essentially views life – that is primarily through the prism of science and (or) religion. Damon Lindelof (the series’ creator) subsequently conjures a world that descends into nihilistic chaos as the basic 21st century human’s insatiable need for “an answer” gets rejected utterly.

The show spans three seasons and focuses on the key struggles that occur following this event (but often in continuity to what came before it). However, these struggles are undermined by the memory that 2% of its population are missing. Not a whodunnit missing, but a scientifically inexplicable missing…

One consequence is the creation and rise of a global cult (The Guilty Remnant), portrayed centrally through the captivatingly pained Amy Brenneman and Ann Dowd’s haunting presence (that will certainly linger long hereafter in the viewers’ mind). It attempts to recruit those who claim to exist as “Living Reminders”, communicating using notes and refraining from speaking, and target those feeling a personalised version of the universal despair that comes with the territory of having a beloved one vanish into thin air. I should also mention that the cult is led by Peep Show’s Paterson Joseph, who also happens to believe himself to be the Second Coming of Jesus Christ. Despite the aforementioned credit and how his character’s description should evoke a degree of irony or humour, his performance is antsy and completely terrifying. This is the arc of the first and more serious morbidly-toned season one.

What’s perhaps more enthralling is the exploration of the relationship between pre- and post- ‘disappearance’ life. One such fascinating case is how the loss of a mother to explicable reasons (a sudden heart attack) a day prior to the entire world losing someone inexplicably can be subdued. The ramifications of such grief delegitimisation – as seen via Liv Taylor – are unsettling and irrevocable.

The show’s ability to reinvent itself is, on the face it, a characteristic of a great TV show. But it does so conceptually within a broader scope. The movement occurs from international cults to the widespread belief that Justin Theroux’s character is the Messiah – the conduit between the living and spiritual world, with science fiction that pushes what Lindelof didn’t even reach in his more known (and less brave) Lost series. The show’s tendency to morph and grow its topic in terms of gravity is what transcends The Leftovers above regular ‘great’ television series.

How the series depicts the reinvention of paranoia and grief within its characters contributes hugely in making The Leftovers such compelling viewing. It’s the stellar performances that tie together.  I should also note that Carrie Coon’s unpredictable performance weaves together elements of fearlessness, weirdness, and ultimately layers of complexity that easily making her one of the most brilliant female characters of television.

While it’s hard to define the significance of a show (and I am certainly not qualified to so) in conceptual terms, the way in which the series deals with an entire world shift from a particular event seems increasingly poignant and relevant. The depth of psychological investigation through Kevin Garvey are pushed further than I have witnessed in the entire visual medium I have watched.

Now that I can exhale again having excitedly (often falling into the frantic-ravings-of-a-passionate-maniac territory, let’s face it!) telling you all about my favourite show I will finally add this: I highly recommend The Leftovers.