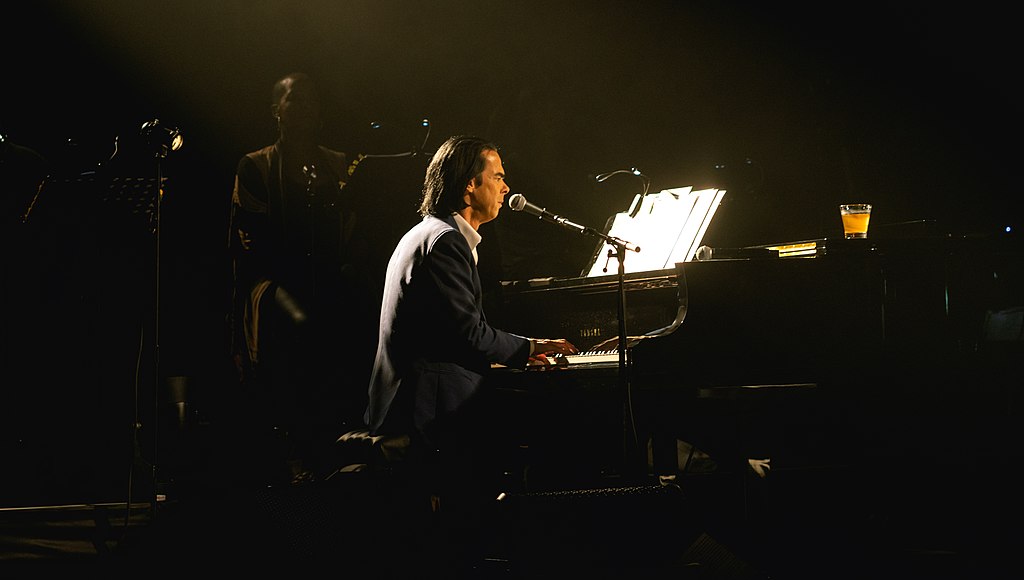 A few years ago now, I read a review of a Nick Cave & the Bad Seeds gig. What I read seemed to be a description of the perfect gig. Intimacy abounded, Cave standing tall on the stage surrounded by a sea of emotional and adoring fans. His booming baritone vocals provided the only point of reference within what would otherwise be a discombobulating environment. After seeing him live myself, I completely understand.

That review might have been the most important piece of music journalism I’ve ever read. It fired my imagination and inspired what was then only a fleeting interest in Cave and his band. But of course, such descriptions of Cave in print can only go so far. Even if you are familiar with his works, they mean little until you see him live for yourself.

And let me tell you, seeing him live really is something else. Despite being sat on the very highest level inside the Aylesbury Waterside Theatre – about as far away from Cave as I could have been in that cavernous room – I felt every bit as part of the experience as those sat at the front.

Cave really does cut a larger-than-life figure, by no means looking his 63 years. Decked out in his classic garments, a close-fitting black suit matching the shade of his hair, and bestriding the stage, he couldn’t have contrasted more with Warren Ellis. Ellis is a man who is often forgotten as the endearing Merlin-figure to Cave’s darker brand of magic, yet is perhaps the most essential member of the Bad Seeds. Confined to one side of the stage and nestled amongst his instruments – synth, violin, guitar, and his ethereal tones – Ellis drew the eye as much as Cave himself, though the two of them couldn’t be any more different. Ellis provided the control variable on the set, the stability and rhythm to Cave’s restless movements from piano to the lip of the stage, to his stall and over again.

Part of the joy of this gig was just watching Cave and Ellis doing what they clearly love and do best. We were treated not only to songs from Cave and Ellis’s 2021 album, Carnage, but to many of the ballads from the Bad Seeds’ 2019 album, Ghosteen. Cave has always been an artist who is hard to pin down in terms of sound, and Ghosteen was no different. As an album it may be looked back upon as the first of an older and more mature Cave. It never got a chance to tour upon its initial release due to Covid, but thankfully Cave and Ellis are treating audiences to it now.

Cave still possesses the wit, presence, and ability to perform well, but he also has the discography and history to be able to entrance and fulfil every desire of his audience even if not every fan favourite or hit is played

In Ghosteen, the narrative songwriting continued but now the use of electronic effects, sparser soundscapes and more spiritualistic themes marks Cave et al out as one of the few artists capable of allowing their sound to grow by continually stretching their own musical boundaries. Of course, the personal trauma experienced by Nick Cave in recent years may also have prodded him sharply along such a path.

Live, Ghosteen’s tracks clashed gloriously with those from Carnage. The harsh beats of ‘White Elephant’ or ‘Hand of God’ from Carnage and the haunting bliss of the ethereal ‘Spinning Song’ and ‘White Horses’ from Ghosteen made for a set that demonstrates the breadth and ferocity of this newer Cave sound. His own vocals were the gig’s defining feature. Cave can still gracefully go between more melodic and occasionally strained singing and that thundering spoken word he is so well known for. Alongside his excellent backing singers and Ellis’s own ghostly falsetto, Cave found the perfect balance and was able to sweep the audience away with it, maybe even to tears.

It is no small feat for an artist of Cave’s age and esteem to be able to play new music to an audience and leave them contented – most people just want to hear their favourites. Although of course, many of us did attend with the hopes that some fan favourites of the Bad Seeds would be played, but this was a Cave and Ellis gig after all. Amongst those newer songs were scattered some older favourites, namely ‘Higgs Boson Blues’ and an incredible cover of T-Rex’s ‘Cosmic Dancer’. Cave’s baritone adds an immense poignancy to the song, and it certainly does justice to Marc Bolan’s memory. I wasn’t the only one to do a double take when I heard it start.

After two hours of playing, the final encore was a simple one. Just Cave and his backing singers appeared with no Ellis in sight. Astride his piano we were treated to ‘Into My Arms’ in what was probably the most beautiful and meaningful performance of the night. It was what most of us were there to hear after all. (I am sure that even he is sick of ‘Red Right Hand’ by now.) The standing ovation was well deserved, and I was willing to provide it alongside everyone else until Cave finally departed the stage. I sincerely hope I shall see him again.

With no support act, it was a night of pure Cave/Ellis – just how the audience wanted it.