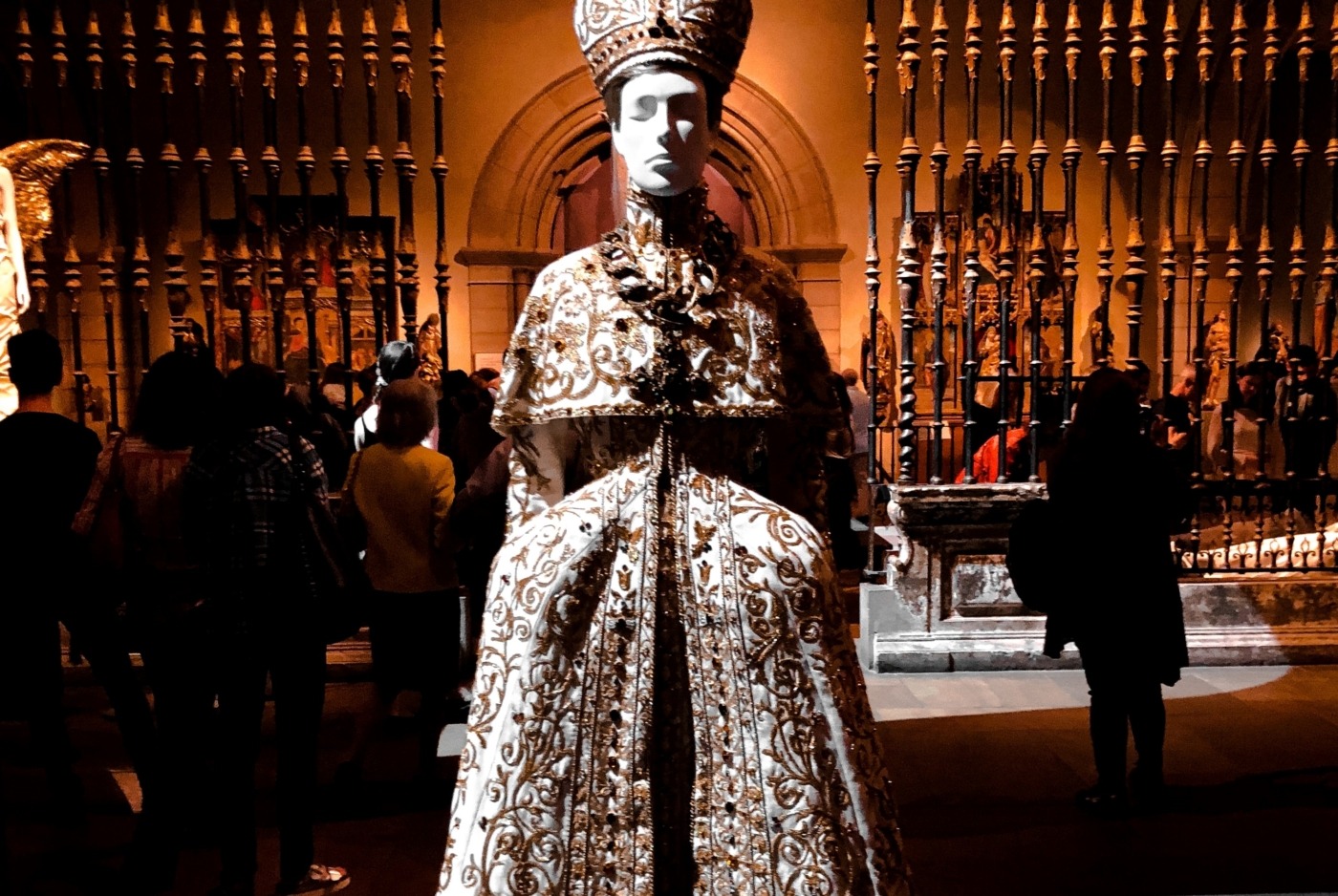 Here comes the return of the night of fashion: the Met gala. This charity ball is always the opportunity for our favourite stars and designers to fit in a vague theme. It is where iconic outfits were shown. Nobody can forget Blake Lively, Gigi Hadid, Chadwick Boseman and Ariana Grande 2018′ outfits.

This year, the theme was: “In America: A Lexicon of Fashion”. To be honest, as a European, I had no idea the United States had any fashion history. As always, some people seem to never get the memo theme, and others take it seriously (maybe too much).

This Met Gala was welcomed with open arms after the cancellation of the last one. It has been too long since we could not admire extravagant looks in a night practically created for this purpose. The main while trying to find links with a vague theme. I cannot wait for the next one in May, completing this year’s theme (precisely: “In America: An Anthology of Fashion”).

To start off, Timothe Chalamet arrived with a classic white tuxedo by Haider Ackerman with not-so-classic sweatpants and converse! Zendaya co-star kept his tradition to always create a mix of class and youthful look, the perfection. A combination meant to stay close to the young generation and to stand up as a fashion icon.

Then, the poetess Amanda Gorman gave us a bit of a prom look and a homage to the Statue of Liberty in a navy sequin “prom dress” by Vera Wang. For her first Met Gala, the young artist chooses to “wear” a book like a bag, an original and appropriate choice for her statue of hostess and poet.

Billie Eilish made a spectacular entrance. In terms of the overall style, she perfectly married the pin-up look with grace and attitude, creating a beautiful homage to Marilyn Monroe. In more detail, this ballgown dress fitted her perfectly, to her morphology and to her skin tone. She was then seen wearing a more practical but just as incredible red dress, this time with a matching cap.

These outfits, signed by Oscar de la Renta, matched her new aesthetics. Starting with her Vogue cover last May, this “Billie Renaissance” shows that she feels free to still wear everything she wants, without being forced to stick to her famous “baggy style”. Her look proved the confidence she exhilarates while adhering to the theme and the event’s grandeur.

With as spearhead Billie Eilish, the old Ollywood styles imposed itself on this year Met carpet. The Euphoria actress Barbie Ferreira showed up in a Jonathan Simkai pearl gown as an odd to burlesque. The detail of this beautiful dress is stunning, such as her in it! I think the most incredible is the corset and the shoulder. The dress is a piece of art.

Regarding shining rocks, Kendall Jenner wore a diamante dress by Givenchy in homage to Audrey Hepburn in My fair lady. Even if the movie is iconic, the mermaid dress perfectly fitted, and the theme respected, I cannot help but wonder if this look is spectacular. It seems Kendall Jenner expected’ outfit, and it took nobody by surprise, even if she looked incredible.

To stay in the theme, we had several iconic figures homage. Many looks were inspired by Josephine Baker. To cite just a few, Yara Shahidi in an ornament gown and tulle cloak by Dior or Anok Yai in a black dress and boa by Oscar de la Renta.

In terms of American fashion (even though nobody knew it existed before this year), we can site the fabric brought by the States, denim! But our stars do not just put up their favourite 501 Levi’s. Lupita Nyong’o adds a chic denim-made gown dress by Versace. Ben Platt also put his best-matched denim jeans-vest by Christian Cowan. Both did a good job staying in class and sticking to the theme.

Moving one to the rodeo of this met gala, we had a stunning look made of leather and fringe by Rosalia. Boots to cape, passing by shorts and gloves, all elements created by Rick Owens were in a beautiful scarlet tone. Jennifer Lopez chooses a similar idea but in a different colour. Brown gown, cowboy hat and belt and silver jewellery, the look signed by Ralph Lauren did not make the unanimity on social media. Some details were a bit too much, but I liked it. It stayed in theme and was spectacular enough for the Met gala.

“We do not care for the theme” clan

As always, lots of celebrities just go to the Met Gala as any other ceremony. For their defence, this year theme was difficult to respect. However, it does not give them the right to come in basic outfits. The best example being the Bieber couple, Justin and Hailey. Once again, I am disappointed by the non-risk taking of their styles. Black suit by Drew House for mister and black dress by Yves Saint Laurent for missies. Pretty outfits to any classy social events, just not the Met Gala. Lily-Rose Depp also did not take care of them. She was still beautiful in a pink Channel ensemble.

To stay in the “misunderstood genius” area, we had Frank Ocean in his Prada suits and his… green dolls? The fans of the singer say that it is a mad genius. I was a bit scared yet intrigued by the arrival of baby Shrek on the red carpet. Cody (the baby’s name) was wearing a tux from Frank Ocean new line and seems to have his/its place this night.

Breath-taking outfits or just perfect in any way, this last category present my subjective opinion on the best ensembles of this magical night.

Christian Siriano did a fantastic job on Lili Reinhart dress. A bustier draped with a pink veil decorated with 50 flowers, each representing one state of the United States. Pink is Lili Reinhart colour, and she was beautiful while perfectly sticking to the theme.

One of the most underrated outfits of this Met Gala was Saweeties jaw-dropping cropped red dress. Made by Christian Cowan, the outfit included a beautiful multicolour train representing the Black American heritage and Filipino flags.

Gigi Hadid once again did not disappoint us with a white strapless Prada gown with long leather gloves and fabulous red hair. Gigi Hadid rocked the Jessica Rabbit look!

Finally, if you need to remember only one “performance”, remember Lil Nas X and his 3 Versace gold suits. Starting with a majestic cap with flowers pattern, then transforming into a knight in shining armour with a large shoulder pad to finally unveiling the last outfit. The singer finished his performance in a slinky bodysuit covered with crystal.

You need to read the explanation:

Kim Kardashian West broke the internet, and for once, it would have been great to keep up with her interpretation. In collaboration with Balenciaga and Kanye West, she was covered head to toe in a black gown, putting in relief what is the typical silhouette of today’ American fashion beauty standard

How could Anna Wintour have approved that?

The title speaks for itself. I’ve recently learned that even if stylists buy a table and offer places to their celebrities, Wintour had to approve every outfit.

The Met Gala is also a synonym of a lot of “original” styles. Some of them try to respect the theme in their own way. We had a representation of American horse girls with Kim Petras. Her look by Collina Strada was kind of great if you put aside the horse head on her torso. We also had a “homage” to sport with a shining green dress inspired by an American football jersey by Dundas. The final touch was a football used as a bag. Sports should never be involved in the Met Gala.