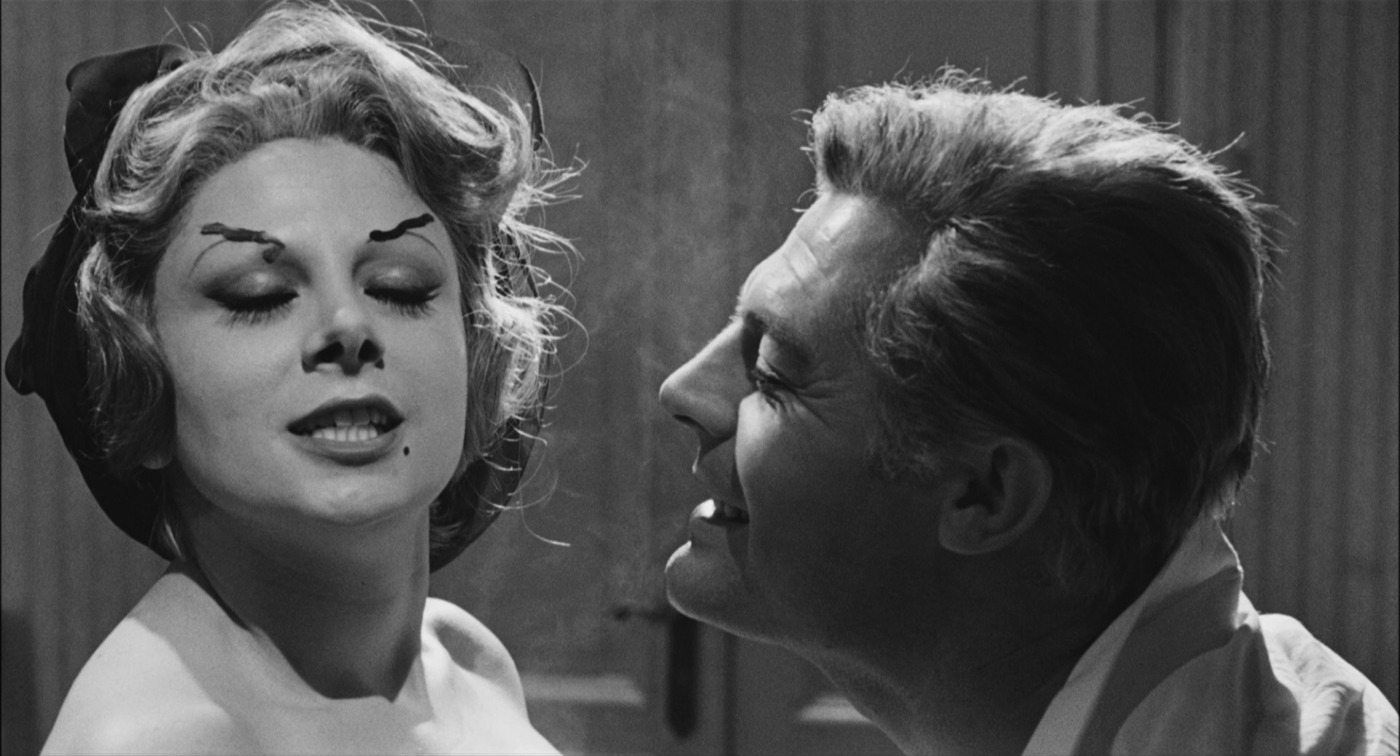 Yesterday, I watched Federico Fellini’s 8 1/2 for the fifth time. Eight hours before that, I had watched it for the fourth time. Very few films draw that much engagement from me, but there is something maddeningly indefinable about the strange atmosphere of 8 1/2 that hooks me in time and time again. I’m like a child staring at an open bag of jam doughnuts. Just writing this, I’m tempted to dive back into Fellini’s film and let the extravagant circus of strange sensual confusion start up again.

For the uninitiated, Fellini’s final black-and-white movie concerns a film director called Guido Anselmi (Marcello Mastroianni). Having achieved fame and success, the pressure is on for him to release his next movie. He does have some ideas. He’s had a giant space rocket set constructed at a cost of millions and he’s begun screen testing actors to play characters very clearly based on people that he knows (his wife, his mistress, a woman from his past). Occasionally, a beautiful nameless woman (Claudia Cardinale) appears in his daydreams, offering loose sparks of inspiration that are quickly dismissed by his production team.

Overwhelmed by the stress and anxiety of his responsibilities, Guido has retreated to a spa resort for a two-week break. His entire cast and crew follows him there. The truth is that Guido has no clue what he wants his film to be. He’s suffering from acute director’s block and overwhelming existential dread at the countless people that he’s destined to disappoint thanks to his own creative inadequacies.

As you might have guessed by now, this is a semi-autobiographical movie. Fellini himself was suffering from a creative block and decided that it would be a good narrative concept for his next project. The very title 8 1/2 refers to the fact that Fellini had made 7 1/2 movies before this one (the half refers to the two sections of composite movies that Fellini had directed in addition to his feature films).

This movie is intensely personal, meaning that it could be a deeply satisfying meditation on the life of a passionate artist or a self-indulgent pretentious slog. The film is quite content with being both. 8 1/2 is a truly exhausting movie in the best possible way. Fellini constructs his story through a disconcertingly lengthy series of maddeningly energetic and chaotic sequences. Actors, actresses, producers, writers, clerics, wives, girlfriends, best friends, sugar daddies, sex workers, mistresses, journalists, love rivals and cardinals descend upon Guido as he frequently fails to ditch all of them.

What should be a peaceful two-week spa visit becomes every introvert’s worst nightmare: every single person you’ve ever known is waiting outside your door and they all need to talk with you urgently. You can only let every single one of them down. Crucially, Fellini plays all of this for laughs. It took me a while to realise that.

The first time I saw this movie, I hated it. Really hated it. I thought it was obnoxiously lengthy, boring, beyond self-indulgent and garishly loud. Now, I consider the picture an all-time personal favourite, yet I still recognise that I was partially right on that first watch. This movie is the pinnacle of cinematic self-indulgence, but then it sort of has to be. How can you make an intensely personal movie about your own personal failings, anxieties, nightmares, dreams and desires without seeming a bit self-obsessed?

The truth is that if the premise sounds like it will annoy you, then it will. However, if you want to get wrapped up in a strikingly beautiful tale of jet-setting, affluent, gorgeous European intellectuals being caught in their own dirty webs of sexy affairs, self-absorption, carnivalesque social juggling acts and endearingly pompous pontificating, Fellini’s movie is for you. What I had once seen as hollow, extravagant self-gratification, I now see as entertaining, extravagant self-gratification.

Let’s talk about the technical side of this movie: it’s beyond stunning. Stunning, hypnotising, mesmerising, stupefying, you can keep piling the adjectives up, but none of them can capture the true majesty of the skill involved in Fellini’s grandest production. Cinematographer Gianni Di Venanzo seals his place among the canon of all-time greats with his work here. The heavenly, pearly, overwhelmingly crisp and clean white in every frame shines with the power and purity of a thousand stars. You’ve never seen a monochrome movie look as good as this. Nino Rota’s perfect, thumping, ever-present circus music swirls and dances in our ears, adding to the heightened, giddy atmosphere.

Fellini plunges us directly into Guido’s predicament in a series of lengthy POV tracking shots that hover somewhere between between a dram and a nightmare. A succession of faces – some passive, some blushing, some grinning, some demanding – stare directly at the viewer. Happy or not, angry or not, upset or not, every face in this movie wants something from Guido, even if its just a little attention. Fellini’s ingenious camera placement sees all of us watching the movie studied just as intently as the famous fictional director.

Some of these sequences will begin as though they are from Guido’s POV, hordes of hungry onlookers staring down the lens, until we realise that Guido is some distance from us, dancing away from the crowds on the edge of frame. The effect is that we emotionally connect with Guido’s anxiety on a deeper level, the audience becoming a living extension of his manic stress.

We emotionally connect with Guido’s anxiety on a deeper level, the audience becoming a living extension of his manic stress

Is this film as good as the critics say? Yes. It takes time, but the pleasures of this landmark of world cinema will reveal themselves to you if you’re willing to let them. The secret that confounds Guido for so long is that, in order to enjoy a life so fraught with tension and responsibility, you have to become a member of the eternal circus, laughing along with the absurdity of existence. To join in yourself, simply watch this movie.

As Guido himself says towards the end of the film: “Life is a party! Let’s live it together”. Being a clown has never looked so beautiful.