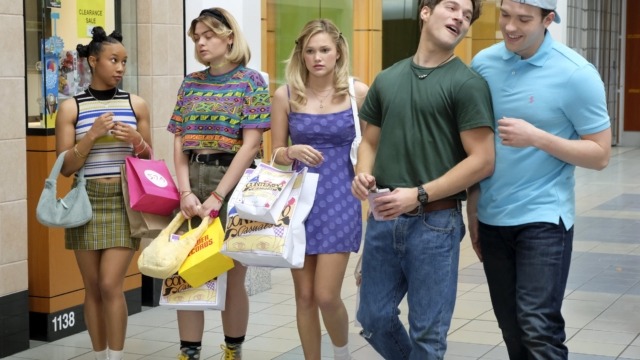 The 90s are back, baby! Cargo pants, baby tees, and double denim are back in mainstream fashion – and the TV industry is following suit. After the recent fascination with 80s nostalgia, it was inevitable that the subsequent decade would be the next era to be revived. Cruel Summer, available on Amazon Prime, jumps onto this trend and takes us back to mid-1990s Texas, pairing throwback tunes with a dark and gripping mystery.

The ten-part series takes place across three consecutive summers, with each episode covering a single day of all three years, and follows the story of two teenage girls, Kate and Jeanette. To summarise the premise without any spoilers, Kate goes missing in 1994, has been rescued by the following summer, and by 1995 is in a legal battle with Jeanette, who we see has appeared to “take over” Kate’s life in her absence. The court case centres around whether Jeanette, back in the earlier timelines, was aware of Kate’s whereabouts and made no effort to help her. It’s hard to discuss the plot without giving too much away, and as this is the sort of show where it’s best to go into it as blind as possible, so I’ll try to avoid discussing the storyline too much!

Although the crux of the drama hinges around the girls and their motivations, the series is far more plot than character driven

The first episode is not the best. The acting is a little hammy, the script a little stilted – characters don’t speak very realistically, and the plot is almost too disjointed to be comprehensible, let alone enjoyable. However, by the second episode the show seems to find its stride – there’s a definite improvement in the writing, and as more elements of the story are revealed it’s difficult not to start speculating on what’s really happened. The acting sees an upgrade too, with the cast settling into their characters and beginning to show their depth. Olivia Holt, who plays Kate, demonstrates that her talent lies beyond the Disney channel fluff that made her famous, while newcomer Chiara Aurelia holds her ground as the unreadable and multifaceted Jeanette. Although the crux of the drama hinges around the girls and their motivations, the series is far more plot than character driven. Once the credits of the final episode roll and the adrenaline of the last-minute reveals wear off, you might find yourself wondering more about the characters and why they really chose the paths they did. But the strength of the narrative goes a long way to make up for this, and it doesn’t necessarily make it harder to invest in the series.

The season ends fairly conclusively, tying up the story (with a shocking twist ending) and leaving little more to be resolved

The ‘teen TV’ genre, and specifically its popular crime-thriller-mystery-drama subgenre, produces an extremely varied quality of work. Riverdale’s immense success was driven by its initial classic mystery-solving plot, while its following seasons have become an absolutely incredible piece of what can only be described as performance art, with highlights including an organ harvesting cult, a brief zombie apocalypse, and far too many film pastiches to count. While it can’t be described as good, it’s certainly entertaining. However, it’s a relief to see that the industry is still interested in creating genuinely riveting, well-constructed series alongside the expensive and (this is said with affection) trashy TV which is so readily available on any platform.

It’s already been announced that a second season of Cruel Summer is in the pipeline, but how this will work is puzzling many fans. The season ends fairly conclusively, tying up the story (with a shocking twist ending) and leaving little more to be resolved. Some are theorising that the subsequent season will follow background characters and storylines in a similar timeframe, while others are wondering whether Cruel Summer will be the first instalment of the newly popular anthology format. Whichever way the showrunners decide to continue the series, if the quality is anything like the first season’s then it’ll definitely be worth a watch.