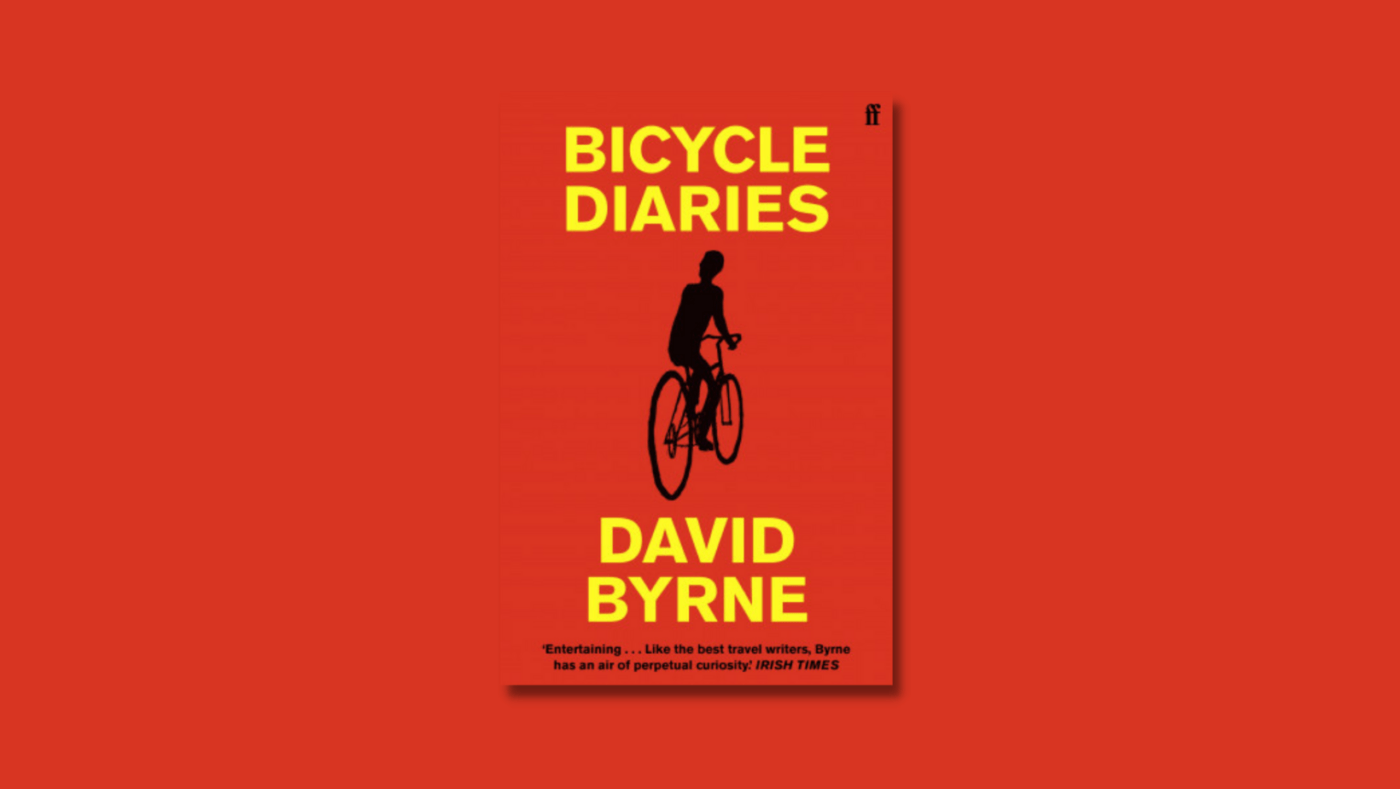 ‘Bicycle Diaries’ by David Byrne review: the case for abandoning your automobiles

There’s a moment in David Byrne’s book, Bicycle Diaries, when he describes a mass blackout in New York City. He sees the streets below his apartment block fill with cars, and hears the sound of the city transform from humming electricity, to blaring alarms. Then, he hears the sounds of people as the blackout continues, and the sirens die out. While the automobiles on the roads might have been brought to a standstill by the now darkened traffic lights, the blackout provides the people of New York with a brief moment of stillness, and a break from the normal fast pace of city life. “There’s no looting. It’s calm. People are helping one another out, and there are spontaneous parties.”

Clambering atop his bike, a faithful companion throughout the book that colours his adventures, Byrne cycles through blackout New York. It’s fun to imagine his long, somewhat gorky, figure gliding through the streets of the city, one amongst many characters, each with their own backstory and destination.
By the time you read the New York chapter, you will have nearly finished Bicycle Diaries, a book where, in each chapter, Byrne writes about his bike travels in a different city. Strangely, it is by the final two chapters that the book properly realises its intentions, where the flow feels more natural, and the reading becomes easier.

Pictures are included in each chapter of the places he visits, but it is his writing, simplistic and straightforward, in note-like prose, that really brings these locations to life

Bicycle Diaries seeks to do a lot in one book, and this means it can be hard to follow or decipher. It is unclear what the book’s aims really are. It has elements of a travel memoir, notations of artistic inspiration and some autobiographical details. All are included in Bicycle Diaries, but even if you aren’t a Talking Heads (Byrne’s band) fan, the book is still very much worth reading. If anything, Byrne’s writing barely mentions Talking Heads, but by no means is this an unfavourable omission. It shows that Byrne is capable as a warm and curious writer. He is not just a rockstar.

To read Bicycle Diaries is to see the world through Byrne’s eyes. He cycles along on his bike, catching momentary glimpses of the various cities he explores, only stopping briefly, but always coming away with something valuable. As a reading experience, the miles to be travelled in this book are vast. From Buenos Aires to London, and Istanbul to Manilla, Byrne uses Bicycle Diaries to weave together a collection of diary-like travel stories, each with a unique angle and a different story to tell.

Byrne has much to be satisfied with in this book. Relating to the reader the feeling of a particular place is a hard thing to do. Pictures are included in each chapter of the places he visits, but it is his writing, simplistic and straightforward, in note-like prose, that really brings these locations to life.

The chapters covering the rides in New York and San Francisco are the most tantalising to read. Perhaps this is because Byrne is more familiar with them. Instead of being the product of brief visits, he has had years to witness the changes in these cities, to live in them, and explore their byways on his bike. It is in these chapters where his prose becomes more passionate, which in turn makes it easier to read, compared to the more disorganised layout of previous chapters.

Bicycle Diaries realises itself fully by the time Byrne is writing about San Fran. Here, Byrne’s writing also takes on a more spirited tone, feeling more political and grounded as he becomes more fearless in expressing his opinions. San Francisco is no longer the arty and bohemian destination where Byrne began his music career in the 1970s, but is now a dull and concrete-infested place full of steep hills, designed purely for people to work. Gone is the hub of art and culture that stood there in the 1970s. Thankfully, New York is becoming more bike friendly every year, something Byrne very much celebrates, and which provides a more optimistic conclusion to the book.

Strangely, it is by the final two chapters that the book properly realises its intentions, where the flow feels more natural, and the reading becomes easier

By the time you reach the epilogue and near the end of this world tour, nothing sounds quite as appealing as taking a bike ride. Byrne himself uses the epilogue to conclude with a brief essay, updating us on some of the then recent bike developments in New York and of his own involvement, designing iconic bike racks which are now dotted around Manhattan. He also talks about how biking is about more than just getting fit or being about to get from A to B quicker, and without a car. “It’s the liberating feeling – the physical and psychological sensation – that is more persuasive than any practical argument”.

I am inclined to agree. Bike travel is unique amongst other modes of transport. It transcends the slow pace of walking, and strips away the isolation of being in a car. On a bike you feel more resolved. Things are put into perspective when you view them from atop a bike, when the smallest of movements can completely change your direction or pace. Of all the things in this varied and sometimes hotchpotch book, this is what most stuck out for me. It is where Byrne is at his best, and as such, it is why Bicycle Diaries is most definitely worth a read, if not to learn about some of the world’s most dazzling cities, then to see them through Byrne’s eyes.