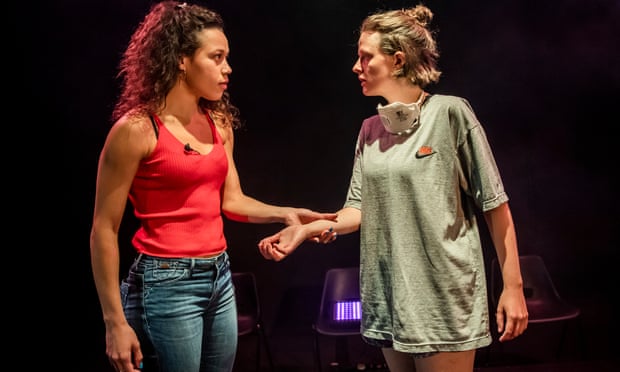 Sunnymead Court dramatises the budding attraction between two young women in two tower blocks – written, set and performed under lockdown conditions at the Arcola Theatre. As they struggle to cope with their new lives, alone, apart from the world, coincidences conspire to bring the other into each of their orbits.  The lockdown pervades throughout the play both dramatically and literally, with social distancing measures enforced on the audience as they arrive through the doors.  Lockdown is all-encompassing, and Sunnymead Court embraces this as its core thesis – and in doing so, offers something that anyone who’s lived through this experience could find valuable.

The play is a dialogue between two monologues; Stella and Marie talk directly to the audience, expositing in excruciating detail the morose minutiae of their lives in lockdown, never meeting in person until the plot draws them periodically closer together. Writer Gemma Lawrence (who also plays Marie) has managed to create a seamless narrative by weaving together Marie’s and Stella’s voices back and forth. When they finally meet and talk to each other for the first time at the end of the play, you realise these two characters haven’t talked to each other face to face the entire time. The sheer shock of such a realisation stands testament to how smoothly a rapport was built between these two separate voices.

Lockdown is all-encompassing, and Sunnymead Court embraces this as its core thesis – and in doing so, offers something that anyone who’s lived through this experience could find valuable

Moreover, there are a dearth of plays that depict attraction between women, and fewer still who do so convincingly. This play does exactly that, through writing a new love story tailored to current circumstances. A mutual attraction between two people who haven’t even met, it feels like it wouldn’t be plausible if the characters were a heterosexual pair – and perhaps that’s what makes it such a good love story.

The stage takes the corner of a small, covered outdoor venue. The only props are two chairs and a button-grid musical interface – more than enough for the actors on stage to demonstrate a mastery over the physicality of theatre. No introduction is given to Stella and Marie – its not needed. Their characters are illustrated fully from the moment they walk on stage. Marie is utterly uncomfortable in her movements, standing up and sitting down precisely five times whenever she leaves her chair, and paces back and forth across a small corner of the stage. On the other hand, Stella revels in the small space she’s been given. She bounces around the stage, dances freestyle when she feels like it, and makes direct eye contact with audience members as she banters with them.  They are so clear, so precise, in their different composures that spoken words are almost unnecessary to convey the story.

The actors manage to draw humour out of their performance, often in the smallest things. Since the characters themselves control the sound and lighting transitions, they repeatedly stop to return to the interface at the back of the stage. About halfway through, Marie forgets the right input and spends a few seconds cycling through the wrong sounds, suddenly blaring upbeat dance music before finding the sombre tune required for the scene. To simulate running down their respective tower block stairs during a power outage, they run in opposite directions around the entire stage – and Marie almost bumps into Stella, prompting an impromptu chuckle. In the final scene, they meet at a grocery store, where Marie buys a packet of Monster Munch. As she says its name, a packet of crisps flies out of the sound booth into her hands, eliciting audible laughter from the audience.

Most of the play is thoroughly detached from reality, choosing instead to explore the imaginary worlds conjured by people lacking connection

The production quality of the play is expectedly sparse. Along with a small crew and minimal equipment, the lighting and speakers ground the immersion of the play. It is subtle and understated in its use of lighting, transitioning between scenes smoothly and unnoticeably. The payoff for this comes at the end, when the first use of a sudden lighting transition augments a single moment.

The play also touches tangentially on real-world issues. The global protests for racial equality that started during lockdown mark a significant turning point for Stella, who articulates how she struggles to cope with the fact that she can’t make a difference, or have her voice heard at all, as long as she’s stuck in her home. However, the rest of the play is thoroughly detached from reality, choosing instead to explore the imaginary worlds conjured by people lacking connection.

With so few characters and moving parts, it becomes easy to identify and eliminate extraneous pieces of the puzzle as it is put together

This superb play has been carefully constructed to take advantage of its limited space and resources, and none of its constituent elements feel out of place – it’s a single, cohesive piece of art. Each element consistently reinforces the driving narrative of finding human connection in the midst of isolation.  This can be attributed, in part, to the story’s sheer minimalism: with so few characters and moving parts, it becomes easy to identify and eliminate extraneous pieces of the puzzle as it is put together.