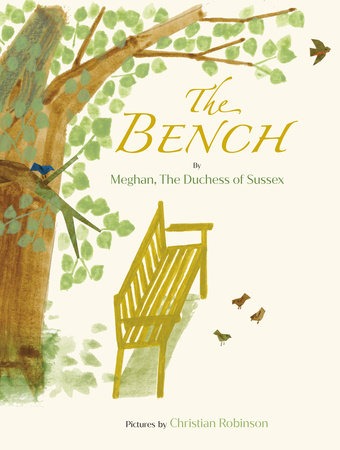 The actions of the Duke and the Duchess of Sussex regularly come under scrutiny, and Meghan’s new children’s book is no exception. Her first foray into the world of writing, The Bench seeks to capture the tenderness of a father-son relationship through verse, inspired by a poem written for her husband on Fathers’ Day.

Although clearly a deeply personal book, the sample pages of The Bench available show illustrations by Christina Robinson that resemble not just Harry and Archie. It is refreshing how the Duchess of Sussex’s debut manages to be inclusive and makes a diverse range of fathers and sons feel seen on the book’s pages.

Some claim that the sample pages show how ‘upset’ Harry feels about losing his army titles, including Phil Dampier, author of a number of books about the Royal family, speaking to The Sun. However, what I see is not a man regretful in the slightest. The Bench marks a new time in both Harry and Meghan’s life as they leave the royal family and focus on parenting.

Given the fractured discourse surrounding the family’s lives, I think, perhaps controversially, it is not out of the question that Meghan decided to write this now to simply publish her truth. This book documents Meghan and Harry’s affections for their son, regardless of what any tabloid or opinion Piers Morgan dishes out in the future which would possibly alter their child’s perception of them.

There has been a significant amount of backlash claiming the book is plagiarised. Having a similar name to The Boy on the Bench released in 2018, with the story of a boy sitting with his father plucking up the courage to go play with the other children in the playground, people are grasping at straws. One of the authors of The Boy on the Bench, Corrinne Averiss, tweeted that “I don’t see any similarities” between the story or the theme of the two books.

Furthermore, with attacks about Meghan using her notoriety on the cover – her pen name is Meghan, Duchess of Sussex – claiming that it is ‘laughable’ that she wants to cling to this title. Piers Morgan critiques the book in an article he penned for MailOnline, believing it to be inappropriate. What I think is inappropriate and laughable is how grown individuals continue to wedge themselves into a conversation that does not involve them. Unlike Piers, I do not see what Meghan’s relationship with her father or Harry’s (Prince Charles) has to do with creating a positive narrative that entertains and comforts children. Often, those who lack parental support set out to do better and create stronger bonds. By doing this, they become good role models, which is what the new book illustrates. There is a give and take, and I think it is immature to compare father-child dynamics during childhood to the relationship as adults. When we become adults, there is no dependence, expectation or rules to abide by for the child or parent. We are individuals, we grow and change, and if that results in distance, that is a part of life and it has no place being dissected when reading an innocent children’s book.

There is no reason why the book should not do well when published this month. The discourse surrounding The Bench has naturally stimulated interest, meaning perhaps those without children will pick it up, either to critique it or to add to their collections of royal memorabilia.

I am excited to see what a book that already seems to be inclusive has to offer. My hope is that it carries conversation about all types of families, not just the heteronormative. Despite its premise being about ‘the special bond between father and son’, which is personal to Meghan, I wonder if, like the illustration of black families shown in the samples, there is also the representation of trans and adoptive fathers. Like many, I am eager to take a look at Meghan’s new project, regardless of the criticism that it will undoubtedly receive, and judge it fairly, just like any other new release.