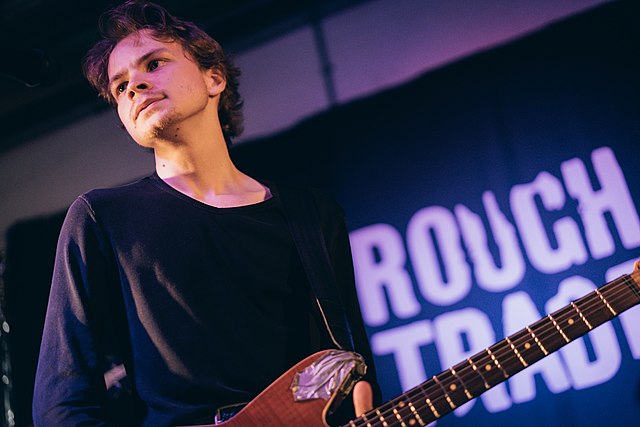 “In two years, Black Midi’s music will be unrecognisable compared to what it is today,” declared Geordie Greep, the London four piece’s subtle and sanguine lead, in a 2018 interview with Loud and Quiet. He was right, although it took a bit longer than two years. You can’t always account for pandemics.

Now we have Cavalcade, not much needs to be said. It’s a supreme album. It is eight tracks of delicious and dark post punk with a subtle yet powerful twist of jazz. Black Midi is one of the most startling and unashamedly unique post-punk bands around, although to call their latest album post-punk might be hasty. To get into even trying to describe their sound would only serve to complicate and disembody their music, but you can detect hints and echoes of many of their contemporaries in both Cavalcade and Midi’s debut Schlagenheim.

Cavalcade is as mind bending and intricate as Schlagenheim, but it’s far more than guitar-oriented punk or jazz infused progressive rock. It’s yet another album that proves how fruitless genre and misplaced comparisons with old bands are, and also how Black Midi are one of several groups earnestly trying to do something new.

Cavalcade grooves and entrances where Schlagenheim sped and bopped. The croaking and solemn vocals, synths, strings (especially the strings!), subtle bass and sax of Cavalcade schmooze us into a listening experience far different from that of their previous work. There are still those bursts of quickfire guitar hooks and riffs, but now there are also orchestral arrangements and folk inspired plucking elements, with Greep’s voice perfect for jazzier tunes like ‘Marlene Dietrich’ and ‘Dethroned’. To get into their poetic yet often bitterly soulful lyricism would require time I do not have, but Cavalcade is certainly not lacking in post punk absurdity, imagery, and chaos.

It’s also a short album, with eight songs clocking in at around forty minutes, but less really is more. The more novel sounds of Cavalcade also blend with hints at what their sound has developed from. We can still hear the memorable and intense guitar leads clear in ‘Slow’ and ‘Chondromalacia Patella’ which contrast well with the harmonious plucking and careful psychedelic build-up of ‘Diamond Stuff’ and the jazzy groove of ‘Dethroned’.

Cavalcade’s most impressive yet second-shortest song (2:53), ‘Marlene Dietrich’, is a track which utilises Greep’s potential for hushed and vibrato vocals, creating soulful and sexy jazz-rock tinged with sadness. Black Midi are teasing us with this song – the other tracks in the album are wonderful but don’t quite live up to it. ‘Dietrich’ also has a lyrical potency that is unique to Black Midi, only made more so by Greep’s sensual croaking: “And my shuddering neighbour/Turns and roughly rouses me/He says, ‘While a kiss on the lips may not make a frog a prince/An orgasm renders any queen a witch: metamorphosis exists!”

Tone-wise, Cavalcade is on the cusp of perfection. ‘John L’ provides a startling and erratic album opener. The initial hook demands instant attention and the onset of shrill strings harkens to Midi’s operatic influences. ‘John L’ and ‘Slow’ in particular are tracks worthy of the album’s title. But with such a short album and such impressive experimentation, the cohesiveness can be questioned. The tone of the album is somewhat skewed, and certainly the sound it builds up to so well with ‘Diamond Stuff’ and ‘Dethroned’ is jarred by the penultimate track ‘Hogwash and Balderdash’. This prevents any seamless flow from ‘Dethroned’ to the long yet appropriately named ‘Ascending Forth’ which brings the album to its ethereal and epic conclusion.

It’s fair to say that Black Midi’s sound isn’t the most accessible. Compared with some of their post punk contemporaries like Goat Girl, Squid or even Black Country, New Road, Midi is certainly not for more casual listening. But they cannot be faulted for this and it’s something which also vindicates them for making Cavalcade such a brief album.

Cavalcade’s sound tells of a band who are still evolving. The listener is left with no doubt that Greep’s 2018 statement still rings true: their next LP will have a sound that, if not totally different, will be at least beautifully and tantalizingly transmogrified from the math rock, tinges of folk, jazz, art-rock, and avant-prog experimentation of Cavalcade. That experimentation is the component which perhaps will linger the most, but it’s also the hardest component to pin down in Black Midi’s sound, especially considering how Black Midi stand among contemporaries who are known for not just bending but disregarding the bounds of genre. Bearing this in mind, I for one cannot wait to see what comes next.