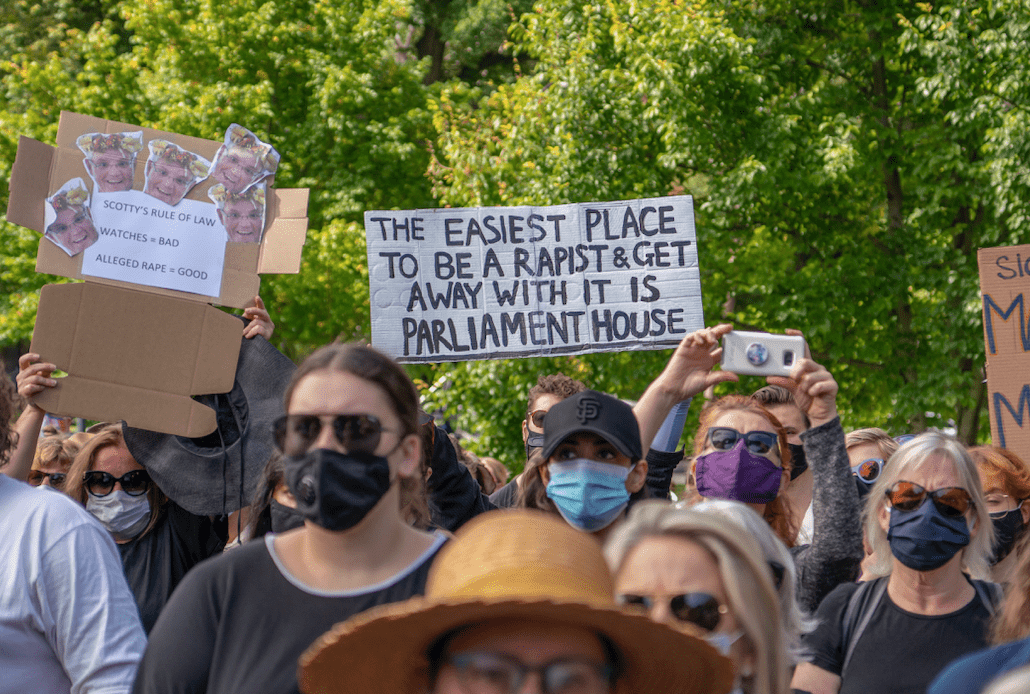 When Brittany Higgins spoke out about how she had been attacked by a male colleague in a government minister’s office in 2019, it sparked a wave of other women to come forward with their experiences of alleged sexual assault and harassment in Australian politics.

Higgins was 24 years old and only a few weeks into her “dream job” when she was taken to Parliament House by a senior colleague after a night out in March 2019. Heavily drunk, she had fallen asleep in the minister’s office and then woke up to find a man sexually assaulting her.

The man was subsequently sacked, but not for the alleged assault – rather, for breaching office security with the late-night visit.

Higgins told her boss, Linda Reynolds – the Defence Industry Minister at the time, that she had been sexually assaulted. Though Reynolds has said that she offered support to her aide to go to the police, Higgins said she felt pressure that if she did, she would lose her job.

After Higgins spoke out, Reynolds called her a “lying cow” and ended up paying compensation and donating to a sexual assault charity as settlement for a legal case by Higgins against her. Reynolds said that she “did not mean [the comment] in the sense it may have been understood”, and apologised to Higgins. The former aide said that she will put part of the settlement towards an organisation that provides counselling and support for survivors of sexual assault and abuse.

In my mind his government was complicit in silencing me. It was a betrayal. It was a lie

Higgins said she had felt “silenced” by the Liberal Party, which is the larger, dominant party in Australia’s coalition government. However, she said she decided to speak out after seeing a photo of Prime Minister Scott Morrison in January celebrating the activism of a sexual assault survivor: “He’s standing next to a woman who has campaigned [for survivors’ rights] … and yet in my mind his government was complicit in silencing me. It was a betrayal. It was a lie.”

A day after Higgins came forward, Morrison apologised for the way her complaint had been treated by the government two years ago and promised inquiries into Parliament’s work culture and support for political staff. However, he sparked public criticism when he told reporters that his wife “said to me: ‘You have to think about this as a father. What would you want to happen if it were our girls?’”

Morrison’s framing of the issue was condemned, with many asking why he needed to think of Higgins as someone’s daughter before he could empathise or take her account seriously. Morrison later acknowledged that “many had not liked or appreciated” his comments, but insisted he was committed to driving broad cultural change.

Morrison and his ministers were also accused of skirting questions about who within the government knew what and when, and why they didn’t do more. It has since emerged that several people in Parliament House knew about the alleged crime, including at least three cabinet ministers.

Further criticism emerged when Morrison disputed Higgins’s recollection of one of his advisers “checking up” on her. Higgins replied that: “the continued victim-blaming rhetoric by the prime minister is very distressing to me and countless other survivors.”

Since Higgins spoke out, another four women have come forward to local media to accuse the same man of sexual assault or harassment.

One of those women said that she had been raped by the man in 2020 after drinks and dinner with him. She said that: “if this [Higgins’s case] had been properly dealt with by the government in 2019 this would not have happened to me.”

Another woman, an election volunteer, said she was raped by the man after a night out in 2016 – while a third woman said the man had stroked her thigh during a group dinner with colleagues in 2017. She made a report to the police after seeing Higgins speak out.

A fourth woman then came out and said she had felt pressured by the man to have sex in 2014, suggesting that this has been a long-running issue.

Penny Wong from the Labor Party and Sarah Hanson-Young from the Australia Greens, two opposition senators, referred a letter they had received to the Australian Federal Police. This letter alleged that Attorney-General Christian Porter had raped a 16-year-old girl in 1988. The woman went to New South Wales Police last year, but an investigation was suspended after she took her own life last June, aged 49.

Last week, friends of the woman wrote a letter to the prime minister and other lawmakers, urging him to establish an independent investigation. The letter argued that this was needed because police would most likely not be able to launch an investigation due to criminal cases typically requiring testimony from a complainant, which was not possible as the woman had died. The letter claimed that: “failure to take parliamentary action because the New South Wales Police cannot take criminal action would feel like a wilful blindness.”

However, Morrison declined to establish an independent investigation, insisting that it was a matter for the police. He told reporters that: “the individual involved here has vigorously rejected these allegations and so, it’s a matter for the police.” He continued on to say that: “there was nothing immediate considered that was necessary for me to take any action on.”

Porter has strongly denied any wrongdoing and claimed that he has retained Morrison’s support as attorney general. Porter said that he didn’t think he had ever been alone with the woman and had no contact with her since January 1988. Porter went on to say: “If I stand down from my position as attorney general because of an allegation about something that simply did not happen, then any person in Australia can lose their career… based on nothing more than an accusation that appears in print.”

Police confirmed that there was “insufficient admissible evidence to proceed” with a case and they have “determined the matter is now closed.”

Shortly after these allegations, videos emerged of staff members performing sex acts in Parliament, leading to one senior aide being fired. The videos were leaked by a former government staff member, who added that people had used the prayer room to have sex and even brought sex workers into Parliament.

Morrison responded that: “we must get this house in order. We must put the politics aside on these things, and we must recognise this problem, acknowledge it, and we must fix it.” But the government’s handling of the crisis was questioned after backbench MP Michelle Landry said that she “felt sorry” for the fired aide.

All of this recent news has reignited wider questions about Australian political culture, with critics saying that the government had been too slow and ineffective in responding to wider accusations of sexism and misogyny in parliamentary culture.

[Australia’s Parliament is] the most unsafe workplace in the country

Some have spoken out about the misogyny they experienced while working at Parliament. Julia Banks said that it involved: “mansplaining, talking over women, inappropriate jokes [and] inappropriate touching.” She went as far as to say that “it is the most unsafe workplace in the country.”

Sarah Hanson-Young recently won a $120,000 judgement against a Senate colleague, David Leyonhjelm, for defamation after he shouted “stop shagging men” at her on the floor of the chamber in 2018.

Emma Husar had her political career ended after a Buzzfeed article claimed that she had been bullying staff members and once uncrossed her legs to show she was not wearing underwear in front of a male colleague, despite both her and the male colleague denying that ever happened. When Husar sued for defamation, Buzzfeed apologised and removed the article, but the story went viral and Husar was forced by her party to step aside and not run again in 2019.

Public pressure remains high with calls for more action from the government, with some suggesting reforms for parliament to create more equality. Karen Andrews said that gender quotas for political representatives should be considered, an idea which Morrison indicated he wouldn’t be opposed to.

However, Morrison did draw criticism for publicly airing a previously unreported sexual harassment complaint at a media organisation, with opponents accusing him of “weaponising” the complaint. Labor Senator Katy Gallagher asked: “What about the woman at the heart of that complaint now? National news.”

Tens of thousands of Australians took part in 40 linked rallies

Public response culminated in dozens of “March 4 Justice” protests held across Australia in mid-March, triggered by the sexual assault allegations against men in Parliament. Tens of thousands of Australians took part in 40 linked rallies, with the protestors demanding “full independent investigations into all cases of gendered violence and timely referrals to appropriate authorities.”

Janine Hendry, one of the organisers of the protests, said that: “the government appears to be completely out of their depth and unwilling to listen to the concerns of everyday women. And worse, there appears to be a culture of denials and cover-ups. We are calling for transparency and action.”

Hayley Foster, CEO of the advocacy group Women’s Safety NSW, said that in Australia: “98.5 percent of sexual predators will not be held to account and will be considered innocent in the eyes of the law because our criminal justice system is so inaccessible. It’s so ineffectual at providing a just result for sexual assault survivors.”

Morrison offered to meet a small delegation of organisers in his office, but the organisers refused, saying “we will not be meeting behind closed doors.”

Morrison said: “those who gather here today and around the country do so out of a sense of great frustration and great concern … That’s deserved frustration and concern that I share.” However, his claim that the rallies were a “triumph of democracy” because protesters were not “met with bullets” like in some other countries, was met with criticism. The Labor Party’s Tanya Plibersek, the shadow minister for women, said that the prime minister had “profoundly” missed the point, as the comment that “we should be grateful, that we are in a place that you don’t get shot for marching, was so off the mark.”

Higgins has now filed a police complaint, saying that she is “determined to drive significant reform” in how parliament handles cases like hers. She said: “I believe that getting to the bottom of what happened to me and how the system failed me is critical to creating a new framework.”