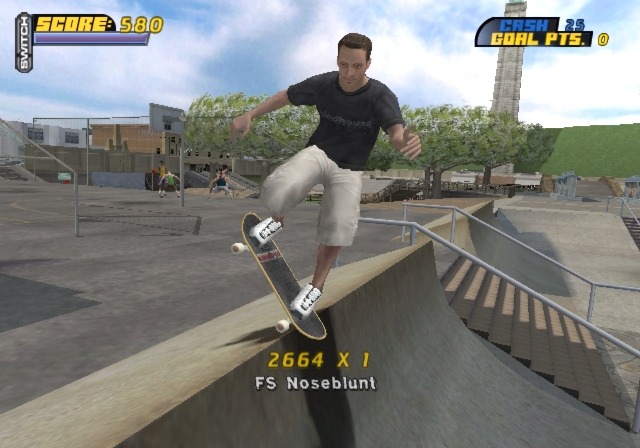 The low rumble of a skateboard’s wheels on concrete. The sharp cracking sound of a perfectly executed kickflip. These sounds are as nostalgic to me as much as Fall Out Boy’s better albums, Christopher Eccleston piloting the TARDIS, and my mom’s apple crumble with custard.

I’ve written in the past about my love of narrative media and the video games that challenge its conventions, but this game is something else entirely. An uncomplicated, no-fuss, unpretentious game that accounts for about 70% of the positive memories of my childhood (and that’s a conservative estimate).

The unadulterated rush of Tony Hawk’s Pro Skater 4 comes from its fantastic mix of arcade-style immediacy and total freedom. You skate through expansive environments, picking up goals when it suits you. Complete enough of these goals and you advance to the next level. Whereas the earlier games in the Pro Skater series imposed an arbitrary two-minute time limit for claustrophobically small environments, the glorious fourth entry jettisoned the time limit and boosted the size of the levels, giving you interactive worlds to explore and master at your leisure.

There are far too many video games that don’t let you have fun right away. Lengthy, hand-holding tutorials and 30-minute long introductory cutscenes are an annoyingly persistent video game pest. Sometimes we just want immediate freedom to explore and experiment free from rules and walls. Pro Skater 4 gives you this freedom.

This is true, intuitive, gaming that respects the player’s abilities

The first level, College, is quite possibly the greatest first level of any video game. A large, colourful map that allows you to grind the tops of high rails, skitch on the back of a speeding car, plummet across the sky on a high wire and even play a game of tennis with a skateboard for a racket, College becomes a virtual home within seconds.

This multifaceted stage operates on three levels: the grimy depths of the sewer system acting as a series of half-pipes, the streets and bridges of the campus allowing you to practice stringing together combos, and the tops of the various lecture halls and humanities buildings acting as perilous platforms for death-defying feats of skateboard wizardry. Within 4 minutes of your PlayStation 2 lighting up, you’re performing inhuman acrobatic stunts and learning the intricacies and subtleties of the controls with no tutorials or practice sessions. This is true, intuitive, gaming that respects the player’s abilities. Eventually, you’ll be able to talk to enough people and complete enough Jackass-style outrageously fun missions to progress to the next level. Then the fun starts all over again. And again. And again. And again.

Pro Skater 4 has nine giant levels, taking you on a globe-hopping journey from Alcatraz Prison to Trafalgar Square. Fancy busting tricks on Nelson’s Column, riding a shopping cart down the slopes of America’s most notorious prison, falling into a secret hellworld in a spooky Carnival and jumping off a folding bridge onto the deck of a ferry on the Chicago river? Surprisingly enough, these things and more are possible in the expansive, emancipatory worlds of Pro Skater 4. The sheer volume of secret areas, cheats, hidden characters (including Jango Fett), video extras and bizarre special tricks just adds to the wealth of experience and infinite replayability that the game offers.

I haven’t even talked about the multiplayer yet. I could not possibly recount the hours of fun I had on the King of the Hill mode, where players bash into each other to steal a giant crown. Oh, and don’t forget the music – it’s an emo/pop-punk child’s dream. They may be obscure names to some but if you grew up with the right material, songs by Goldfinger, Less Than Jake, Agent Orange and The Bouncing Souls are timeless sing-along anthems. With these immortal tunes complimented by choice cuts from N.W.A, AC/DC, Iron Maiden, System of a Down, The Sex Pistols and Public Enemy, Tony Hawk’s Pro Skater 4 packs an intimidatingly strong playlist to accompany your hours of skating bliss. If it wasn’t clear enough by now, this is my favourite game of all time. You can play it seriously by focusing on the goals or just spend 30 minutes messing around by jumping over the penguins on the Zoo level with the disco mode cheat, turning the entire level into your own glowing dance floor. Total freedom, total fun.

The later games in the series got a bit too silly. As much as I like the Tony Hawk’s Underground games, it almost feels as if it gives you too much to do while still being restricted. Wacky vehicles and increasingly abstract missions left you dazed and confused, while ill-fitting storylines stopped the game from feeling like your own personal experience. These are still incredibly fun, genuinely impressive video games, with expansive levels and a whole new host of tricks and abilities (including the earth-shattering supernatural power of being able to actually get off your skateboard), but they never quite recaptured the laid-back magic of the fourth entry in the series. After the glitchy nightmare of the experiments with motion controls in Ride and Shred, the Tony Hawk series finally copped it with the utter failure of Pro Skater 5, a game that was universally panned and apparently unfinished. However, with the release of Tony Hawk Pro Skater 1 + 2 last year as a remastered version of the originals, the series has had a resurgence, opening up the door for more remasters in the future.

In evaluating the series’ greatest titles, Pro Skater 3 is often singled out as the very best. Its wonderful levels, including a Tokyo skatepark and the icy wilds of Canada, are worthy of huge praise, but it has a crucial flaw that stops it one pop shove-it short of perfection: the two-minute time-limit. This unnecessary restriction is the worst element of the arcade influence that shone through in the series’ earlier titles.

Pro Skater 4’s decision to rid itself of all limitations and emphasise the immediacy and freedom of the experience of skateboarding makes it the very best entry in the series and my favourite game.